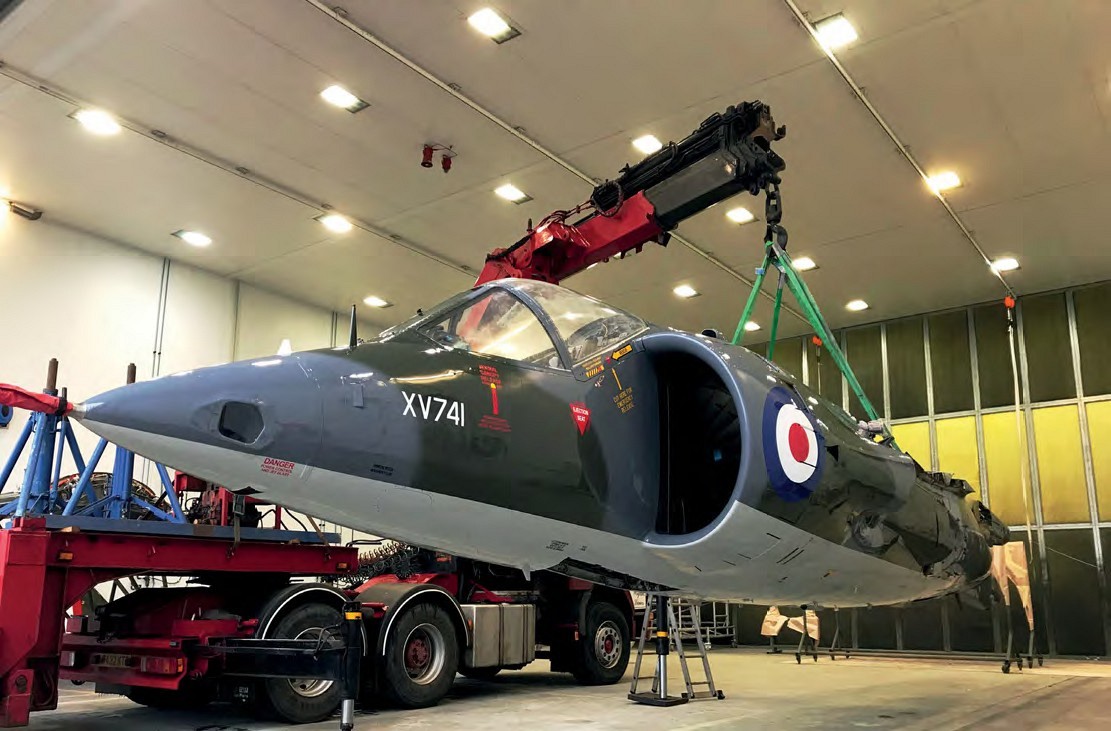 The immaculately restored fuselage of Harrier GR1 XV741 with the unusual duplication of the serial number on the nose, as was seen during the Daily Mail race in May 1969. JET ART INSET: Sqn Ldr Tom Lecky-Thompson getting airborne from the St Pancras coal yard in XV741 on 4 May 1969. Coal dust was found inside the fuselage during restoration.
KEY COLLECTION

Hawker Siddeley Harrier GR1 XV741, which made fastest time on the east-west leg of the 1969 Daily Mail Trans-Atlantic Air Race, was due to arrive at the Brooklands Museum in Surrey on 1 April.

After reassembly, the historic Harrier — the fourth production aircraft — will go on show next to Vickers Vimy replica NX71MY in a trans-Atlantic exhibition called ‘First to the Fastest’, which will celebrate the 100th anniversary of Alcock and Brown’s pioneering Vimy flight in 1919 and the 50th anniversary of the May 1969 Daily Mail race.

The Harrier has been restored by Jet Art Aviation in North Yorkshire for its owner, who was passionate about having the aircraft returned to its 1969 configuration.

Delivered to RAF Wittering in April 1969, it was flown in the race by Sqn Ldr Tom Lecky- Thompson and subsequently modified to GR3 standard.

After retirement XV741 went to the School of Aircraft Handling at Culdrose in April 1991. Eleven years later it was put up for disposal by competitive tender and acquired by Jet Art. Placed with a new owner, the demanding project to convert it back to 1969 spec began.

Although it had been stored outside for several years, it still had the engine and the cockpit was complete, and with so few GR1s surviving it was decided to restore XV741 to top-class museum standard.

In September 2012 the Harrier was moved north to the Jet Art workshop. The restoration team spoke to members of the Harrier groundcrew from 1969, and studied pictures to establish what special equipment had been fitted for the race. A very rare GR1 nose cone with pitot was obtained from an owner who had it as an ornament in his front room, and a matching pair of wingtip ‘ferry tip’ extensions, which were fitted to XV741 for the race but saw little further use, were sourced and added. The radar receiver was removed, which required the drilling-out of hundreds of rivets to remove the structure.

An early GR1 fin cap was acquired, as was a pair of 100-gallon drop tanks with early-type tail fins. It proved impossible to source an early-type tail cone fairing, but the Harrier Heritage Centre at Wittering loaned the tail cone from its pre-production Harrier, and XV741’s fairing was reverse-engineered with the help of a local craftsman.

In order to get an exact paint finish, the job was contracted out to specialist painters from Serco at RAF Marham. The airframe was totally stripped, some areas having to relinquish a total of 17 layers of paint. It then received chromate yellow primer, followed by high-gloss dark green/dark grey upper surfaces and light grey undersides.

When XV741 first entered service it had Hawker Siddeley stencils and markings, in a different font to that subsequently used by the RAF painters and finishers.

Members of the Tangmere Military Aviation Museum in Sussex re-created the stencil pack, digitally creating each marking to match those on XV741 when it left the factory.

Tamalie Newbery, the Brooklands Museum director and CEO says, “We are delighted to have XV741 on display at Brooklands, and to be bringing together these two famous aircraft. They represent the astoundingly rapid development of aviation from the first ever non-stop crossing of the Atlantic in 1919, in a Brooklands-built Vimy, to the V/STOL Harrier.”