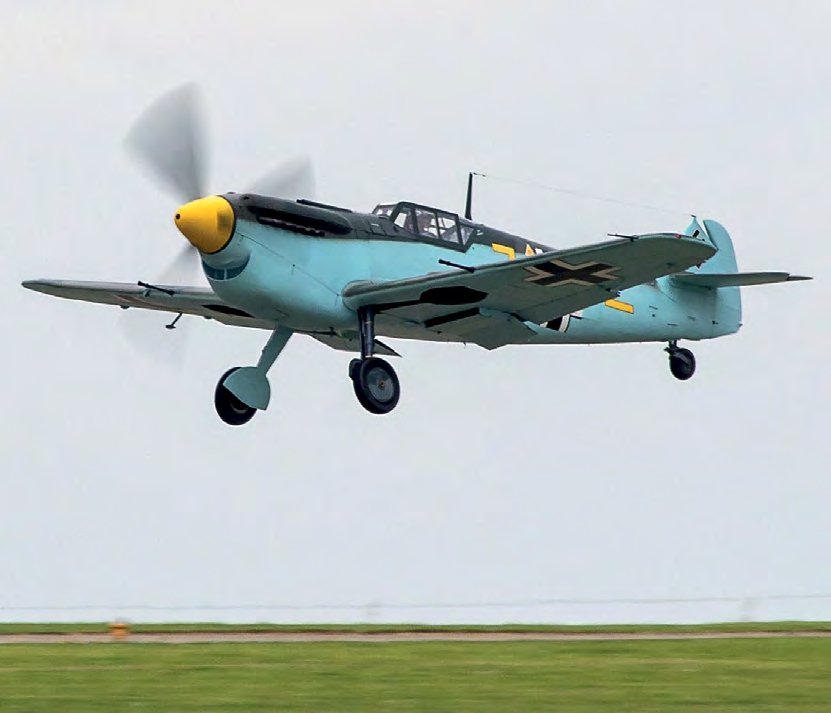 Looking like a still from Spanish location shoot during production of the Battle of Britain film, Buchón ‘Yellow 7’ gets airborne from Sywell with Richard Grace at the controls on 3 May.
ASHLEY STEPHENSON

Hispano HA-1112-M1L Buchón C4K-99/ G-AWHM ‘Yellow 7’ made its first flight for nearly 50 years at Sywell, Northamptonshire, on 3 May with Richard Grace at the controls. The ex-Spanish Air Force and Battle of Britain film fighter has been restored over the past year or so by Air Leasing at Sywell, and is now based alongside the two-seat HA-1112-M4L Buchón, C.4K-112/G-AWHC ‘Red 11’, which took to the air following restoration by Air Leasing at the same location on 24 November last year.

The two aircraft are part of the famous haul of former Battle of Britain film Buchóns that were given to film pilot Wilson ‘Connie’ Edwards as part-payment for his work on the movie, and were stored on his ranch in Big Spring, Texas from early 1969 until they were finally put up for sale during 2014.

Richard Grace, the manager/chief engineer at Air Leasing, said of the first flight, “It flew beautifully. There were no problems at all, which doesn’t normally happen. The aircraft was in good condition, so it didn’t require a rebuild, just a restoration. Restoring something so original is one of the delights. The Buchón is easy to work on: when an aircraft is well designed, it is relatively easy to restore. When they painted it for the film, they didn’t prepare the surfaces underneath, which made paint-stripping easy. But the original scheme, which had survived since 1968, gave us a good reference point to replicate the film colours.”

The next Buchón to emerge from Air Leasing will be C.4K-145, which will fly in the markings of a Luftwaffe III./ JG 52 Messerschmitt Bf 109F-4, ‘White 9’, flown by 80-kill ace Uffz Edmund Rossmann during September 1941. It is expected to make its maiden flight during June, and it is hoped it will appear alongside ‘Yellow 7’ and ‘Red 11’ at the Flying Legends show at Duxford on 14-15 July.