Details of the fiscal year (FY) 2018 US defence budget, released on May 22, show that airpower spending, while increasing, will stay on the course set in the last year of the previous Obama administration. By and large, the additional funding requested by the Trump administration is not intended for more aircraft, but rather on investment in readiness and, secondarily, research and development.

While the total bottom-line funding request was 3% greater than the Obama administration had planned for the year before, the new budget request is still facing significant issues. These include the problems of the sequestration caps imposed by the Budget Control Act, compounded by the uncertainty imposed by Congress’s unwillingness to pass a budget or send a defence appropriation bill to the president for signature, as well as the unresolved issue of providing a stream of funding for the long-delayed upgraded of the US nuclear deterrent that still remain.

While Air Force Vice Chief of Staff General Stephen Wilson said in Washington DC on May 25 that the deterrent will only absorb 3.7% of total planned defence spending over the next 20 years, the bow wave of developing and producing multiple new systems is going to be highly disruptive to other priorities. These unresolved problems are reflected in a delay in issuing a new Future Years Defense Plan showing planned procurements over the next five years, and underline how the ability of the Department of Defense and the Services to plan has been greatly limited by budget and political uncertainties.

On June 5 in Washington, Heather Wilson, Secretary of the Air Force, said the Air Force total request for $183 billion – a 6.9% increase – aims to “start to restore readiness and modernise the force”, in that priority order. Only recently sworn in to her new job – the Army and the Navy have yet to receive their new service secretaries – she made no apologies for putting readiness first, both for personnel and aircraft. Compounding the problem is the Air Force’s continuing commitment to carry out combat operations. Secretary Wilson pointed out that of the 26,000 total sorties that have been flown against ISIS forces since 2014, 70% were conducted by the US Air Force. Aircraft from all services have a high operational tempo. Recent high-profile deployments to Europe and northeast Asia suggest these will continue to consume much of FY2018’s funding. Secretary Wilson said: “It is unlikely the need for aerospace power will decrease over the next decade.”

Air Force aircraft procurement funding – $16.17 billion – represents a 1.4% decrease from last year, as spending will be largely directed towards operations and maintenance funding. This will allow dropping the long-standing and controversial plans to retire the A-10 Thunderbolt II (and increasing its airframe life from 8,000 to 16,000 flight hours) and the U-2R reconnaissance aircraft in the near future. Upgrades for F-15C and F-15D Eagles and F-16C and F-16D Fighting Falcons (including fitting the Northrop Grumman APG-83 active electronically scanned array radar) are also included.

A pilot shortage in the US Air Force, especially of fighter pilots, will be addressed through funding of increased retention bonuses (the first expansion of this programme since 1999), reduction of nonflying duties and increasing the numbers of incoming trainees, with the goal of increasing annual production of new pilots from 1,200 to 1,400. Two new F-16-equipped training squadrons will be established at Holloman Air Force Base, New Mexico. Secretary Wilson said additional maintainers to enable increased availability are “absolutely critical”. The budget request funds 92% of the required number of US Air Force flight hours, up from 90% last year, but the shortage of maintainers is one of the main reasons why it cannot be brought closer to 100% of requirements.

Increased operational funding will allow for additional deployments. For example, Secretary Wilson said: “Air National Guard F-16s will go to Europe in January for three months for training with our allies.”

The highest priority US Air Force procurement programme is reflected in a request for 46 F-35A Lightning IIs, two more than planned last year. Air Combat Command had wanted an early ramp-up to 60; Lieutenant General Arnold Bunch, Chief of Air Force acquisitions, said in Washington DC on June 5 the service wants to get to 60 as quickly as it can.

For the number two Air Force priority procurement programme, 15 Boeing KC-46A Pegasus tankers included in the budget request mean it remains on track, though the Air Force is concerned the first deliveries, scheduled for December 2017, may slip by two months.

Reduction in the procurement of the Lockheed Martin Hercules – five special operations MC-130J Commando IIs and two HC-130J Combat King II tanker versions – like many of the reductions this year, reflects planned ramp-down of multi-year procurements. The 16 General Atomics MQ-9 Reaper unmanned air vehicles represent a reduction of eight from the previous year. Increasingly important for air operations is investment in cyber warfare capabilities. According to Secretary Wilson, the Air Force has “funding for 39 cyber operations teams in the budget, an increase”. 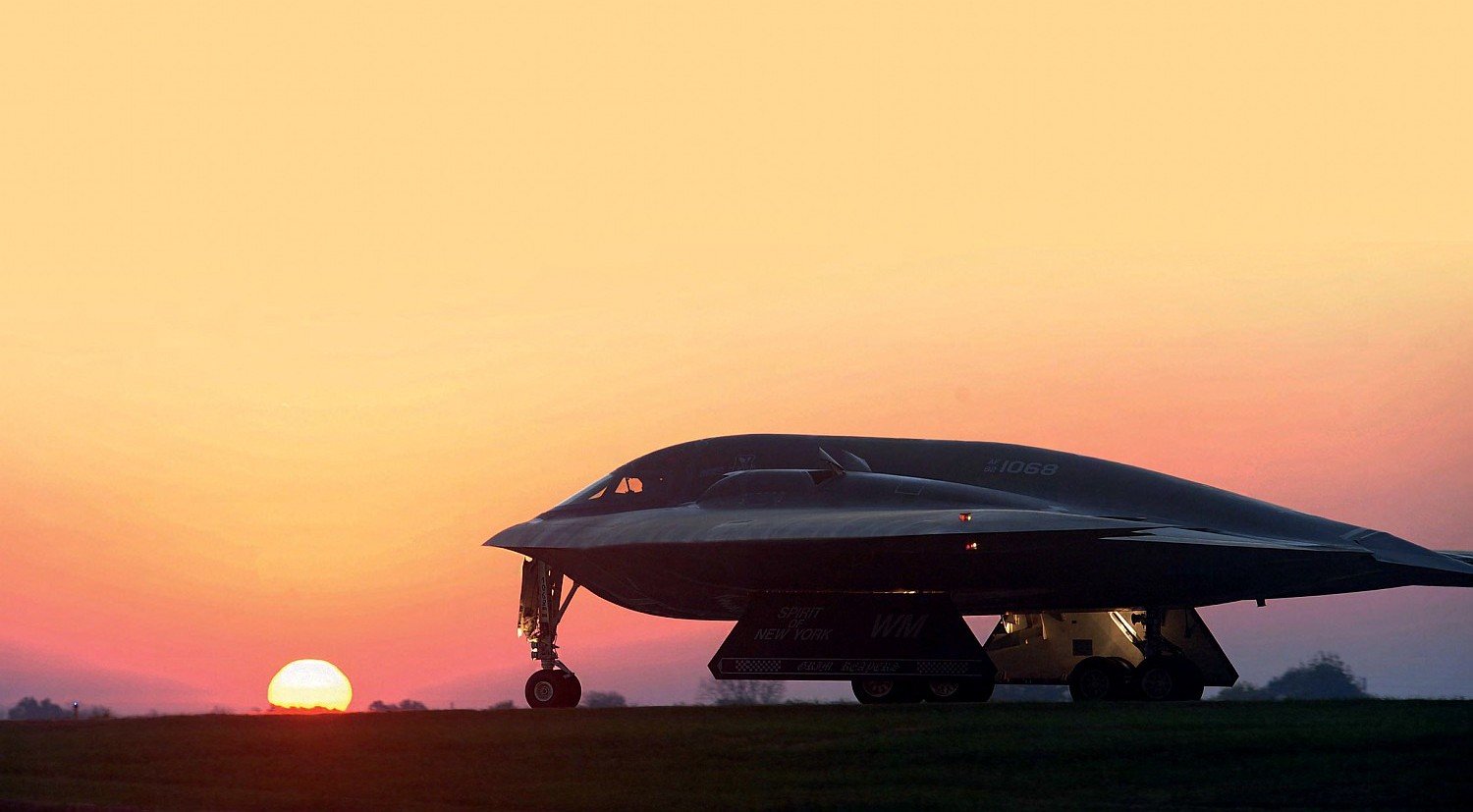 Concern about the US Air Force being able to meet the threat posed by a near-peer adversary are reflected by a near-term spending increase for B-2 Spirit bomber upgrades contained in the FY2018 US defence budget request.
Airman 1st Class Joel Pfiester/US Air Force 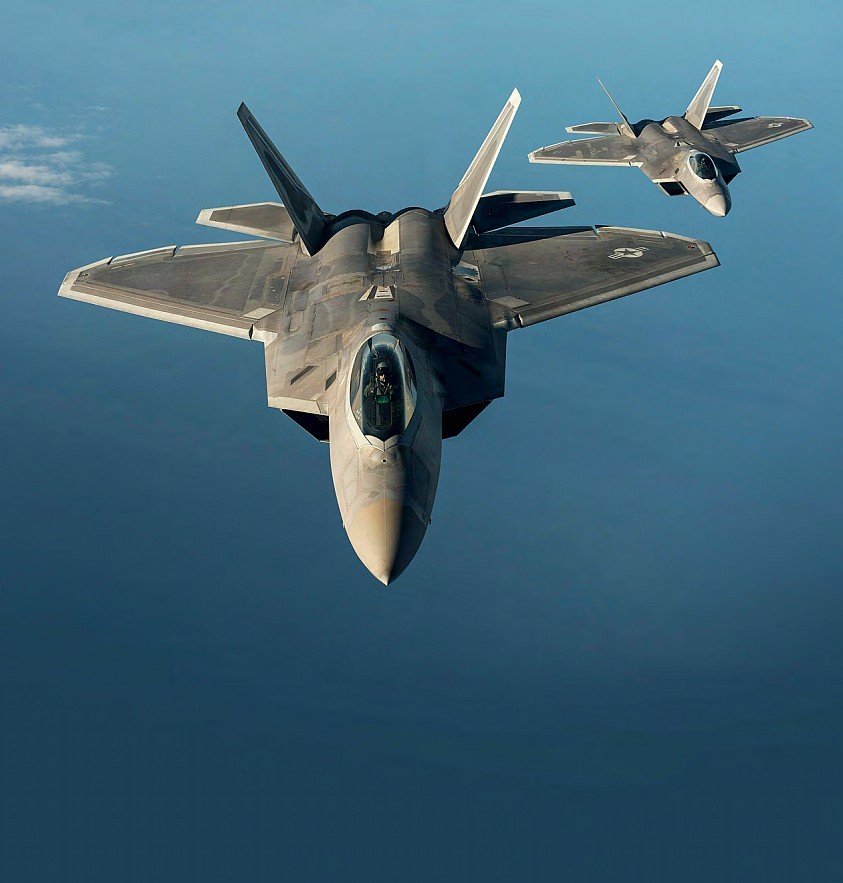 Lockheed Martin has proposed upgrades to the low-observable external coating of the F-22. Issues with the coatings contributed to a 60% mission capable rate in 2016.
TSgt Jason Robertson/US Air Force

Procurement of EADS North America LUH- 72A Lakotas, however, will increase to 13. None was procured the previous year.

The US Navy and US Marine Corps shared the overall focus on readiness and research and development rather than increasing procurement. The two services requested $15.2 billion (a 6.8% decrease from the previous year) to procure 91 aircraft in FY2018. Twenty F-35Bs (up from 16 the previous year) for the Marine Corps and four Navy F-35Cs indicates the proposed accelerated ramp-up in F-35B production to replace non-flyable F/A-18s will not take place this year. Lieutenant General Jon Davies, Deputy Commandant for Aviation, US Marine Corps, called the current production rate “anaemic”. He had wanted to see more procured, as had Senator John McCain, chair of the Senate Armed Services Committee.

Fourteen F/A-18 Super Hornets requested in the FY2018 is a reduction from the 26 total (request and plus-ups) in the previous year. The US Navy also requested five E-2D Advanced Hawkeye radar aircraft and seven P-8A Poseidon maritime surveillance aircraft (down from 17, but one more than planned a year before).

Unmanned air vehicle systems included in the FY 2018 request include four Insitu RQ-21 Blackjacks, and three MQ-4C Tritons. Northrop Grumman MQ-8C procurement was reduced to zero. In addition, there is funding to address readiness and sustainment issues affecting Navy and Marine aircraft, especially F/A-18 Hornets. Reducing the long-term maintenance backlog has been identified as a priority in the budget, but depots are already working at full capacity. For this reason, the depot maintenance accounts only have a 5% increase in the budget request.

The budget’s secondary growth area in research and development (R&D) enabled substantial increases in funding for the Air Force’s Northrop Grumman B-21 Raider bomber (a $645 million increase). Raider is currently the number-three Air Force priority programme and, along with the Long- Range Stand-Off Missile that will arm the new bomber, is seen as vital in upgrading the air-breathing component of the US strategic deterrent triad.

The Next Generation Air Dominance programme (a $394 million increase) has also ramped up, which could lead to a sixth-generation fighter design. The Presidential Aircraft Replacement programme had its R&D funding funded at $434 million and the E-8C JSTARS (Joint Standoff Target Attack Radar System) and the HH-60W combat rescue helicopter also saw substantial increases. On May 30, the Air Force announced the HH-60W had successfully completed its air vehicle critical design review and has entered a 75-month engineering and manufacturing development (EMD) phase, funded under a $1.28 billion contract awarded in 2014. Total HH-60W production will be 112 helicopters, nine of which will be used for testing during EMD. Developmental testing is scheduled to begin at Eglin Air Force Base, Florida, in 2018.

Near-term spending increases in B-2 Spirit bomber and F-22 Raptor upgrades reflect concern for being able to meet a near-peer adversary. Funding is also provided to look at a re-engine programme for the B-52H Stratofortress bomber. As General Wilson said: “The B-52 will continue to fly through the 2050s.”

In the unclassified purple world, Secretary Wilson said: “A number of long-term future technologies are funded, including hypersonics.”

General Wilson said the “budget is a step in the right direction”. How much of the budget request the Congress will actually fund and what the Congress will add – all the services submit unfunded priority lists – both remain uncertain. Trump administration allies in Congress have said it is likely the budget request will be altered considerably. On May 24, Senator McCain said: “Any military build-up is impossible as long as the Budget Control Act remains the law of the land.” Even if the annual defence authorisation and appropriation bills are not signed into law, their provisions can be incorporated into an omnibus spending bill if this is what is required to keep the US Government functioning to the end of the year.

Germany has requested official briefings on the F-35 Lightning II as part of its efforts to identify suitable aircraft for its Future Combat Air System requirement. This would replace the current force of Panavia Tornado strike aircraft as they reach the end of their service lives. The F-35 appears to be the only potential aircraft that could take over the Tornado’s current nuclear delivery capability. In addition to Tornado missions, the Germans are interested in an aircraft that could integrate networked manned and unmanned platforms, including controlled unmanned air vehicles.

The Luftwaffe reportedly favours adoption of the F-35 as a Tornado replacement.

Issues that have to be addressed include German industrial participation in the F-35 programme and the need for a high-level decision on whether to continue to invest in the nuclear mission.

Starting in 2018, F-35s will use the Raytheon 500lb GBU-49 munition, which uses the Paveway II Block 5 guidance system, to provide an interim all-weather capability against moving targets. The GBU-49 will be used by the F-35 pending availability of the Raytheon GBU-53 Small Diameter Bomb II in the 2020s once the F-35 Block 4 software is operational. The GBU-49 can be used with the forthcoming Block 3F software. Integration of the GBU- 49 on the F-35 was managed by the F-35 Joint Program Office in addition to other requirements and cost less than $100,000 to accomplish.

A new pilot helmet for the F-35, dubbed the Gen III Light Helmet, produced by Rockwell Collins is currently in pre-production. It is scheduled to enter production later this year and be operational in 2018. Along with modifications to the F-35 Martin Baker Mk16 ejection seat, Gen III will expand the envelope for safe ejection from the F-35. The helmet was ordered in 2016 after sled test ejections with the current helmet showed that some pilots weighing less than a given body weight would be vulnerable to injury in the event of ejection. 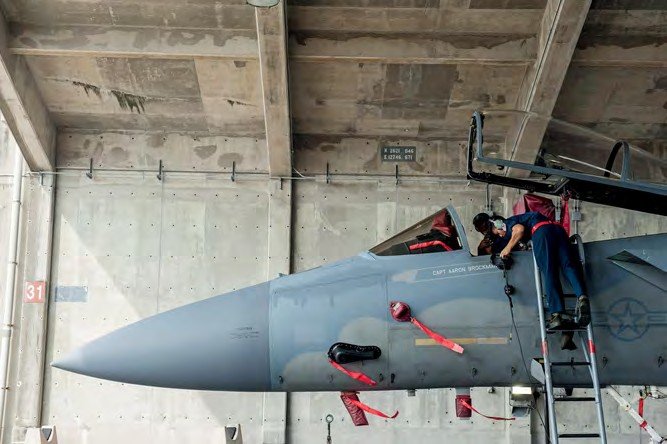 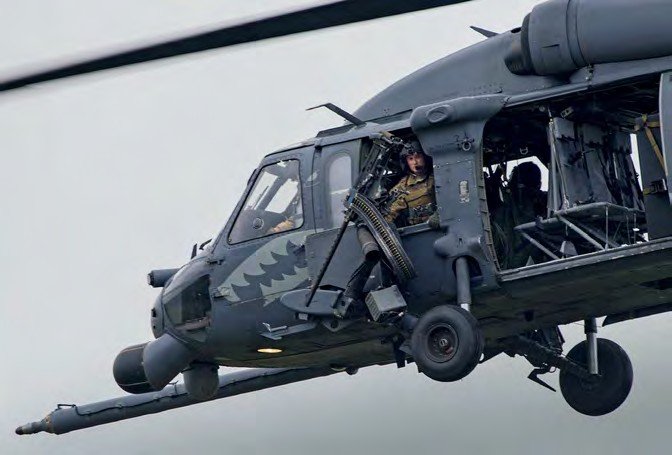 The Air Force has not yet submitted to Congress the report it directed in April 2016, setting out the costs associated with restarting production of the Lockheed Martin F-22 Raptor stealth fighter. Senior Air Force leadership, however, has little enthusiasm for spending on renewed F-22 production as F-35A Lightning II production is ramping up.

Lockheed Martin has proposed upgrades to the low-observable (LO) external coating of the F-22. This would supplement the recoating work carried out by the Air Force at the purpose built F-22 maintenance depot, part of the Ogden Air Logistics Complex at Hill Air Force Base, Utah. Issues with the LO coatings contributed to the decrease in the F-22’s mission capable rate from 73% in 2014 to 60% in 2016.

The Air Force announced on May 4 that live-fire testing of the F-22’s Increment 3.2B upgrade has been completed at Edwards Air Force Base, California. F-22s from the 411th Flight Test Squadron engaged multiple Kratos BQM-167 target drones with Raytheon AIM-9X Sidewinder and AIM-120D AMRAAM missiles.