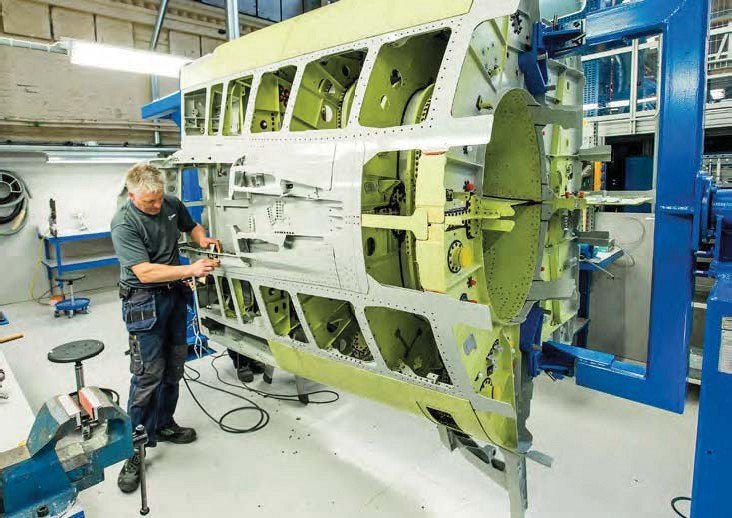 An aft fuselage subassembly in a jig on the production line at Linköping, one of seven subassemblies manufactured on site. 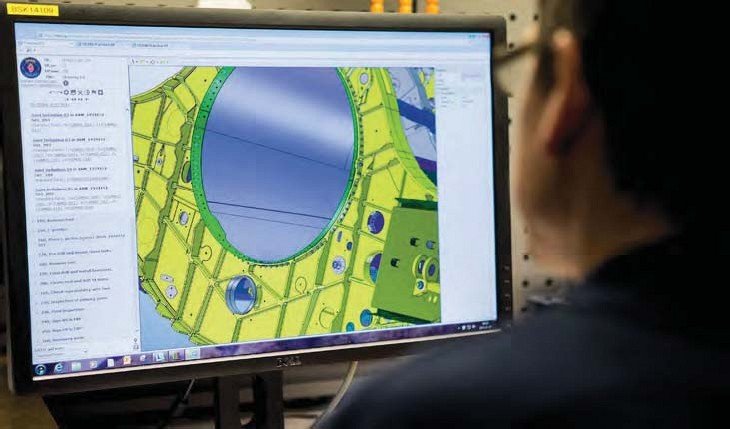 A production worker views an MBD system screen to visualise a fuselage bulkhead.

Pre-production activities include purchasing of long-lead items such as frames, engines and parts. Production activity starts with sheet metal production and machining of parts, followed by composites. Hands-on work to build a Gripen E starts with the assembly of major subassemblies; forward fuselage, the gun section, wing centre fuselage (which includes the wings), middle fuselage, aft fuselage, tail cone and fin, all of which are produced separately at Linköping. The wing centre fuselage includes the main landing gear unit and the wings. It is the most complex aircraft subassembly ever produced for the Gripen fighter. This huge part is also the largest machined component produced at Linköping measuring approximately 4.5m in length, and the most time-critical part required on the assembly line of the entire Gripen E production process.

Touring the Gripen E production line with Head of Production Matti Olsen, we started looking around the jig used to mate the aircraft’s structure. Discussing the start of the assembly process, Matti explained the process starts with setting up the wing centre fuselage in station one on a jig to which the rear fuselage, the gun unit and the forward fuselage are mated.

He said: “The rear fuselage, gun unit and forward fuselage are all assembled on fixed tools and mounted on rails. Station one actually comprises two bays located next to one another, one for the head station and one for the clean-up station; the latter is used to cut lead time. Up to this point we don’t install any component or harness inside the aircraft structure.

“To verify, each single part, each subassembly, each tool, the completed structure and the completed aircraft are all measured digitally against the design model. Saab operates a paperless system; the entire design model is digital and is the only interface used by production workers on the assembly line.”

During AIR International’s visit to the assembly line, one of the low-rate production Gripen E aircraft was in station two undergoing preparation for pressure testing of its integrated fuel bays; those are located throughout the centre fuselage section from wing tip to wing tip.

Station two is the final stop for riveting and pressure testing before the complete structure is moved to the final assembly line where component installation is performed. Saab’s production philosophy is first to produce the structure and then do the installation; structure assembly and installation are never mixed to avoid risk of a fault inside the aircraft.

Gripen Es 396003 and 396004 (the last of the low-rate production batch) were in the structures assembly bay at the time of the visit; both are destined for the Svenska Flygvapnet. Once full-rate production is established, Saab plans to run just the two lines, with additional capacity in Brazil. That said, some jigs are already running on four lines for the critical assemblies.

Discussing production, Matti Olsen pointed out that the people working in the structures assembly bay and in final assembly are responsible for the quality of the build of the aircraft. Regular inspections are undertaken by two quality control engineers; one in the structures assembly bay and one in final assembly, both working with the processes. Saab first introduced this quality assurance process in 1987, and continues to improve the process.

Everything on the structure but the wing skin is drilled by robot, in a production system to meet the technical requirements of Gripen E, created by a design team involving various stakeholders, including stress engineers, designers, maintenance engineers and operators.

Aircraft 39-8, the first, was built on the production line and not in a prototype workshop, traditionally the place where design problems were discovered. Building the very first aircraft on the production line was made possible because all design work was completed with the model based definition (MBD) process by an integrated design team. In the words of Matti Olsen: “A remarkable change from how it used to be, which enabled us to attack the traditional learning curve, very dramatically.” 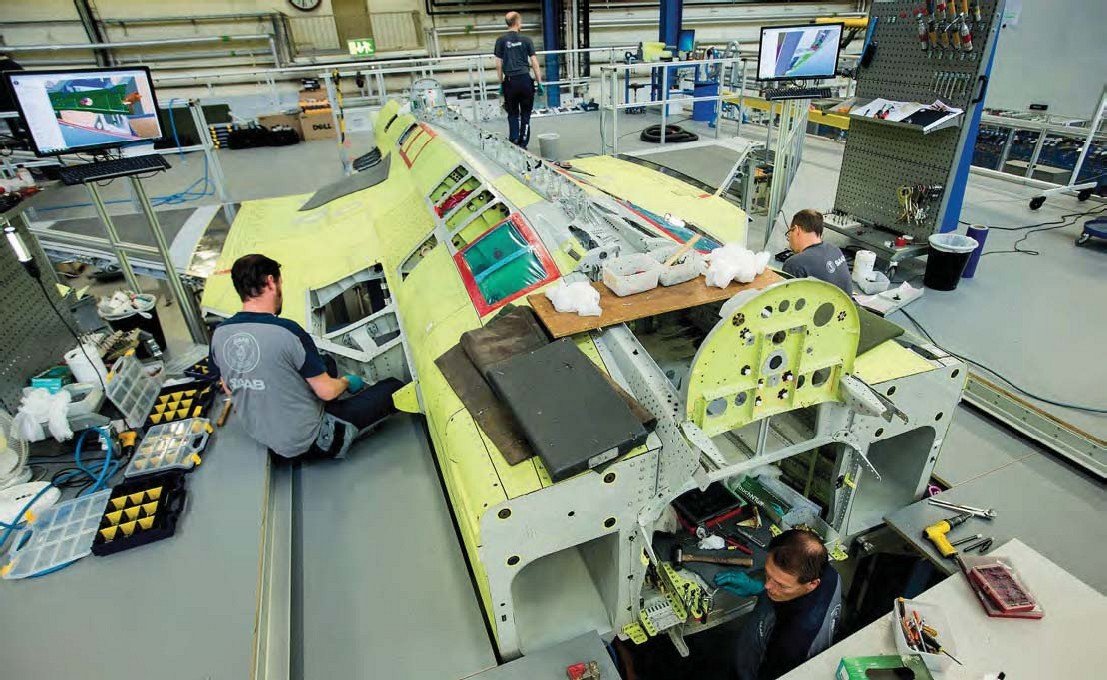 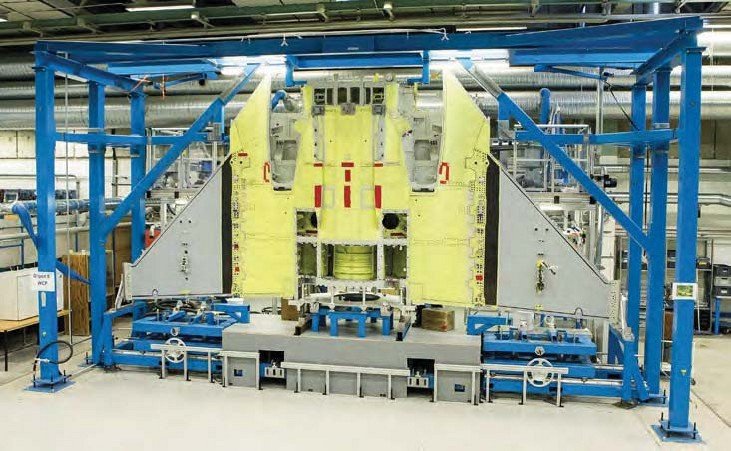 Once an aircraft is rolled from the structure assembly bay to final assembly its tail fin, stabilisers and internal components are fitted and installed.

Fixers used to mate subassemblies are not aligned across the aircraft in the traditional way, but positioned at optimum points between the two subassemblies, an articulation that provides strength and optimises weight and internal volume.

Soft joint technology also enables longer and therefore fewer wiring harnesses, unlike rigid joints that require a greater number of shorter harnesses, which can distort signals carried by the lines.

According to Matti Olsen: “That’s the big win with MBD. Once the part is designed, the part is in the model, all the requirements are in the model, and the model is created only once. That model is used by all stakeholders: production engineers, the end customer, the maintenance and downstream to suppliers. It’s our biggest revolution in production. Information served to the production workers is continuously updated. All components received on the final assembly line are accurately formed and produced ready to fit and connect, because all hardware on the aircraft and everything around the aircraft is 100% designed with MBD. Production workers learn how to assemble the aircraft before they actually see the hardware.”

Station one: installation of 36km (22 miles) of harnesses, wiring and cables, 300m (984ft) of piping, and major assemblies; the last of which is the main landing gear and nose wheel. The aircraft sits on its landing gear for the first time in station one, the means by which the aircraft is moved to the next station. This is the biggest station and the one in which the most number of man-production hours are spent. For those aircraft bound for the flight test programme, station one is where all flight test instrumentation is installed, including strain gauges.