Building work gets under way at DHAM 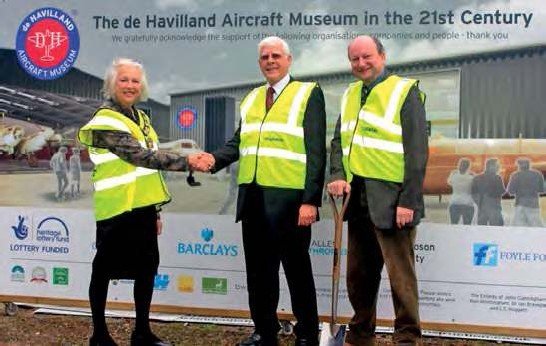 Aceremony was held at the de Havilland Aircraft Museum at Salisbury Hall on 28 November to mark the start of work on a new, £3.2-million hangar project. Hertsmere mayor Brenda Batten was welcomed to the event by museum chairman Alan Brackley, who said, “It has taken five years to get the new hangar project from initial planning to the start of construction.

The hangar is important because it will not only enable us to get more of our historic aircraft under cover and protected from the weather but also enable us to become much more involved in the local community”.

Brenda Batten added, “This is the oldest aviation museum in Britain and is unique. It is a valuable asset to the community and will offer many more facilities to both the community and educational establishments. Importantly, it will continue to ensure that the de Havilland heritage is further enshrined in the community where it employed many thousands of people and led the world in many aviation techniques.”

The new hangar, which was given the go-ahead following a £1.9-million grant from the Heritage Lottery Fund, is due to be completed by August 2019. Despite the ongoing building work, Alan Brackley stressed that the museum will continue to be open to visitors during the 2019 season, saying, “All of our museum will be accessible for visitors to get close to and into several of our military aircraft and civil airliners”. The museum is currently closed for the winter, and will reopen on 17 February