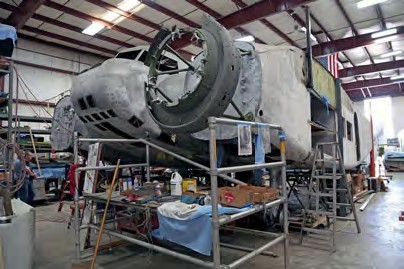 The fuselage of the sole Burnelli CBY-3 in the New England Air Museum workshops in mid-July.
STEFAN SCHMOLL

The Loadmaster in service in South America during the 1950s.

RESTORATION of the world’s only Burnelli CBY-3 Loadmaster is progressing well with a group of volunteers at the New England Air Museum, 53 years after the unorthodox ‘lifting body’ transport first arrived at the museum’s Windsor Locks site in Connecticut. Built by Canadian Car and Foundry in 1944 at Fort William, Québec, the machine, CF-BEL-X, was displayed outdoors from 1964 until being moved into the restoration workshop in 2013.

The team, led by restoration co-ordinator Bob Vozzola, has rid the huge, bridge-like fuselage structure of corrosion suffered during that protracted exposure to the elements. Work to fit out the interior is challenging, with many parts absent: the machine had 18 hatches and access doors internally, several of which are missing and being remanufactured. All the windows had been smashed and are being remade. The two Pratt & Whitney R-2600 engines and cowlings have been lost, but the museum has a pair of ’2600s from a B-25 that have been restored and are now in storage. The aircraft had suffered rear fuselage damage around the tailwheel, where structural and skin repairs have been carried out, and major structural repairs have been completed on the control surfaces.

The machine was the last aircraft penned by Vincent Burnelli, a Texan whose first ‘lifting body’ design, the RB-1 biplane freighter, flew in 1920. The CBY-3, which could accommodate 24 passengers, was intended for bush flying operations in northern Canada. Despite garnering great praise in the aviation press and within the industry, the prototype remained the sole example built. After being registered N17N it was to earn its living flying passengers and freight in Canada and South America, eventually finishing its career at Baltimore Airport, Maryland, where it ended up being dumped.