The LVG C.VI makes for a fine sight with its former lozenge finish exposed.
BEN DUNNELL 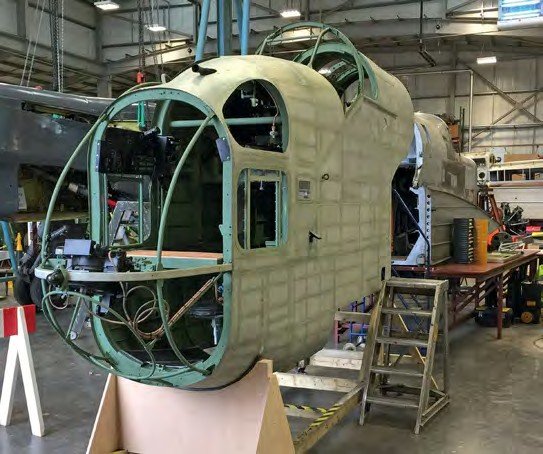 AS the Royal Air Force Museum gears up for 2018’s RAF centenary celebrations and proceeds with the major redevelopment of its London site at Hendon, so its Michael Beetham Conservation Centre (MBCC) at Cosford is itself engaged in an especially notable array of projects, not least with the Hendon transformation in mind.

In terms of its longer-term efforts, Hampden TBI P1344 remains a focus, and has now gained a nose section. This has been built new from original drawings, manufactured over a period of about 18 months by one of the MBCC’s technicians. The centre’s manager Darren Priday says, “Some of the items that are going inside — the seats, things like that — we’ve managed to either recover [from P1344] or recover from other Hampdens; some of them are generic items that would have been fitted to RAF aircraft at that time”. The tailplane group has been given new fabric and repainted, and the rear fuselage is close to being finished externally.

One of the outer wings of Wellington X MF628 has been fabric-covered and painted. The other (which can temporarily be seen in one of the museum’s display hangars, near the Gloster Gladiator that moved in recently from Hendon) has been fabriccovered and doped, and will be painted this summer. “On the fuselage”, reports Darren, “we’ve done a lot of work on the geodetic structure; there wasn’t a lot of corrosion. Now we need to get it about a foot in the air so we can get underneath and have a good look. A lot of the wooden fixtures and fittings in there, like the floorboards, have come out for just a light clean-up and a fresh coat of varnish so they look old, but good”. The MBCC team will start on the Bristol Hercules engines this year. Finishing the aircraft off is not expected to be too rapid a job, as recovering alone will take about six months. It will end up in T10 trainer configuration but in generic Bomber Command colours, with no squadron markings.

“There’s not too much more to do to the LVG, except from all the fabric work, and putting a fresh coating on the wood”

As for the ongoing conservation of Dornier Do 17Z-2 Werknummer 1160, the airframe’s large sections are covered by tarpaulins with dehumidifiers inside, drying it all out as much as possible. There is no present timescale for putting the aircraft on display; this will most probably depend on the results of the museum’s masterplan for the Cosford site.

Since it arrived from Hendon, Lysander III R9125 has been put into the MBCC volunteers’ workshop, as it will mainly be a volunteer project, and they have been conducting a complete photographic record of the airframe. According to Darren Priday, “There’s evidence on there of old paint schemes, so what we’re going to look at doing is having a few areas of maybe about 4in square where we can very, very carefully remove the paint layers and see what we can find underneath. It’s very similar to what the Fleet Air Arm Museum did with their Corsair. If there is original paint underneath we need to discuss whether we can cut back to that finish.”

On LVG C.VI 7198/18, Darren continues, “There’s not too much more to do, apart from all the fabric work, and putting a fresh coating on the wood. We’ve got to get an idea of what the Germans were using, and — if we can get that product — to apply that”. Equally, the museum needs to source the correct lozenge-pattern Irish linen. It is getting in touch with the custodians of the other surviving original C.VIs (the Musée Royal de l’Armée in Brussels and the Musée de l’Air at Le Bourget) to seek their assistance on these matters.

Definitely set to be part of the new displays at Hendon is Gnat T1 XR977, in Red Arrows colours. As reported previously, it will be exhibited in the museum’s new ‘introductory’ display on 100 years of the RAF. It will not be possible to suspend it from the roof, so the aircraft will be plinth-mounted. Before then the aeroplane needs to be stripped and preparatory work done. It is likely to head south in early 2018.

For details of the MBCC’s annual open week, which is usually held in November, keep an eye on the museum’s website: www.rafmuseum.org.uk/cosford.