Reconstruction of a Sopwith Camel replica originally built by instructors and boy entrant trainees at the RAF St Athan-based No 4 School of Technical Training for display at the 1962 Royal Tournament at Earl’s Court in London has been completed by a team of volunteers at the Montrose Air Station Heritage Centre in Angus, eastern Scotland.

Camel project leader Julian Stevenson says, “With funding from Museums Galleries Scotland (MGS), we embarked on the project in September 2017 with the intention of restoring the Camel, ‘B5577’, which had been on display for a number of years. We soon realised the aircraft was not built to represent an accurate reproduction of an original Camel and the team decided a complete reconstruction was necessary to bring the aircraft up to museum standards. 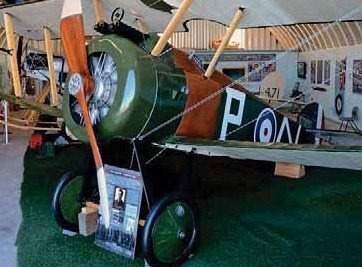 “What we have now is a dimensionally accurate fullscale replica which has been painted and fitted out with replica twin Vickers machine guns representative of Camel B7320 of No 70 Squadron, RFC flown by World War One ace Capt John Todd MBE MC DFC, who became a pilot instructor at the Montrose Air Station in late 1918. Capt Todd retired after WW1 and died in 1980 aged 81, and is buried in St Cyrus near Montrose”. Todd’s final total was 10 enemy aircraft destroyed — two of those being shared — plus seven driven down out of control and one captured.