Viking Air Limited is enhancing the CL-415 and development of its aerial firefighter might not stop there. Mark Broadbent reports

In June 2016, Viking Aircraft of British Colombia, Canada announced a major development: the acquisition of the type certificates and manufacturing rights for all variants of Bombardier’s amphibious aircraft.

The acquisition, following Bombardier’s strategic decision to focus on airliners and business jets, meant Viking assumed responsibility for all product support, parts and maintenance activities for the worldwide fleet of Bombardier aerial firefighters and multi-purpose aircraft – CL-415s, CL-415MPs and variants and its CL-215 piston-engine and CL-215T turboprop predecessors – from a newly acquired, specially repurposed 50,000ft2 (4,645m2) facility in Calgary, Alberta.

Nearly two years later, in May 2018, Viking announced the next step in its management of the amphibious aircraft range: the launch of the CL-415 Enhanced Aerial Firefighter (CL-415EAF) conversion programme through sister company Longview Aviation Asset Management (LAAM), involving a major upgrade and conversion to specially-selected legacy CL-215 aerial firefighters.

The CL-415EAF is significant not just because it will introduce new features to a legacy product, but also because it is a bridge to a potential new-production aerial firefighter, the Viking CL-515.

The CL-215T, a turbine retrofit introducing Pratt & Whitney Canada PW123AF turboprops to replace the Wasps was launched in 1987 (first flight 1989, initial delivery 1991), with two CL-215s converted to act as development and demonstrator aircraft. However, a decision was made not to continue with retrofit kits for this aircraft as the market was favouring newbuilds. The new CL-415 was launched in 1991, with the aircraft flying in December 1993 and first delivery in November 1994.

According to Rob Mauracher, Viking Executive Vice-President, Sales and Marketing and Chief Operating Officer at LAAM, there are now 160 CL-215/CL-215T/ CL-415-family aerial firefighters in service worldwide. They are operational with either air forces or parapublic organisations in Canada, Croatia, France, Greece, Italy, Malaysia, Morocco, Portugal, Spain, Thailand, Turkey and the United States.

He said: “This is a very robust platform. It’s able to operate into high sea states and is built for severe operating environments. Unlike a lot of aircraft, the CL family do not have life limits on the airframe. They are the only aerial firefighters in the world with full OEM [original equipment manufacturer] support, designed specifically for aerial firefighting and working in an amphibious environment.”

The CL-415EAF is the next evolution of Canada’s aerial firefighter. The programme is a collaboration between Viking and its sister company LAAM, a Calgary-based organisation established in 2016 to provide financing, lease options and trade-in capabilities for aircraft supported and manufactured by Viking.

The CL-415EAF will introduce several airframe and systems improvements. Electrical, fuel, hydraulic and flight control systems will be upgraded, and customers will be able to pick from options that include an external engine wash system, an enlarged cargo door and a ground auxiliary power unit to run the aircraft’s electrical systems and charge the batteries for engine starting. 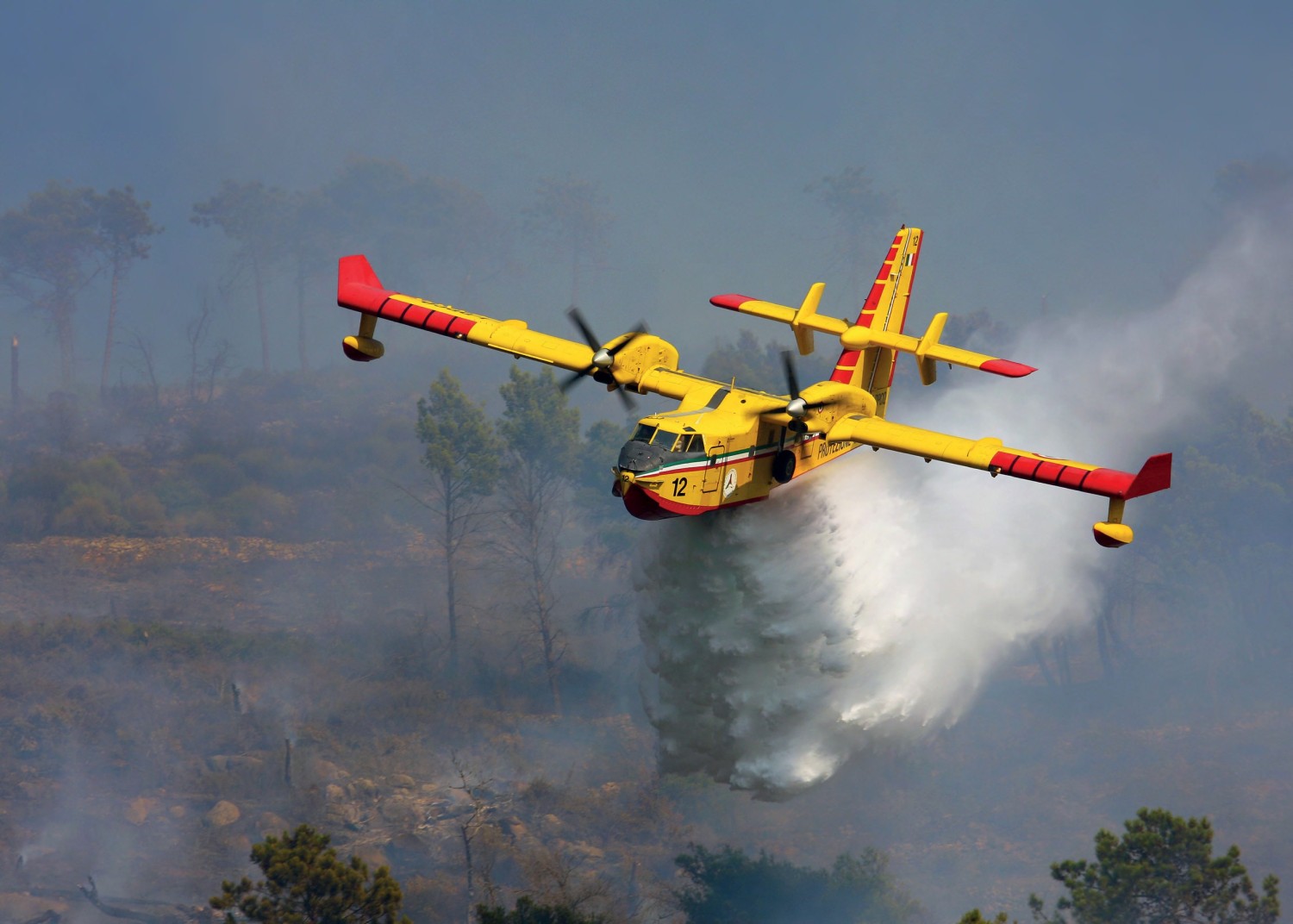 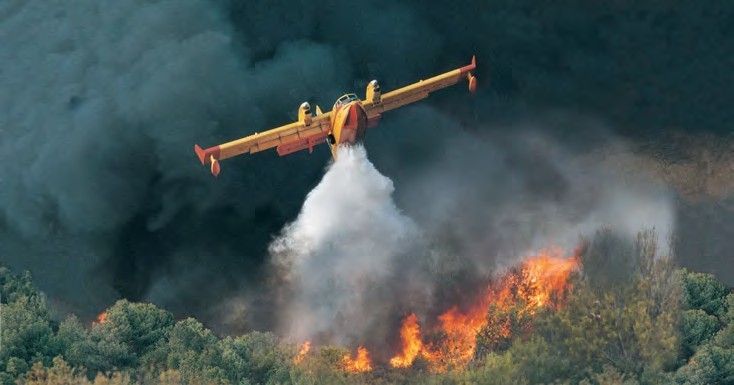 The CL-415 Enhanced Aerial Firefighter will have a 1,550-1,600 US gallon tank. The aircraft is intended to lead the way to a potential new firefighter, the CL-515.

The upgrade aims to confront issues caused by ageing parts in older airframes and improve maintainability. Mauracher explained: “With all the worldwide obsolescence we’re seeing today, we want to make sure the in-service operators aren’t concerned about operational deficiencies.”

This approach is in line with Viking’s primary activity of providing product support for the legacy de Havilland Canada and now Canadair commercial aircraft. Mauracher explained: “We do all the modifications relevant to the aircraft in airworthiness, engineering support, field services reps, spares, customisations, repair; everything you think of as a normal OEM like Airbus, Boeing, Bombardier, the same [goes] for Viking. The only difference is that product support is our primary business.”

Another key part of tackling obsolescence is ensuring avionics are modernised to improve functionality and comply with existing and upcoming regulatory requirements. On the CL-415EAF there will be several new standard flight deck features: GPS, a traffic collision and avoidance system, a terrain awareness warning system, automatic dependent surveillance-broadcast out, a flight management system (FMS) and flight director. Final supplier selection to provide the avionics is currently underway.

Mauracher added: “We’ll also be enhancing water and fire retardant-carrying and dropping capabilities.” The CL-415EAF will have an increased capacity between 1,500- 1,600 US gallons (5,678-6,056 litres) capacity, the capability to drop foam-injected water retardant and the ability to scoop a complete tank-load from any suitable water source in just 12 seconds. Viking says the aircraft will be able to drop in excess of 125,000 litres (33,021 US gallons) per hour.

Like the CL-215 and CL-415, the CL-415EAF will feature winglets and finlets. It will also receive component improvements, corrosion protection enhancements and a flight deck air conditioning system.

Eleven CL-215s owned by LAAM have been earmarked to enter the CL-415EAF conversion programme. The first converted aircraft is expected to be completed in 2020.

Mauracher said: “What we’re doing now is putting together the team and reactivating the supply chain to get the people in place to do the conversions. LAAM will be doing the physical conversions of the aircraft, Viking will be supplying the kits and the parts and maintaining all the support required for airworthiness – product support [and] technical support in the field.”

To initiate the programme, LAAM will hire up to 150 technical and support Staffmembers for its Calgary facilities and Viking will recruit another 50 Stafffor its Victoria facilities to support development of the conversion kits. Viking will also reinstate its Viking Academy programme to provide the specialist technical training required for these positions.

Both LAAM and Viking are also working with local institutions, including the Southern Alberta Institute of Technology, and Viking is actively developing partnerships with companies participating in the British Columbia Technology Super Cluster initiative.

During its time managing the CL-415 programme, Bombardier developed a maritime patrol version of the aircraft, the CL-415MP. Two examples of this variant serve with the Malaysian Maritime Enforcement Agency undertaking surveillance and SAR missions, with the aircraft equipped with a side-looking airborne radar, radio direction finder, an electro-optical/infrared sensor, an automatic identification system, digital data and video recording and a high-speed satellite data link.

An artist’s impression of the newly launched CL-415 Enhanced Aerial Firefighter, which will introduce several structural and systems improvements to the 11 aircraft earmarked for conversion.

Mauracher feels this type of flexibility is a potential area for future business for Viking now it is managing the CL-415. He said: “We’re finding operators don’t just want to use an asset for firefighting, but for other jobs during the year or during the [fire] season when they’re not required. That’s where the avionics suite becomes important; those things change the dynamic of the aircraft.”

To this end, the CL-415EAF is being pitched as an aircraft that can also carry specialist role equipment and therefore be re-tasked for other special missions. For example, the aircraft will have a large cargo door for transport missions and a stretcher rack for emergency medical services, and the ability to carry a spray boom system for insect and oil pollution control work.

Mauracher said the intention is to open the CL-415EAF to new markets. Using new components to reduce maintenance and training costs is important in this regard. Adding improvements to an established platform is meant to appeal to operators in secondary markets that can’t afford an allnew next-generation aircraft and the costs associated with it.

Like Viking’s other amphibious aircraft, the CL-415EAF will be supported by the company’s Maintenance Plus programme, which supplies operators with components at a fixed monthly/yearly fee plus a fixed rate per flight hour. The objectives are to provide customers with a good availability rate from the very start of operations, guarantee spares availability, provide better maintenance planning and predictable cost of spares, and eliminate annual fluctuations in the level of maintenance expenditure.

Viking says Maintenance Plus provides reduced aircraft operating costs, assurances for operators over the cost of parts consumption, advance awareness of parts maintenance, increased buying power by consolidating operators’ parts forecasts to obtain the best possible prices, and a unique maintenance plan compiled from the collective knowledge of all customers.

Towards a new firefighter

Mauracher said: “The CL-415EAF is a bridge to new production. The CL-415 airframe will be the basis, but we will make significant enhancements. We’ll be incorporating solutions for obsolescence issues. We’ll introduce the new avionics, increased weights, a revised maintenance programme, and optional feature improvements including de-ice systems, additional seating, increased fuel capacity, etc.”

It is important to note Viking hasn’t yet made a final decision about developing a CL-515, but Mauracher said the company is “putting together the funding package”. Viking has applied for support from Innovation, Science and Economic Development Canada, a federal institution that leads 17 departments and manages a Strategic Innovation Fund.

Mauracher said: “If we get the ‘go’ decision from our board, we’ll make a launch decision sometime in the fourth quarter of this year. If you look at a normal production ramp-up I would say realistically we’d likely be looking at delivering our first aircraft in 2023.”

If Viking does launch the CL-515, the programme would mirror what the company has done with the Twin Otter. Viking acquired the type certificate for the small utility turboprop in 2006 and the following year launched the Twin Otter Series 400, a new production standard for the aircraft. Mauracher said: “If you look at the Twin Otter, there are around 800 changes from the Series 300 to the Series 400. The same kind of thing is going to happen [on the firefighter].”

Viking believes there is big potential for the CL-515. Mauracher said: “We’re not just going to be doing one or two aircraft, we’re looking to build a ten-year run of low build rates of approximately four or five aircraft a year. It depends on what’s required by our customers, [but] we’re not looking to just build five aircraft and stop the line again.”

He said: “Every other aerial firefighter is a modification through supplemental type certificates. This is the only aircraft specifically designed for the aerial firefighter job. It’s robust, it’s very efficient, it’s a workhorse.”