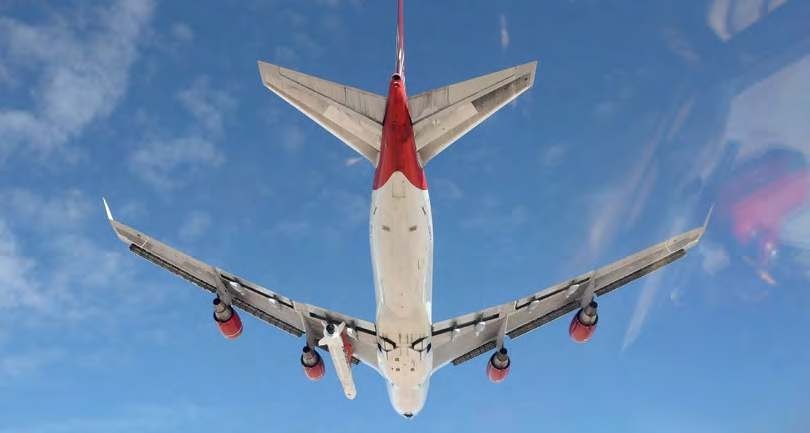 Virgin Orbit lew its LauncherOne rocket on its Boeing 747-400 carrier aircraft for the first time in November, as the company continues to prepare for launching satellites into orbit from the Jumbo.

An 80-minute ‘captive carry’ light from Victorville in California, close to Virgin Orbit’s Long Beach base and its future operational hub at Mojave Air and Space Port, followed LauncherOne’s mating with its carrier aircraft, N744VG Cosmic Girl (c/n 32745). Cosmic Girl is a highly customised former Virgin Atlantic 747-400 (ex-GVWOW) from which LauncherOne vehicles will be dropped from high altitude before a two-stage rocket engine ires the craft into low- Earth orbit where it will release satellite payloads.

The captive carry light assessed the take-of, landing and lowspeed handling and performance of the integrated 747/LauncherOne system, and Virgin Orbit chief pilot Kelly Latimer said: “Everyone on the light crew and all of our colleagues on the ground were extremely happy with the data we saw from the instruments on board the aircraft, in the pylon and on the rocket itself. From my perspective in the cockpit, the vehicles handled incredibly well and perfectly matched what we’ve trained for in the simulators.”

The light marked the start of a new phase in Virgin Orbit’s light-testing campaign that will involve Cosmic Girl lying both with and without a LauncherOne rocket attached to prove the 747 as a launch platform and the performance of the avionics and light computers on board the rocket. These trials will conclude with a drop test, during which a LauncherOne will be released from Cosmic Girl without igniting its engine.

Virgin Orbit says its first launch, what it calls a ‘space shot’, will “be completed in early 2019”, with the company planning to conduct “multiple trips to orbit in the year ahead”. The company said assembly, testing and integration of the LauncherOne rockets to be carried on the 747 is underway at Long Beach.