I’m not given to becoming too effusive in my reviews but the superb rendition of this latest aircraft from Carenado is a beautiful thing. From the polished tips of its propellers’ spinners to the freewheeling bogey at the rear of the fuselage, it just oozes quality. Of course, beauty is in the eye of the beholder and I will concede that the D18S is a lump of an aircraft, but who’s to say that big cannot be beautiful? 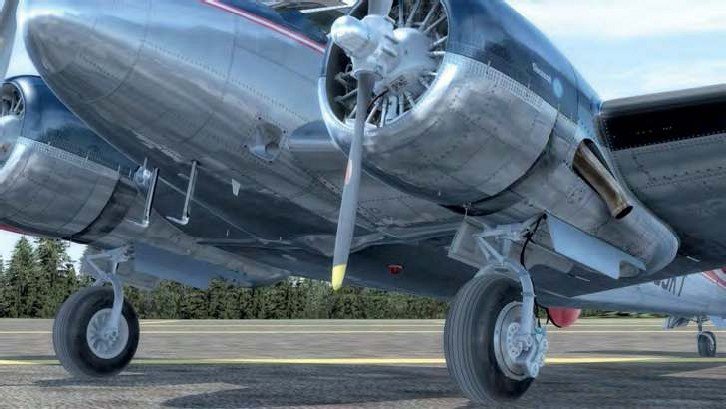 Climb under the fuselage to see the super detailing.

So here it is, the Beechcraft D18S; an aircraft designed in the 1930s to fulfil the company’s need for a civilian executive twin that would be suitable for both passenger and cargo use.

The remit also considered the possibility of later conversion to military use. The D18 is a twin-engined, low-wing monoplane, of allmetal construction that was originally fitted with two 350hp (260kW) Wright R-760Es radial engines. However, these were replaced in later models for the more reliable Pratt & Whitney R-985 Wasp Junior engines.