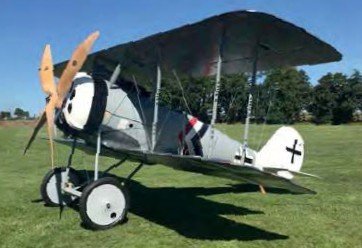 The latest exquisite creation from aircraft constructor and display pilot Mikael Carlson was rolled out of his workshop in western Sweden in mid-August, in the shape of a Pfalz D.VIII reproduction. Mikael says, „This project started five years ago when I got full access to the remains of the only remaining Pfalz D.VIII in the world. The Berlin Technical Museum [Deutsches Technikmuseum Berlin] gave me full access to measure all the parts they have, and with a lot more digging I acquired all the information to make this project possible.

„It is a 100 per cent correct reproduction using an original rotary Siemens-Halske SH III engine. I believe that this type of engine has not run since 1925, when Finland made a prototype aircraft, the IVL C.VI.25, with the SH III. I have to test-run the engine and I hope to fly it in early spring 2019. I hope that I will be able to do comparison flights between my Fokker DrI, Fokker D.VII and the Pfalz D.VIII next summer.”

Although only about 40 examples of the Pfalz D.VIII were built during 1918, they did see service with Jasta 2 (Jasta Boelcke). Mikael has finished his aircraft in the markings of Leutnant Paul Bäumer, of Jasta Boelcke, who finished the war with a total of 43 victories.