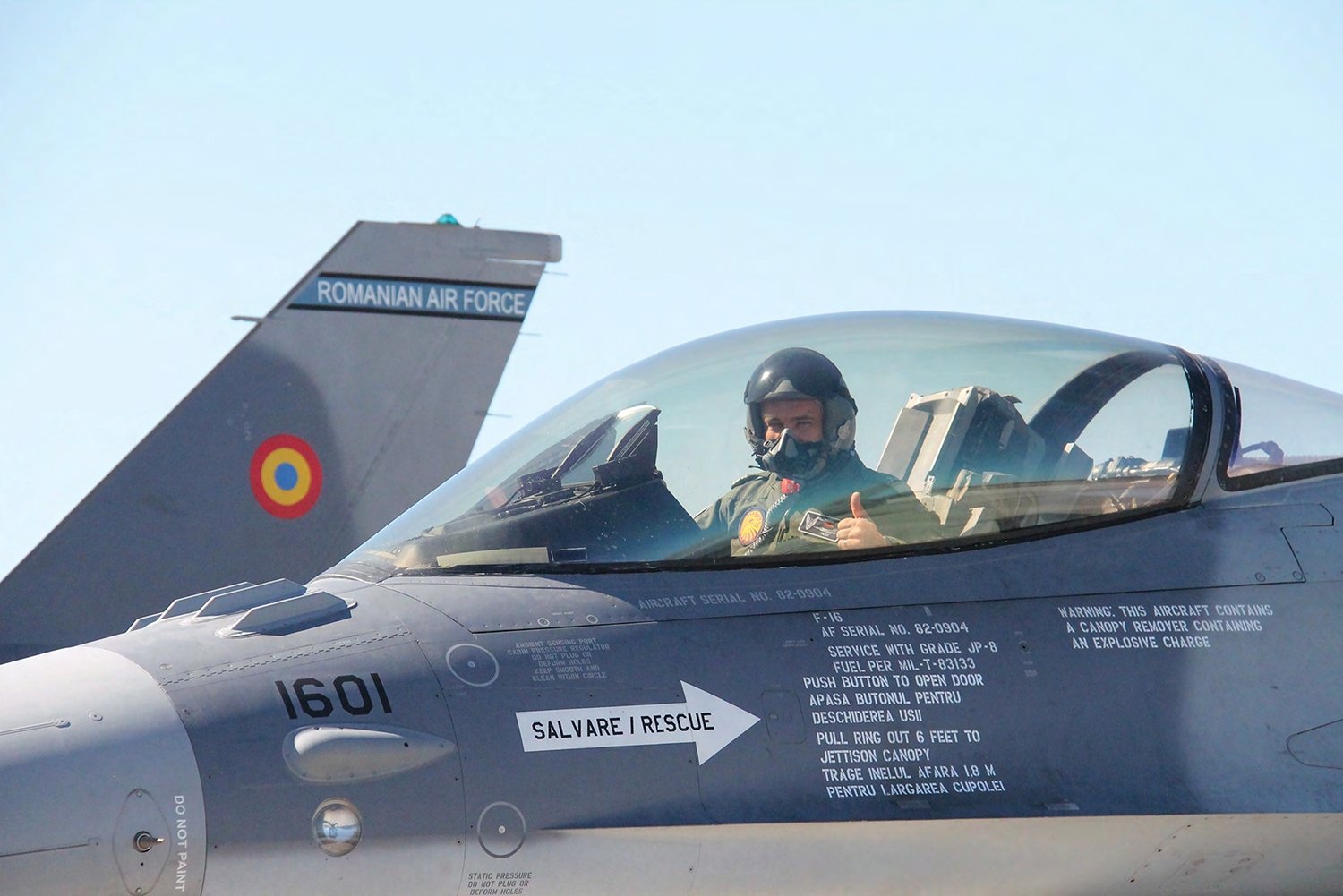 The first six F-16s arrived in Romania with only nine pilots trained on the type in Portugal. More pilots will be converted to the type locally using a mix of FAR and Força Aérea Portuguesa instructors.
Eugen Mihai/Romanian Ministry of Defence 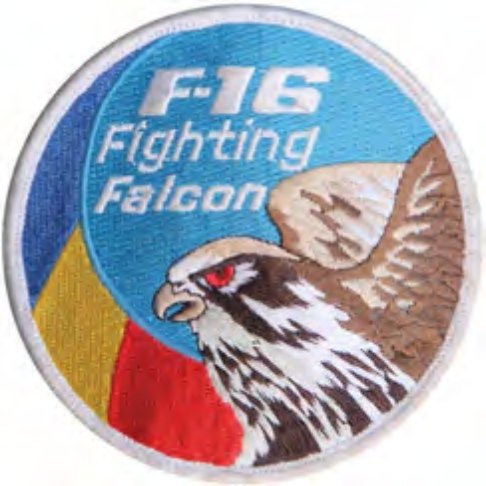 The Forţele Aeriene Române (FAR, Romanian Air Force) is the latest member of the F-16 operator club. Three years after signing a purchase agreement, the first Vipers landed in Romania on September 29, 2016.

Six F-16MLUs, complete with Romanian national insignia and serials, were formally handed over by the Força Aérea Portuguesa (FAP, Portuguese Air Force) at Base Aérea 5, Monte Real the previous day. Before that, the six aircraft, wearing a distinctive Carpathian ghost camouflage scheme featuring three shades of grey, flew training missions with Romanian pilots in the cockpit, but had no serials or national insignia applied.

An official ceremony, to mark the commissioning of the first six Romanian F-16s purchased under the Peace Carpathian programme and approved by the US Government, was held on October 7. This was a high-key event attended by Romania’s Prime Minister Dacian Ciolos, Defence Minister Mihnea Motoc, and Portuguese Defence Minister Jose Alberto de Azeredo Lopes.

Held at Baza 86 Aeriana (86th Air Base) Borcea-Feteşti, the ceremony marked the culmination of an effort by the Romanian Government to acquire new fighter aircraft. After deliberation, the government eventually decided to opt for a no-bid process at the beginning of the decade, in an attempt to put a new NATO-standard fighter type into service in a straightforward way to replace Romania’s ageing fleet of MiG-21 LanceRs.

Romania’s decision to purchase the F-16 dates back to March 2010. At the time, the plan called for 24 second-hand Block 25 F-16s sourced from surplus US Air Force stocks with a large logistics package, all for a cool $1.3 billion. However, in August that year the Romanian Government reportedly failed to pay the advance payment and thus walked away from the deal. Two years later, a new procurement plan called for the purchase of second-hand F-16MLUs sourced from a European nation. From the outset, Portugal and the Netherlands were regarded as the most likely sources, while Greece also offered Block 30 F-16s. Portugal’s offer was eventually selected as the best deal; the budget-constrained Iberian nation was seeking to dispose of nine F-16s.

A letter of intent was sent in September 2012 and Romania entered into a headto- head competition with Bulgaria to buy Portugal’s surplus F-16s. In February 2013, Bulgaria quit the race due to the resignation of the government leaving Romania as the only bidder for the well-maintained aircraft. 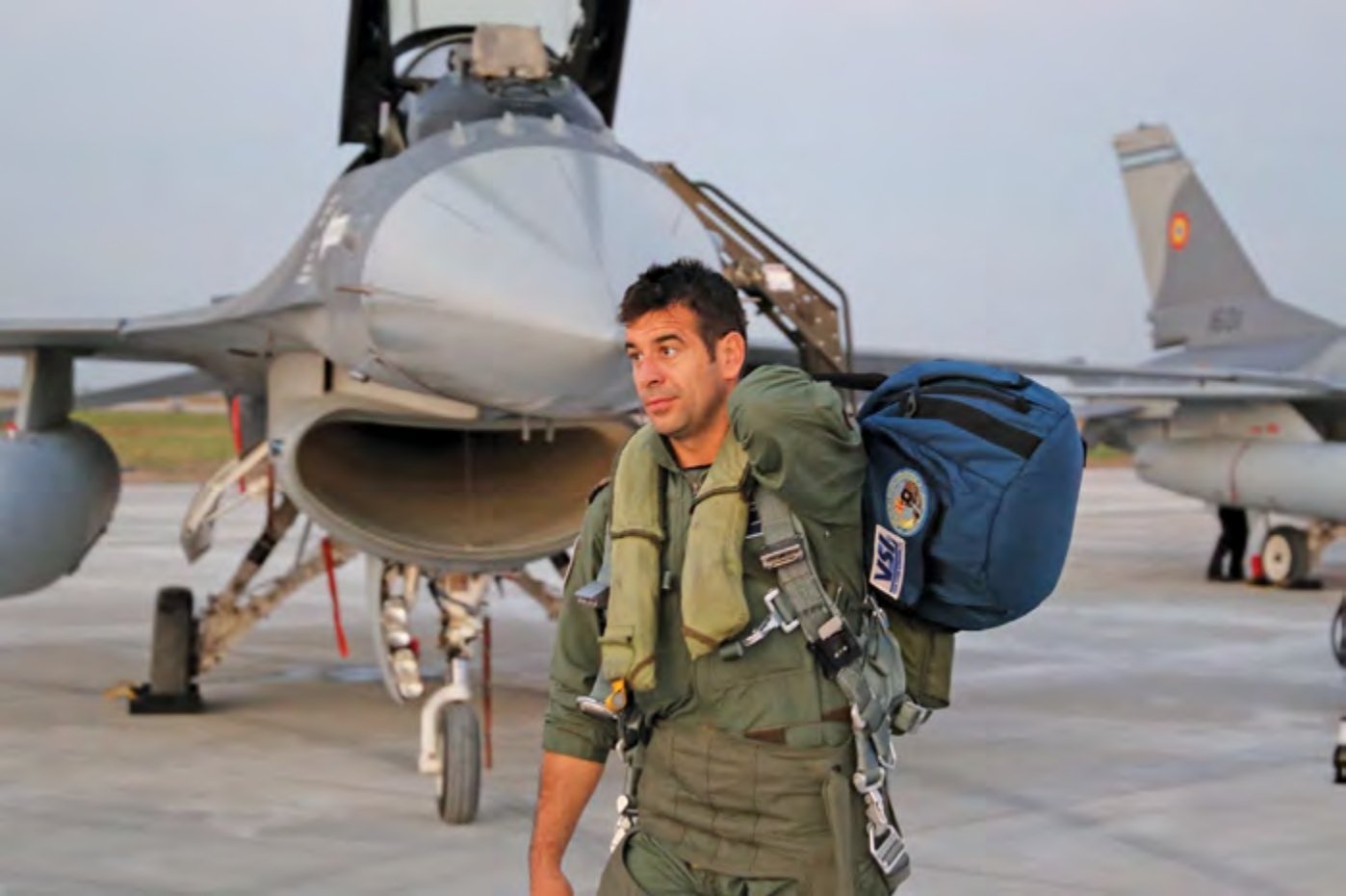 The six-strong F-16 formation passes overhead Borcea-Feteşti at the end of the delivery flight from Portugal.
Petrică Mihalache/Romanian Ministry of Defence

The 88 personnel comprised nine pilots, 69 technicians and ten other officers (and among them were four mission planers). Nine F-16s were former Portuguese aircraft (seven single-seat F-16As and two two-seat F-16Bs), and the remaining three were former US Air Force examples (one single-seat F-16A and two two-seat F-16Bs) sourced from long-term storage at the 309th Aerospace Maintenance And Regeneration Group at Davis Mountain Air Force Base, Arizona.

All 12 jets were set for configuration to Operational Flight Program (OFP) M5.2R standard, with support provided by Lockheed Martin. The configuration standard is noteworthy because M5.2R is not the latest MLU OFP and does not support the latest weapons certified for the F-16, such as the AIM-9X Sidewinder and AIM-120D air-to-air missiles, and the GPS/INS-guided weapons such as the Joint Direct Attack Munition, AGM-158 Joint Air-to-Surface Standoff Missile and the GBU-39 Small Diameter Bomb, and the updated Link 16 datalink.

The decision to retain M5.2R rather than the latest M6.5 OFP is seen as a pragmatic one; Romania cannot afford expensive new-generation weapons, so there was no compelling reason to spend a lot of money for the new mission-standard software.

The batch of FAR F-16s taken on strength in September were all built to Block 15 configuration between July 1983 and April 1984 and originally operated by the US Air Force.

All six aircraft were withdrawn from US Air National Guard service and placed in a long-term storage until delivery to Portugal in 1999. Consequently, the FAR has become their third operator. The Romanian aircraft are among the oldest F-16s flying in the world, but still have a service life of 4,000 to 4,500 flight hours remaining, which is deemed sufficient for another 20 years of operation.

In a separate contract Lockheed Martin will supply an undisclosed number of AAQ- 33 Sniper targeting pods, with a unit price of about $1.5 million.

In addition, €32 million (including €20 million granted by NATO) was invested in the refurbishment and modernisation of facilities at Borcea-Feteşti Air Base, including a runway extension from 8,200ft (2,500m) to 9,180ft (2,800m), installation of an arrestor cable system, construction of new hangars and improvements to the infrastructure needed to make the base good for F-16 operations.

As of October, the FAR had six F-16s and six qualified pilots, each with 200 flight hours accumulated during training in Portugal. In April 2017, three more pilots will complete their typerating course. To meet its initial combat-ready status the FAR F-16 force will be required to maintain quick reaction alert duty for the air policing mission. This is expected to be achieved in the fourth quarter of 2017, followed by full combat-ready status by 2019. 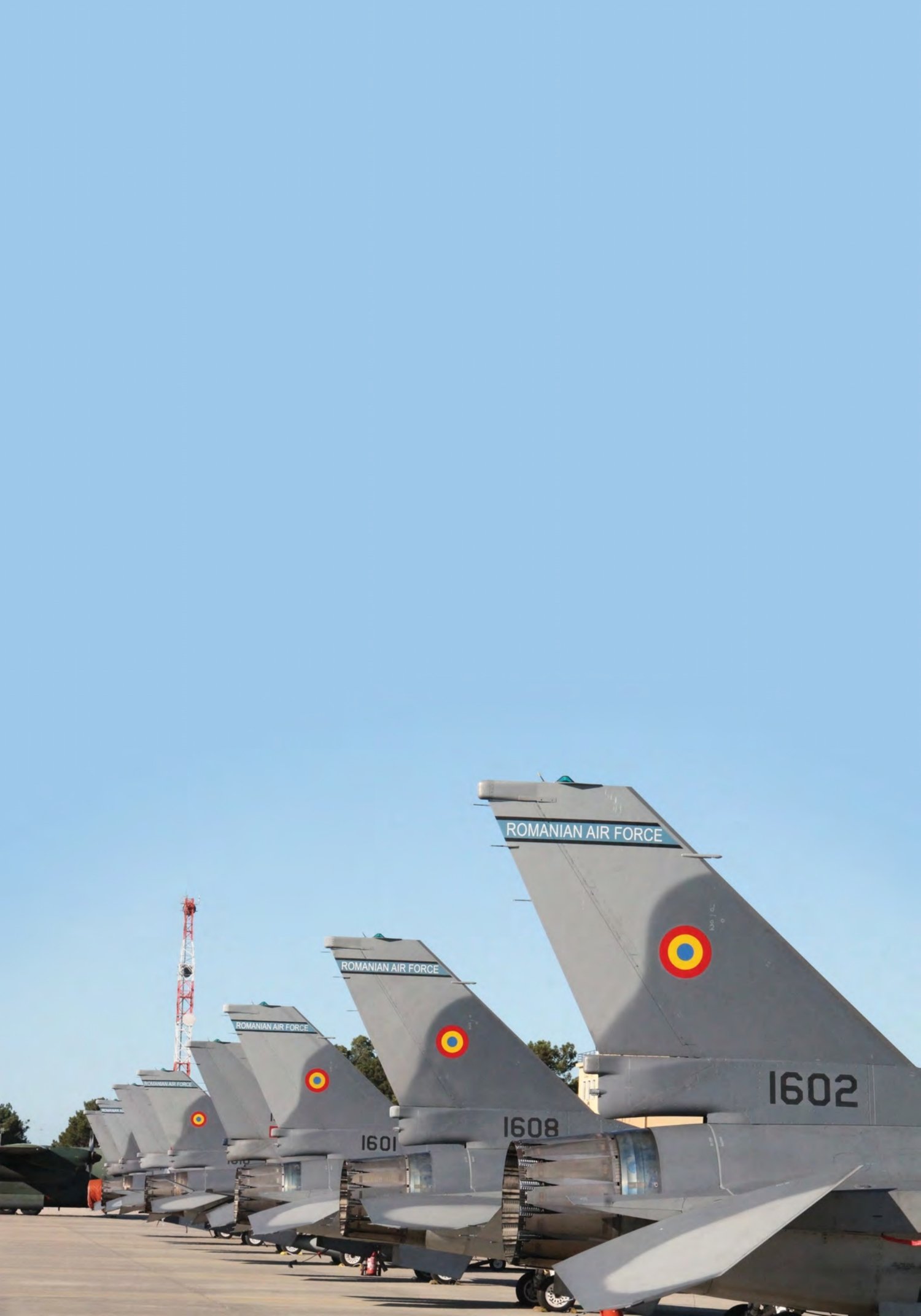 A Romanian F-16 pilot after the ferry flight from Monte Real Air Base in Portugal to Borcea-Feteşti.
Petrică Mihalache/Romanian Ministry of Defence 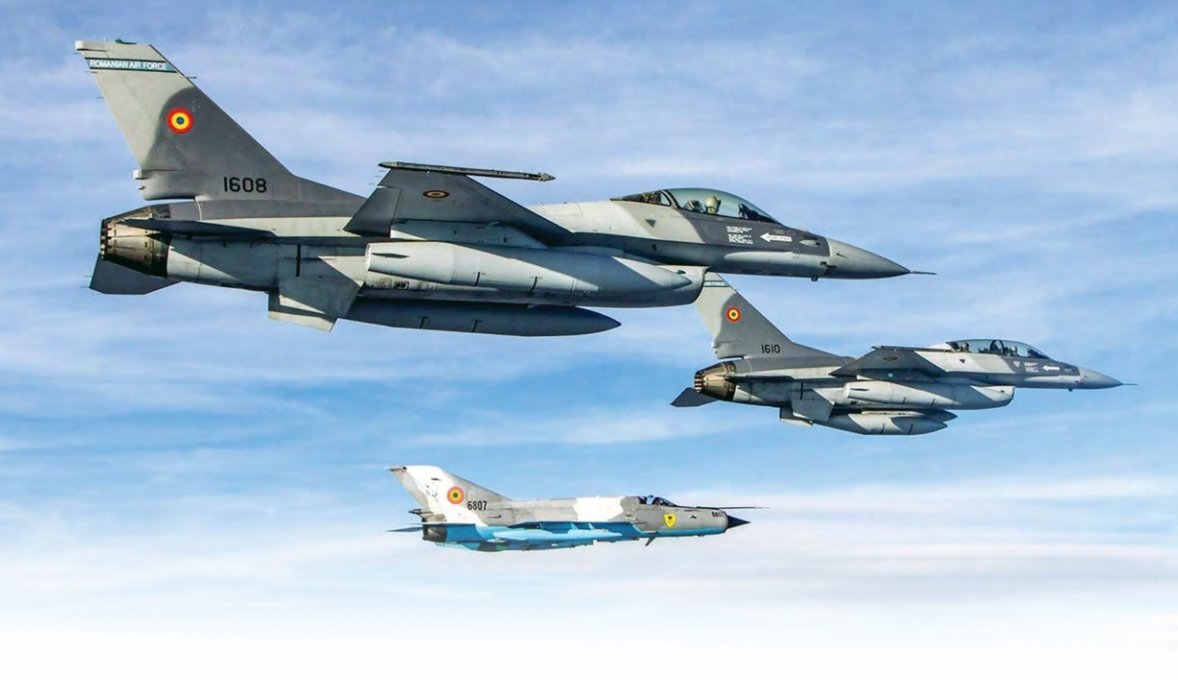 Dates for the milestones listed are tentative, because it remains unclear how F-16 operations will develop in the near-tomid- term. One of the biggest issues faced by the FAR is the small number of trained maintenance technicians and engineers. In a bid to improve the situation, an additional agreement was signed with Portugal for a two-year secondment of pilots, engineers, programmers and technicians who will be tasked with assisting with the F-16’s entryinto- service process.

To date there have been no announcements about how Romania intends to increase its stock of precision-guided weapons (especially air-to-surface munitions) or when it will gain a reconnaissance capability. Decisions depend on funding from the Romanian Ministry of Defence in the mid to long term. Currently, the highest priority is to master the air-to-air mission, so the F-16 force can replace the LanceR C in the Black Sea QRA role and provide the FAR with greater range and endurance.

Romania’s commitment to the F-16 is set to continue in the long term, with followon purchases of either second-hand or new aircraft. The FAR re-equipment plans call for a fleet of three multi-role fighter squadrons, each with 12 aircraft. That force is set to replace the current fleet of about 20 operational LanceRs currently assigned to two operational squadrons, one at Baza 86 Aeriana at Borcea-Feteşti and one at Baza 71 Aeriana at Câmpia Turzii. Due to the limited number of F-16s in the fleet and the protracted process to gain initial operating capability, the last LanceRs are expected to remain in service until 2020.

In 2015, Romania launched a search for another dozen second-hand F-16s, from European operators and the United States.

During the October 7 ceremony, Romanian Defence Minister Mihnea Motoc hinted that talks on the possibility of purchasing more F-16s have been held with Greece, Poland and the United States.

Among the biggest challenges for the FAR is standardisation of its future F-16 fleet to a common configuration. The United States is able to supply Block 15 F-16A and F-16Bs for subsequent upgrade to the MLU standard, but can also offer second-hand F-16C and F-16Ds. Greece is trying to sell its oldest Block 30 F-16s, though it is not known what Poland can offer, as the Polish Air Force operates ten-year old Block 52+ F-16Cs and F-16Ds. 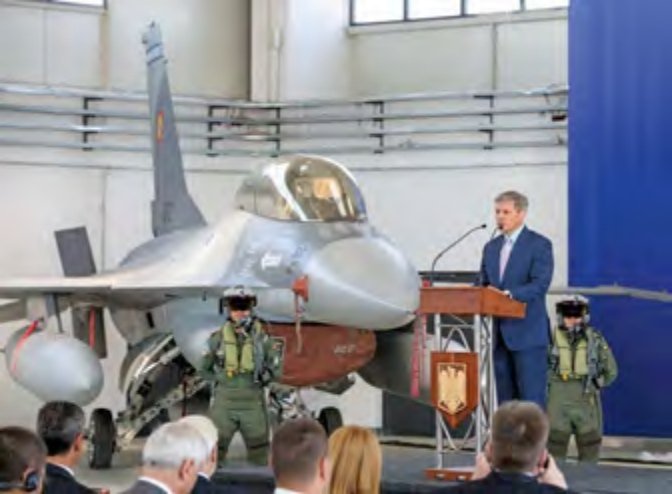 All six FAR F-16s ready to depart Monte Real Air Base on September 29 for Borcea-Feteşti in south-east Romania. Eugen Mihai/Romanian Ministry of Defence

It’s logical to expect the second batch of F-16s to be cycled through upgrade in Portugal, where the state-owned company OGMA (Indústria Aeronáutica de Portugal SA) is geared to perform an MLU upgrade, refurbishment and all needed life extensions at affordable prices. Consequently, the most likely plan involves surplus US Air Force F-16s being upgraded in Portugal, while the logistics support and weapons package will be purchased under a foreign military sales contract with the United States Government.

Romania’s process for acquiring more F-16s will also depend on entry into service of the first batch. Among the challenges likely to be experienced by the FAR will be funding the higher maintenance costs of the F-16 compared to the simple and dependable LanceR. Direct operating costs of the Romanian F-16 fleet are expected to increase in the coming decade, when Romania may be the only remaining F-16 MLU operator in Europe.

Lockheed Martin representatives confirmed to AIR International that the company has held talks with Romania about the possibility for delivery of new-build F-16Vs. However, the Balkan country has a limited window of opportunity, because the F-16 production line at Air Force Plant 4, the production facility run by Lockheed Martin, is set to close down in 2018 unless new export customers emerge in the foreseeable future to extend its life.

Romania’s Defence Minister Mihnea Motoc has already announced that the eventual aim of the country is to purchase the Lockheed Martin F-35A Lightning II, which will replace the F-16 in about 20 years. It remains to be seen if Motoc’s long-term plans are realistic. For the time being, one thing is sure: Romania has already achieved its long-time political aspiration to get the F-16. This procurement can be also seen as a good will gesture of the local political elite to show its loyalty to the United States, after allowing deployment of the US ballistic missile shield at Deveselu Air Base.

For now, the new F-16 fleet must work up to a level of capability that allows it to conduct a range of missions, a process that could prove a time-consuming and expensive challenge.