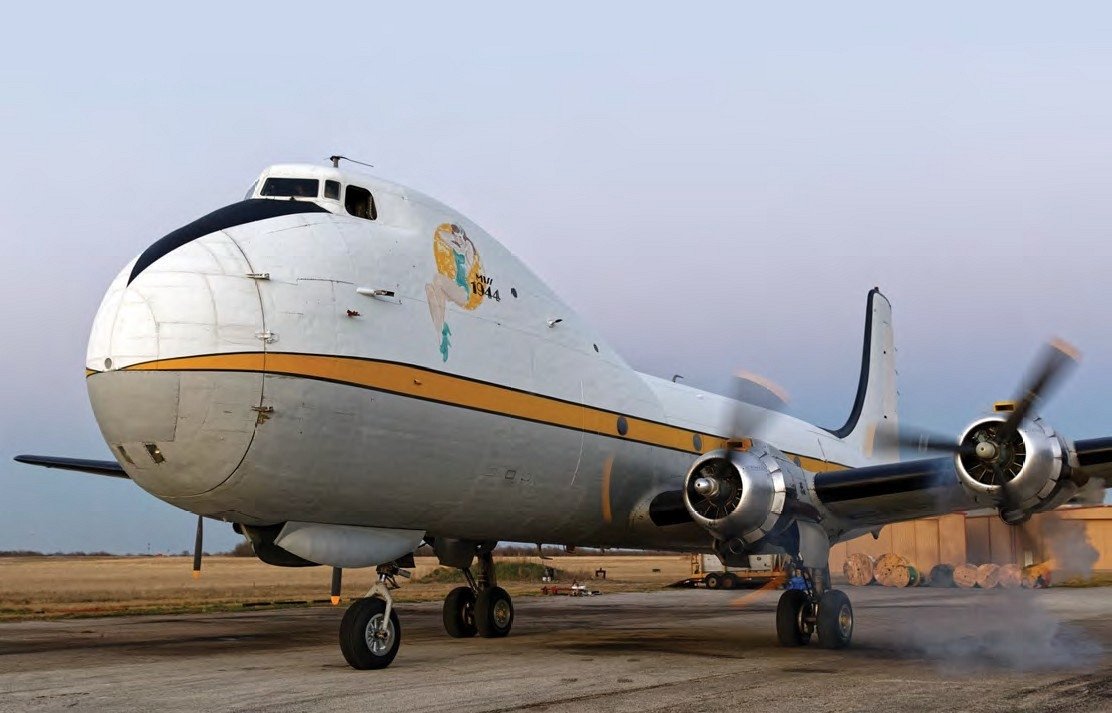 The wonderful sight of CarvairN89FAhaving its Pratt&WhitneyR-2000 engines run up. It is hoped it will fly again during 2017.
RICHARD VANDERVORD

At Gainesville Airport in the far north of Texas, it is hoped that one of the world’s two potentially airworthy examples of the Aviation Traders ATL-98 Carvair, N89FA Fat Annie, will fly again during the spring of 2017. The Pratt & Whitney R-2000 engines have been run successfully, and work has been carried out on the undercarriage and the paintwork, but plans to ferry the former British Air Ferries machine to Chino, California during 2016 for a full overhaul were thwarted by last-minute regulatory problems.

There have been suggestions that the Carvair — which was acquired by owners South African Air Lease during 2012 — could even be destined to join the display circuit in original period colours, although the ability of this unique design to carry unusual loads cannot be overlooked.

The machine, originally registered G-ASHZ, was the ninth of 21 Carvairs built by Freddie Laker’s firm Aviation Traders Ltd (ATL) at Southend and Stansted. The ATL-98 was a conversion of the Douglas DC-4 with an 8ft 8in-long extension to the forward fuselage, which featured a bulbous hump to accommodate the flightdeck, a sideways-hinged nose door, and a redesigned and enlarged vertical tail section.

In July 1963, ’ASHZ became the fourth Carvair to go into service with British United Air Ferries, bearing the name Maasbrug. During September 1967, BUAF changed its name to British Air Ferries and ’ASHZ was rechristened Fat Annie, a name it bears to this day. The machine left the UK in 1979 after being acquired by Dallas, Texas-based Falcon Airways and registered N89FA, but within a year that cargo hauler failed. After several further changes of ownership, during 2003 the machine went to Gator Global Flying Services of Grayson County, Texas, seeing limited use on ad hoc cargo charters. It achieved fame in August 2005 when it was used for a series of extraordinary parachuting missions during the World Freefall Convention in Rantoul, Illinois, dropping some 80 jumpers on each flight and setting a record for the largest number of people to ever fly in a Carvair.