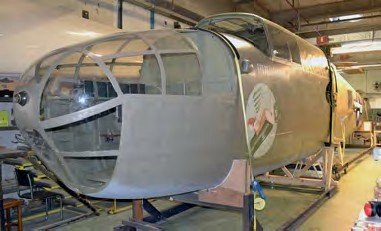 The Brussels Air Museum Foundation’s North American B-25J Mitchell 44-30925/N9494Z will soon appear on screen in the new George Clooney-produced TV mini-series, Catch-22. Eric Dessouroux from the foundation says, “At the start of 2018, the producers were looking for an B-25 for studio fi lming, and contacted the Brussels Air Museum Foundation. Our Mitchell was not yet ready for such a role, and a lot of work had to be done, but our team worked very hard. The B-25 left our workshop on 16 April 2018 for the studios in Rome and she came back to Gembloux on 24 September... 44-30925 is now resplendent in her new Yankee Doodle fi lm markings.”

This is the fourth major fi lm credit for ’925: it fl ew as Laden Maiden for the original big-screen production of Catch-22 back in 1969, and as Gorgeous George-Ann in Hanover Street, shot primarily at Little Rissington nine years later (see Aeroplane July-August 2018). In 1980 it briefl y appeared as set-dressing for the fi lm Eye of the Needle fi lmed at Blackbushe, where the bomber had been in storage. It then spent many years in storage at a variety of locations, including Coventry, Headcorn, North Weald, Sandtoft and Doncaster, before moving to Belgium in 2006.