The Aeronautica Militare Italiana celebrated the centenaries of five of its fighter squadrons at Grosseto Air Base on June 24–25. Italy’s first Gruppi (squadrons) were established during World War One in 1917.

Before then, the air force’s main flying unit was the Squadriglia (flight). The five units were established on different dates in 1917: 9° and 10° Gruppo on April 10, 12° Gruppo on May 10, 13° Gruppo on November 8 and, finally, 18° Gruppo on December 24. According to Aeronautica Militare Italiana tradition, the Gruppo numbers are usually written in Roman numerals: IX, X, XII, XIII and XVIII. Over the years, the Gruppi have used every frontline type flown by Italy, starting with Nieuport and SPAD biplanes and moving on through such famous machines as the Fiat CR32, Macchi MC200 and MC202, P-39 Airacobra, F-51 Mustang, Vampire, F-86E Sabre, F-104 Starfighter and F-16 Fighting Falcon, right up to the current Eurofighter F-2000A and Lockheed Martin F-35A Lightning II. Five aircraft from these squadrons, specially marked for the celebrations, were on display over the weekend. On June 24, a reunion for pilots and personnel who served in the five squadrons was held at the base. The next day was marked by a small public air show over the sea at Marina di Grosseto. The flying was opened by demonstrations from the Reparto Sperimentale Volo (flight test wing), with solo performances by the F-2000A Typhoon, Tornado IDS, C-27J Spartan and T-346A Master and then the main event, the Aeronautica Militare Italiana air demonstration team Frecce Tricolori. Other participants were the Belgian Air Component F-16A demo solo, the Breitling team with its L-39s, a privately owned T-6A Texan, an HH-139A, and a KC-767A simulating the in-flight refuelling of Tornados.

1 F-2000A MM.7340/4-9 wears 9° Gruppo’s squadron badge (a white horse) over a number ‘9’ on the port side of the fin and on the airbrake. The centennial colour scheme also features the white horse over Roman numerals IX on the starboard side. Alex Marchesin 2 F-35A MM.7337/32-13 (c/n AL-06) is the flagship of the 13° Gruppo, the first Aeronautica Militare Italiana operational squadron to fly the type. This is the sixth F-35A Lighting II built by the FACO factory at Cameri. Riccardo Niccoli 3 Tail art created by 13° Gruppo to mark its 100th anniversary features the legend Don Quixote and the squadron badge. These markings were only applied to the port side of aircraft MM.7337/32-05 and MM.7357/32-07. Riccardo Niccoli 4 F-2000A MM.7341/36-10 sports a special colour to mark 10° Gruppo’s centenary. The markings include a black horse on both sides of the tail, a red pike on the airbrake and red fore planes. Alex Marchesin 5 Dominated by a World War Two-style colour scheme, 12° Gruppo’s anniversary colour scheme on F-2000A MM.7318/36-12 features a black prancing horse on the tail set on sand an d brown colours which extend to the fore planes. Alex Marchesin 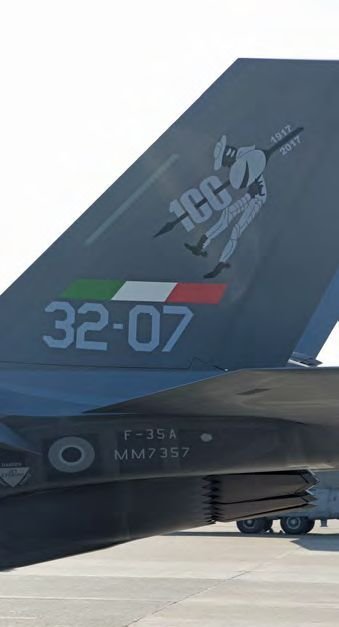 18° Gruppo F-2000A MM.7293/37-18 has its tail, spine and fore planes painted in black emblazoned with green artwork. The tail’s starboard side features a large wasp, the unit’s motif during World War Two, and Roman numerals XVIII on the port side.
Alex Marchesin 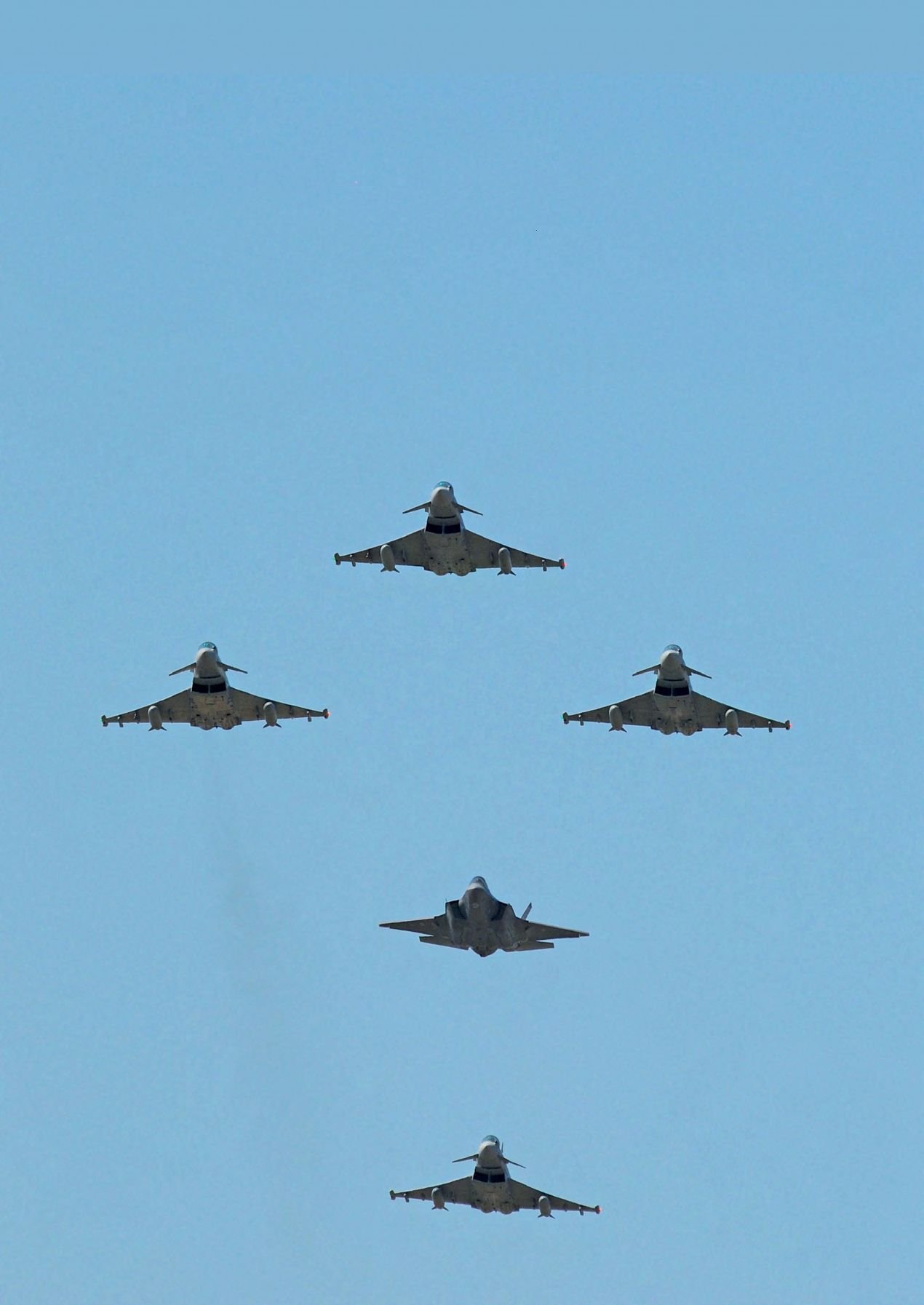 For many enthusiasts, the highlight of the show was the presence of the five air force jets, four Typhoons and a brandnew F-35A, in special colour schemes, something never seen before with Aeronautica Militare Italiana machines.

Despite the sensationally painted aircraft, the F-35A provoked most interest. The occasion was the very first opportunity for the Italian media to see and photograph operational aircraft in action and on static display. All three Lightning IIs assigned to 13° Gruppo were at Grosseto; the other four Italian aircraft are flying at Luke Air Force Base, Arizona, at the F-35 International Training Center. The eighth F-35A for the Aeronautica Militare Italiana was delivered at the beginning of July.