THE AIRCREWS of the carrierbased combat aviation component of the Russian Naval Aviation (RNA), serving with two shipborne fighter regiments assigned to the Northern Feet, are set to endure a prolonged period of land-only operations. The reason is the unavailability of the Russian Navy’s sole and longtroubled aircraft carrier, Admiral Kuznetsov. Known affectionately by the Russians as ‘Kuzya’, the most prominent Russian Navy ship is slated to undergo a major refurbishment and upgrade. As a consequence, the 2017 training campaign at the Nitka ground carrier simulator complex at Saki in the Crimea Peninsula was slashed and the aircrews have lost their currency for shipborne operations.

This simulator complex was built in the 1980s and consists of a ski jump and arrestor system to resemble as close as possible carrier deck take-off s and landings. It was maintained in operational condition until 2016, but it has never been overhauled. Now it is in acute need of major and potentially expensive rebuilding, but so far no funding has been allocated.

Another carrier deck simulator system was built at the Russian Navy’s 859th Combat Training and Aircrew Conversion Centre at Yeisk on the Azov Sea coast. However, the construction process encountered serious technical problems and its completion has been delayed by at least six years. As of November 2017, the carrier simulator complex in Yeisk was still under construction and its arrestor system was not commissioned in service.

The fleet of the RNA carrierbased combat aviation component currently consists of 19 MiG-29KRs and four MiG-29KUBR two-seater naval Fulcrums taken on strength in 2015 in addition to 10 to 14 Su- 33 Flanker-Ds of the 297th OKIAP maintained in airworthy state at any given moment.

Baptism of fire in Syria

The aircrews of the 100th OKIAP and 279th OKIAP, shipborne regiments equipped with the MiG-29K, MiG-29KR and Su-33 respectively and stationed at Severomorsk-3 near Murmansk, have gained combat experience during the much-publicised Syrian cruise by ‘Kuzya’ between October 2016 and February 2017.

The cruise saw as many as ten Su-33s deployed on the ship, with five MiG-29KR/KUBRs. ‘Kuzya’ left its base at Murmansk on October 15 and by November 3 it had arrived at its designated area of operations in the eastern part of the Mediterranean. The first live missions off the ‘Kuzya’ deck were reported on November 15.

One MiG-29K and one Su-33 were lost in the course of training operations in November and December 2016 off the Syrian coast, reportedly due to technical issues with the arrestor system of ‘Kuzya’ leading to snapped wires.

There is no off cial information released about the root cause of the problem. This serious safety issue was among the factors that prompted the shipborne fighter force to relocate to the Hmeimim/ Latakya Air Base in Syria, from where the MiG-29KR/KUBRs and Su- 33s flew the vast majority of their combat sorties.

As many as 420 combat sorties (including 117 at night) were logged by the Su-33s, MiG-29KRs and MiG-29KUBRs to deliver strikes on no fewer than 1,000 individual targets on Syrian territory. The combat sorties from the ship were undertaken at a radius of up to 162 nautical miles (300km).

According to Naval Aviation’s Commanding Officer Major General Igor Kozhin, in 2016, some 50% of the active Su-33 fleet underwent a fast-track upgrade with the SVP- 24-33 add-on navigation/attack system. He also confirmed that the eventual upgrade plan to get the attack capability covers the entire Su-33 fleet.

This inexpensive upgrade designed by the small Russian high-tech company named Gefest i T provided the Flanker-D with the capability for delivering ‘dumb’ bombs, weighing 250kg (550lb) and 500kg (1,100lb) with a pretty good accuracy on ground targets with known coordinates, by using highly accurate positioning information combined with precise calculation of bomb ballistic parameters. This enabled the Su-33 to be involved in striking ground targets in Syria during the cruise as a fully fledged asset of the Russian air group operating there. 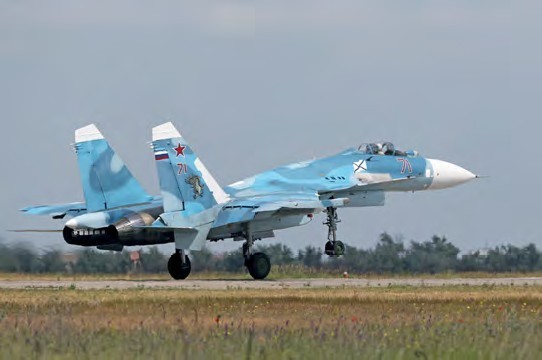 The Flanker-D gained strike capability to use freefall, unguided bombs, thanks to the rapid integration in 2016 of an off -the-shelf navigation/attack system, the SVP-24-33. This capability was used successfully during the type’s participation in the Syrian campaign between November 2016 and January 2017.
Andrey Zinchuk via Alexander Mladenov 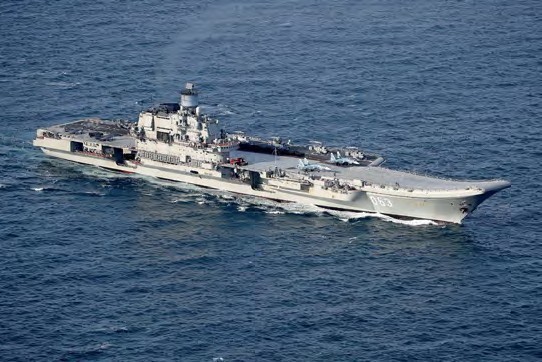 ‘Kuzya’ seen on its way back home, while transiting the English Channel. Two Su-33s can be seen at the two forward launch positions, together with two Mig-29KRs behind the island, two Ka-29s, two Ka-27PSs and one Ka-52.
UK Ministry of Defence

The SVP-24-33-upgraded Su-33s deployed onboard ‘Kuzya’ amassed more than 360 combat sorties, according to information released by the Russian MoD. This figure includes more than 30 sorties flown from ‘Kuzya’ while the remaining 330-plus were amassed while operating from Hmeimim/Latakya Air Base. Some 40% of these sorties were undertaken while receiving inflight targeting. On ten occasions, the in-flight targeting information was received via datalink from the ASPPD-24 mission planning system onboard ‘Kuzya’, while in another 132 strikes the information was provided by Russian special operation forces’ reconnaissance teams situated in close proximity to the targets. In addition, on 318 other occasions the in-flight targeting information was handed over from the command post of the Russian aviation group at Hmeimim/Latakya Air Base.

During the Syrian cruise, the MiG- 29KRs and MiG-29KUBRs underwent a field testing programme, which included a number of real-world combat sorties against anti- Assad targets. These sorties were flown from both the ship’s deck and Hmeimim/Latakya Air Base, employing unguided and guided ordnance. The naval Fulcrum was spotted onboard ‘Kuzya’ totting KAB-500Kr 500kg (1,100lb) TVguided bombs/missiles, as well as OFAB-250 250kg (550lb) free-fall fragmentation/high-explosive bombs.

The ship is currently stationed at the 35th Ship Repair Plant Zvezdochka branch situated in Roslyakovo near Murmansk and is still maintained in a nominal operational condition (without flight operations) while waiting for the commencement of the major refurbishment and upgrade programme due to begin in early 2018. Officially designated by the Russian Navy as a heavy aircraftcarrying cruiser with 55,000 tonnes full displacement, it takes on flagwaving and training roles, rather than having real-world operational significance. During its eight long cruises since it was commissioned into service in 1992, it has been plagued by persistent problems, with its powerplant using steam boilers running on heavy oil fuel.

The major refurbishment and upgrade effort was to be priced between RUB 40 and 50 billion and was to take at least two years to complete. The ship was originally slated to undergo a complete overhaul of its troublesome powerplant, notorious for the heavy smoking, together with upgrades of the arrestor system, electronic and radar systems.

There was also a chance that the main strike weapon onboard ‘Kuzya’, the P-700 Granit (SS-N- 19 Shipwreck) anti-ship cruise missiles housed in 12 launchers under the flight desk in the nose might be replaced by the more modern, compact and flexible Kalibr-NK system (housed in 3S14 vertical launchers), useful against sea, underwater and land targets. The aircraft capacity will remain unchanged – 26 to 28 fighter jets, plus up to two dozen helicopters. At the conclusion of the refurbishment and upgrade effort, the ship will be good for at least 20 more years of service.

In early October 2017, however, the MoD has reportedly abandoned the upgrade plans and instead decided to go ahead with the overhaul option for ‘Kuzya’, priced at about RUB 25 billion.

The Russian MoD plans for the construction of new aircraft carriers are still in a preliminary stage. According to Yury Borisov, Deputy Minister of Defence responsible for new weapons systems procurement, the go-ahead for the construction of a new aircraft carrier could be given in 2025. The Russian Navy concept foresees a new ship with a 95,000 tonne displacement capable of accommodating an air wing of 80 to 90 aircraft.

The MiG-29KR is the first true multirole fighter of the RNA. It can employ air-to-surface guided weapons while retaining the full air-to-air capability, but has less range than the Flanker-D.
Andrey Zinchuk via Alexander Mladenov