Flybe is Europe’s biggest regional airline and, as Andreas Spaeth learns, it has plans to expand despite an uncertain future due to Brexit and other factors

It’s not easy to get from the European continent to Exeter in the southwest of England, where the headquarters of Europe’s biggest regional airline is located. And it’s even more difficult on this morning, as the delay of Flybe’s flight from Paris CDG to the British city is getting longer and longer.

In the end, the Bombardier Dash 8 Q400 takes off almost two hours late, with passengers waiting in vain for an explanation or excuse on board. This is only delivered later by Luke Farajallah, Chief Operating Officer of Flybe, currently the fastest growing among Europe’s top 20 airlines. And this expansion is exactly where the problem lies.

“We are suffering from a pilot shortage, and if someone calls in sick, this sometimes leads to a domino effect like today on the Paris flight,” explains Farajallah in an interview with AIR International. “Currently we are employing 700 pilots, we need 18 per aircraft, and at our growth rate it is a challenge to find sufficient cockpit crews, as the overall pilot base is diminishing, as other airlines suck them all up.” Therefore, Farajallah admits, “Flybe is operationally quite complex”. 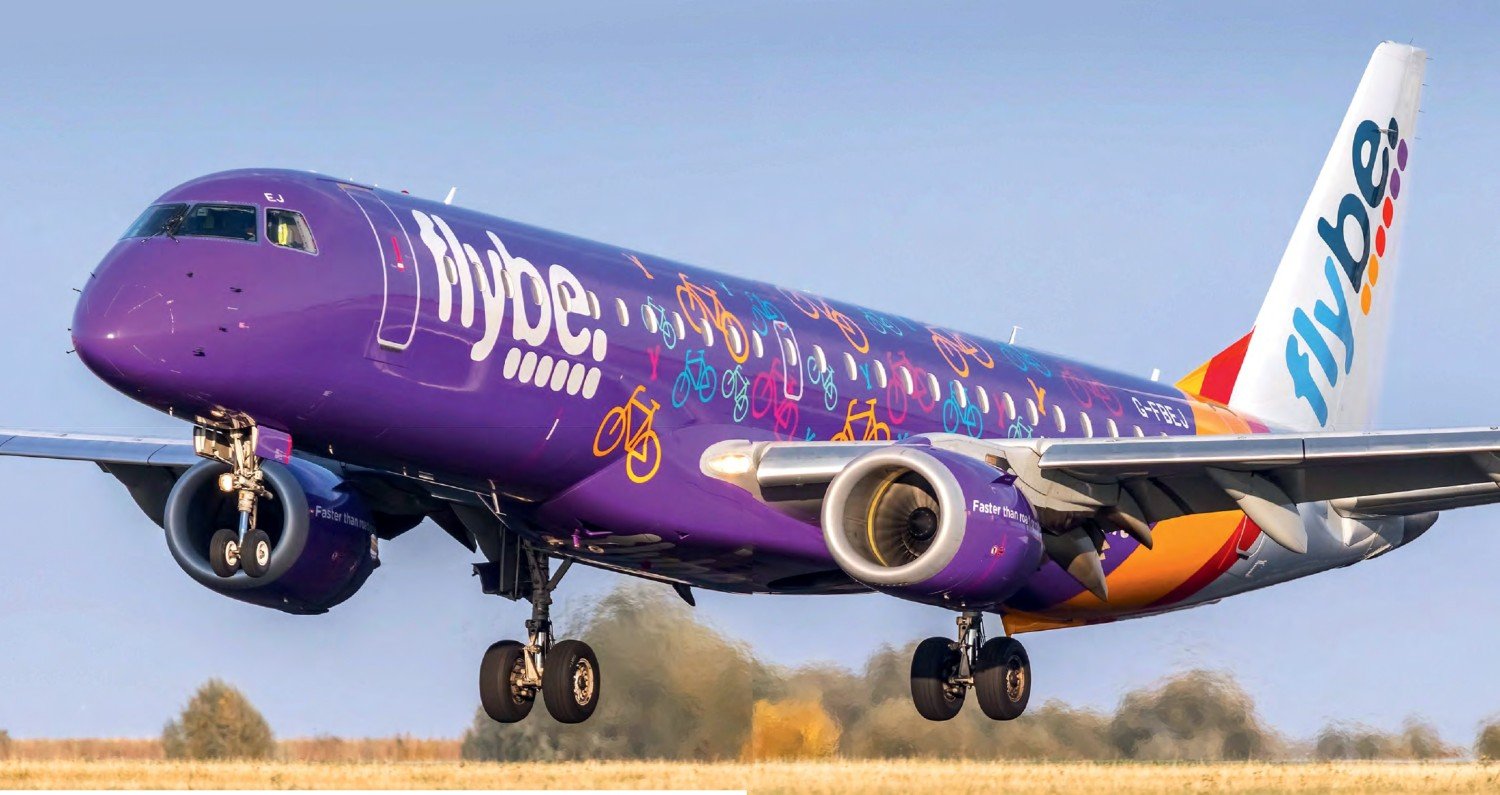 The E195s that entered service from the mid-2000s will all have left the airline’s fleet by 2019-2020. Matthieu Douhaire/AirTeamImages

Hardly any other airline works with a decentralised route network such as Flybe’s. Besides its corporate headquarters in Exeter, it operates ten bases at British regional airports. The biggest is Birmingham, where currently 11 of a total fleet of 76 aircraft are stationed, followed by Southampton (nine aircraft) and Belfast (eight). Overall, Flybe serves 40 regional airports in the UK and boasts by far the densest domestic network.

Chief Revenue Officer Vincent Hodder told AIR International: “One in two passengers flying within the UK without touching London is a Flybe customer. We are operating 53% of all domestic fiights within the main British Isles.”

In contrast to the European continent, there are hardly any high-speed rail lines here and road travel is usually slower. That’s why Flybe has painted the messages ‘Faster than road or rail’ and ‘Think in minutes, not miles’ on its aircraft, which have shone in a bright purple livery since a rebranding in 2014.

Farajallah jokes: “We are lucky that although the train system in the UK is not so good, we still have a high speed mode of transport here – it’s called Flybe! Our average flight lasts 53 minutes, the same trip by car, train or ferry takes between three and nine hours.”

Flybe is so convinced of its business model that it’s trying to export it to the continent. And this is despite the airline, founded in 1979 as Jersey European Airlines and which then operated as British European from 2000 and under its current name since 2002, was close to bankruptcy as recently as 2014.

But the then Chief Executive Officer Saad Hammad came in during 2013 and succeeded in turning around the company; in the financial year 2015-2016 Flybe made a profit again. In the first half of 2016-2017 however, profits halved, and shortly before this announcement Hammad unexpectedly left his post without giving reasons.

”One in two passengers flying within the UK without touching London is a Flybe customer. We are operating 53% of all domestic flights within the main British Isles.”

’Faster than road or rail’ is one of the slogans used by Flybe on its aircraft to help promote the connectivity the airline provides. Flybe

He was facing difficult times in any case: British airlines look to an uncertain future as it remains unclear what ramifications Brexit will have on their traffic rights to the continent, and within the European Union. At the same time, the pound weakened, while lacklustre passenger demand and overcapacity in European short-haul markets further worsened the outlook. During the first half of the 2016-2017 financial year, Flybe’s capacity increased 13.5%, while actual passenger numbers only rose by about 7%, leading load factors to fall to 72%.

There’s a lot of work for the new woman in the top post: Christine Ourmieres-Widener, formerly with Air France and the CEO of Cityjet for five years, took over as CEO of Flybe in January 2017. The analysts of the CAPA Centre for Aviation, a Sydney-based consultancy, warn: “A key question [for her] will be whether to continue with such aggressive capacity growth in the face of falling fares.” Flybe’s own take on the market situation is, “turbulent with limited forward visibility”. And that during a period when it is trying to position itself outside of the UK for the first time. 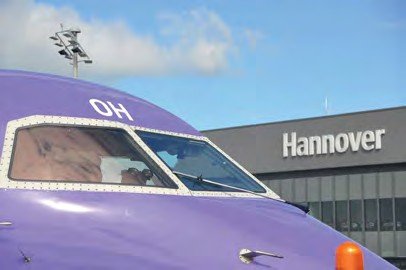 In 2016 Flybe launched its first routes not touching its home market at all – from Hanover in Germany. The airline sees great opportunity in European markets. Andreas Spaeth 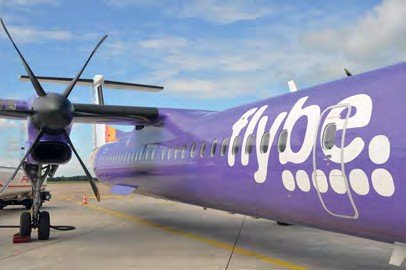 Flybe is one of the major operators of the Bombardier Dash 8 Q400. Andreas Spaeth

Network: Flybe flies to 40 destinations in the UK and 35 in nine other European countries, offering 218 routes in total. Only one does not touch the UK, from Hanover to Milan-Malpensa.

In August 2016, Flybe launched its FIrst two routes not touching its home market at all – from Hanover in northern Germany to both Lyon and Milan-Malpensa. While the Italy route is still served, Lyon proved to be a flop and was axed in January.

The British carrier sees enormous potential on the continent. Hodder says: “Currently there are about 13 million passengers travelling on routes without any low-cost carrier [LCC] or very limited competition from them. We are a regional airline flying underneath the radar of LCCs, which is a great opportunity.”

On a whopping 80% of its 218 routes, serving 75 destinations in ten countries, Flybe flies without any competition and easyJet also flies on just ten of its routes. Flybe’s big advantage here is its efficient fleet of 54 Q400s at the end of 2016. The regional carrier is the second biggest operator of the turboprop worldwide. With just 78 seats, it enables the airline to operate a route profitably if it yields 40,000 passengers annually. In contrast, to profitably operate a route with an Airbus A319, its smallest aircraft, easyJet needs at least 100,000 paying customers per year.

Flybe sees 39 million people in western Europe currently underserved with regional connectivity. “If we could carry just 10% of that, we could double in size,” says Hodder. Such bold visions could be acutely threatened by Brexit, but Hodder insists: “I don’t think Brexit will force us to give up such routes. We will always find ways to get around restrictions that might be imposed by governments. One of our great advantages is to be flexible and adapt to change, and very quickly.”

Flybe tries to combine elements of both network carriers and LCCs. Hodder explains: “We have an offering of frequencies and density in our schedules equal to a network airline, and a cost base like an LCC. We sell 80% of our tickets via our website, another LCC element. At the same time, more like a network carrier, we are working a lot with codeshare agreements and interlining, with Air France, Etihad, Emirates or Virgin Atlantic [and] in Europe also with Air Berlin now.”

A major current focus for Flybe is Germany, where it has expanded its offering considerably, with new fiights from Cardiff to Berlin and from Düsseldorf to Doncaster Sheffield and London City being the latest additions. London has played a relatively small role for Flybe since it left Gatwick in 2013 after 23 years and sold its 25 slot pairs there to easyJet for £25 million. Since then it has based five aircraft at London City and tried in vain to get access to Northolt Airport, operated by the military, but also open for civil business jets.

But Flybe took a surprise move to Heathrow in March 2017, with seven flights from Monday to Friday to Aberdeen and Edinburgh, using slots IAG disposed of as a prerequisite of its takeover of BMI in 2012. Düsseldorf will be upgraded to Flybe’s first base outside the UK by autumn 2017. Farajallah says: “We plan to station three Q400s there initially and hire German crews for the cockpit and cabin.” He hopes to tap into the Dutch and Belgian pilot markets from here. Currently, Flybe offers five UK destinations from Düsseldorf with up to 77 weekly flights.

Flybe has announced it is to end its almost decade-long franchise agreement with Scottish carrier Loganair, started in 2007, by the end of August 2017. Flybe cited, “a failure to agree future operational standards and commercial agreements” as a reason. Flybe Chairman Simon Laffin stressed “Scotland is very important to Flybe” and promised to announce plans on continuing to serve Scotland “in due course”.

In Scotland the decision was met positively, with Shetland Islands MSP Tavish Scott stating: “Flybe may have some advantages, but their customer care is raised with me time and time again.”

Flybe has come a long way to achieve milestones in fleet rationalisation and ironing out costly missteps of former company leadership. A central one of those bad decisions was the purchase of 14 Embraer E195 jets, which joined the fleet from 2006. Shortly before he stepped down, former CEO Hammad told AIR International he thought it had been a “crazy” order.

Flybe intended to compete more effectively against LCCs with the big jets that seat 118, but they turned out to be “much too expensive to operate”, according to Hammad. The remaining nine E195s will have left the fleet by 2019-2020. While so far only 20% of the fleet were owned by the airline, this is up to 34% now and rising, the goal being 50:50.

Flybe also owns seven out of the 11 smaller 88-seater E175s it operates and wants to make use of their longer range, mostly from its hub airports. Four more E175s for Flybe are still on Embraer’s order books, with deliveries recently having been deferred to early 2019.

The most important tool for Flybe’s growth remains the Q400. The airline has reached a deal with Republic Airways of the US, which flies commuter services for United Airlines, which is sending 15 second-hand Q400s to Flybe. Farajallah says: “This summer we will have eight of those in service.”

It comes in handy that Flybe has its own MRO subsidiary, Flybe Aviation Services, operates a flourishing facility at Exeter. This handles Flybe’s own fleet, including modifying the incoming Q400s, but also many aircraft of third party operators from Finnair to Aegean Airlines to Air Greenland. Five ATR 72-600s, which Flybe operates in Stockholm for SAS, and two Brussels Airlines Q400s are also serviced here. 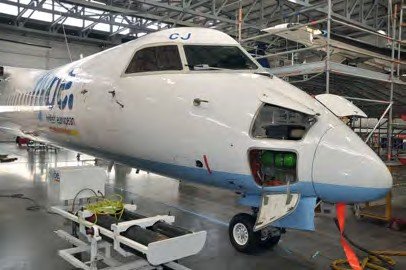 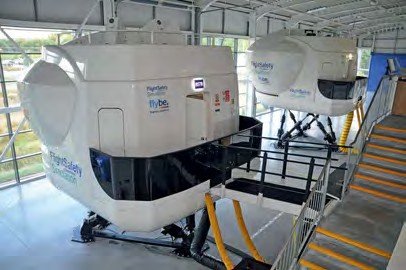 The Flight Safety International simulators within the Flybe Training Academy at the airline’s Exeter International Airport in the UK, which also includes a cabin door trainer, 26 purpose-built classrooms and an integrated apprentice workshop. Andreas Spaeth

But Flybe hasn’t lowered its ambitions by any means. “We have a desire to be European,” says Hodder, “and there is no better time than now to start this journey into the future. You have to distinguish between a short-term uncertainty and the long-term success of the Flybe business model.” 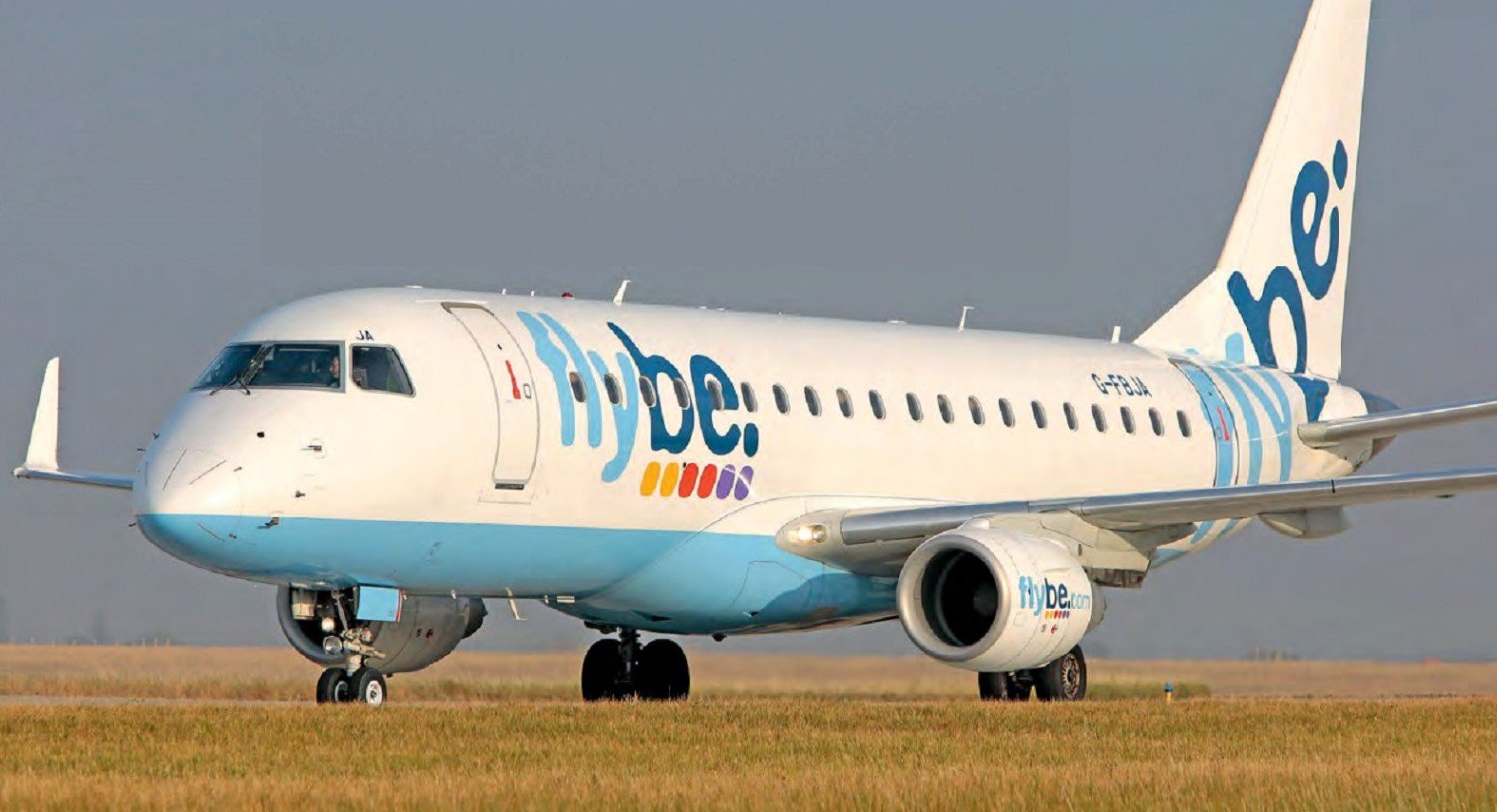 Although Flybe is divesting the 118-seat E195s, it intends to make use of the longer range of its 11 smaller 88-seat E175s. Paul Marais-Hayer/AirTeamImages