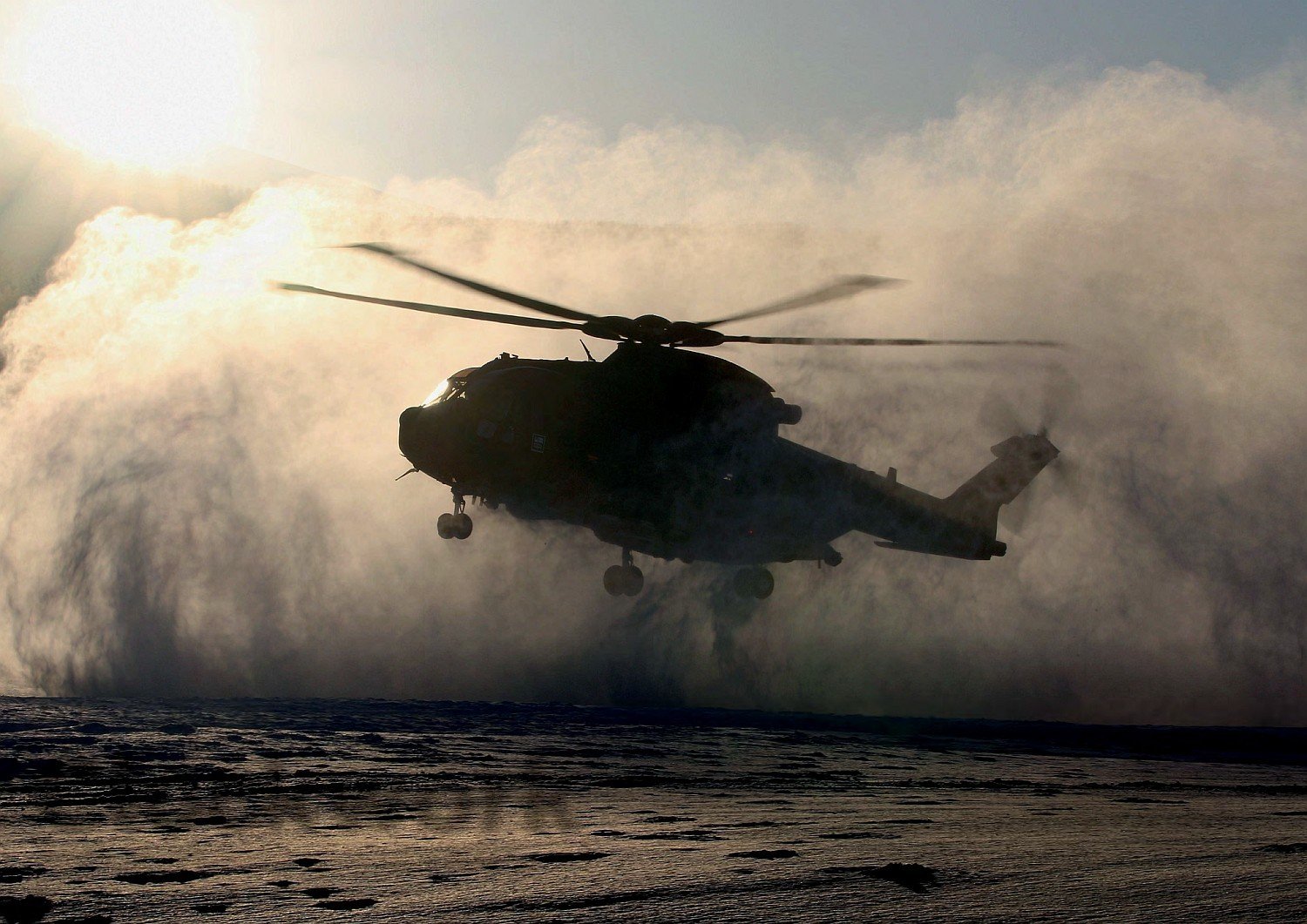 Located approximately 930 miles (1,500km) north of the Norway’s capital Oslo and 200 miles (320km) inside the Arctic circle, Bardufoss Air Station in Troms county is where British forces deploy each year to complete their extreme cold-weather training as part of exercise Clockwork. In February 2019, Commando Helicopter Force (CHF) celebrated 50 years of deployment here, reflecting the strength of the relationship existing between the UK and Norway. Norwegians have a saying: to operate in the Arctic, you have to train here. This is why British forces spend five to six months training there each year. Exciting and harsh, the environment must be respected at all times. Remove focus and the environment has the potential to take life.

Westland Wessex helicopters from Support Helicopters Force, first visited Bardufoss in 1968 when deployed aboard the aircraft carrier HMS Bulwark (R08). With aircraft and aircrew struggling to cope with the harsh environment, the UK made the decision to set up a permanent training facility here. One year later, 846 Naval Air Squadron (NAS) based at Royal Naval Air Station Yeovilton in Somerset became the first squadron to deploy here with four Wessex helicopters. Run by the Fleet Air Arm, base facilities were initially very simple comprising a central building known as the boiler house and old railway carriages and huts providing accommodation and line buildings. These remained until 1983 when the old Clockwork complex was built. JHC took ownership from the Fleet Air Arm in 2000 the new facilities were built in 2016 and were operational in approximately four months. The current infrastructure contains everything you would expect to enable Royal Marines and deployed aircrew to operate for an extended period.

Clockwork headquarters is so well established on the south side of Bardufoss air station, the deployed units literally plug in their systems and commence training. Operational engineering facilities include a dedicated aircraft line building, five Rubb military hangars (which can support up to two Merlin HC3s/ HC3As, or four Merlin HC4s with its folding tail and main rotor blades), two Chinooks HC5s/ HC6s and four Wildcats AH1s), aircraft support hangar, stores support plus a detachment hangar. Whilst Clockwork’s infrastructure is permanent, Bardufoss is considered a temporary British base on Norwegian soil.

With the Russian border located approximately 350 miles (560km) to the east, it is easy to understand why British forces deploy here. With 3 Commando Brigade and CHF elements co-located, Bardufoss offers an outstanding joint warfare generation capability with land, sea and air training facilities within relatively easy reach. From a logistics standpoint, the main sea point of disembarkation is located 40 minutes away by road at Sørreisa, with Bardufoss air station the main air point of disembarkation. Equipment and personnel can be moved quickly from the UK to Norway. The main aerial live firing range is located less than ten minutes’ flight time away at Setermoen, whilst 3 Commando Brigade utilise firing ranges within 30 miles (50km) of the base. The base is surrounded by dramatic training areas where unrestricted low flying is permitted, subject to reindeer and mink avoidance. With ambient air temperatures falling to -30ºC (-22ºF), mountain ranges, deep snow and degraded visibility, Bardufoss provides an extreme cold weather training environment that cannot be replicated elsewhere. The training and tactical flying opportunities afforded are breath-taking when weather conditions allow, a variable to be respected at all times.

3 Commando Brigade, which comprises Royal Marines, Royal Navy and British Army personnel, is the UK’s commando force and Clockwork is geared to supporting them. To do so, Clockwork must produce environmentally qualified aircrew for JHCs Aviation Task Force 2 (ATF2), whose role it is to support them. ATF2 currently comprises approximately 30 JHC helicopters, which includes Apache AH1, Chinook HC5/HC6, Merlin HC3/HC3A/HC4 and Wildcat AH1.

Aircrew deploy to Bardufoss to complete environmental qualifications (EQ) or to be refreshed in them. Aircrew are cleared to fly once they have completed their compulsory four-day Royal Marines cold-weather survival course. Operations inside the Arctic Circle are so hazardous personnel can quickly find themselves in potentially lifethreatening situations.

After three nights sleeping outside in the elements, the training culminates in the legendary icebreaking drill, where personnel are taught how to get out of the ice if they get into trouble. 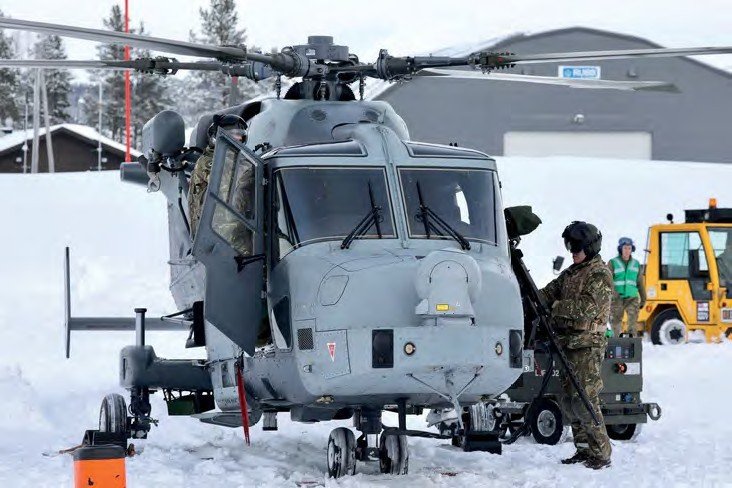 Despite heavy snow, 847 NAS aircrew including the squadron CO, prepare their Wildcat AH1 ahead of a next live firing mission at Setermoen range. RUBB hangars which house the deployed helicopters are seen in the background.

EQ complete, the Officer Commanding Clockwork hands aircrew over to the CHF Chief of Staff, who is also the Commanding Officer of the Aviation Task Force (Maritime). The force generation of this collective training product is twofold: to participate in the biannual NATO exercise Cold Response 2020 held in Norway; and to develop interoperability with NATO partners in a region of key strategic importance.

The primary objective for each squadron is their individual environmental air training course, which comprises a definitive number of sorties and profiles that must be achieved to produce either a limited or full EQ. These profiles include area familiarisation, snow landings and close air support (CAS), mountain flying, daylight and night-time navigation (using night-vision goggles), underslung load lifts, circuit and formation snow landings, followed by extreme cold weather troop drills and night mountain flying. Each squadron then proceeds to type-specific training, provided they have achieved the EQ required. If the weather conditions deteriorate and training time is lost (as it was this year), elements such as night mountain flying may be dropped, or training could be focused on fewer aircrew to ensure sufficient personnel achieve the base-level training required. At this stage, senior detachment personnel are working hard on the mathematics necessary to find the necessary flying hours to produce the maximum training output.

Weather is the priority in this environment. From an engineering perspective, operational limits must be adhered to at all times. Wildcat operating level limit is -26°C (-15°F), Apache is -32°C (-26°F), whilst Merlin, with its three-engine anti-icing capability, is -40°C (-40°F). At -30°C (-22°F), training stops for safety reasons. Aircrew are also bound by Clockwork’s flight regulations, which are borne out of experience. These state that at 1,200m visibility, aircrew should aim to return to Bardufoss. At 800m visibility, aircrew should land immediately. For safety reasons, aircrew always carry a Bergen rucksack containing the survival equipment necessary should they need to land quickly in an emergency.

There is no such thing as a standard mission in the Arctic. The sheer difficulty of flying and operating battlefield helicopters in Norway provides constant lessons for aircrew and maintainers. EQ is not just about flying the aircraft, but is also about making the right decisions, as Lieutenant Commander Alexander Hampson, 845 NAS Senior Pilot, highlighted when considering a confined area landing.

He said: “We start from 100ft aiming to intercept a gate at 50ft with a relatively low speed. The aircraft will become enveloped with snow at about 30ft, at which point the pilot has to use his carefully selected references [vehicle, rock, tree] to continue the descent down to a 2ft hover. If the pilot maintains a decelerating attitude from the 50ft gate, the aircraft will almost land itself. The skill is knowing how long or how quickly you can shift from one reference to another. This is why we have strong talk down to the ground from the non-handling pilot and the crewman; it is a real team effort.”

Aircrew confirmed the temperatures this year were a lot colder, with the snow being very granulated. One pilot described it as like “flying into a bag of sugar”.

Clockwork’s facilities can support two concurrent JHC units during two training periods. This is primarily a function of accommodation limits. Three Apache AH1s from 4 Regiment Army Air Corps (656 Squadron) based at Wattisham Airfield, Suff olk and four Wildcat AH1s from 847 NAS based at Yeovilton deployed from early January to work alongside each other. 656 Squadron Apaches focused on the initial stages of their EQ as this was their inaugural deployment as Major Huw Raikes, Officer Commanding, 656 Squadron explained: “The Army Air Corps has operated here for a long time now, but we were looking to develop a basic day and night capability. The extreme cold weather training we achieved during Clockwork will enhance the capability of the helicopter attack squadron and we can now support 3 Commando Brigade on future exercises in the extreme north and in future environments. The extreme conditions have highlighted issues the unit’s personnel need to deal with, but there are now ambitions for Arctic training to become a regular event for the helicopter.” 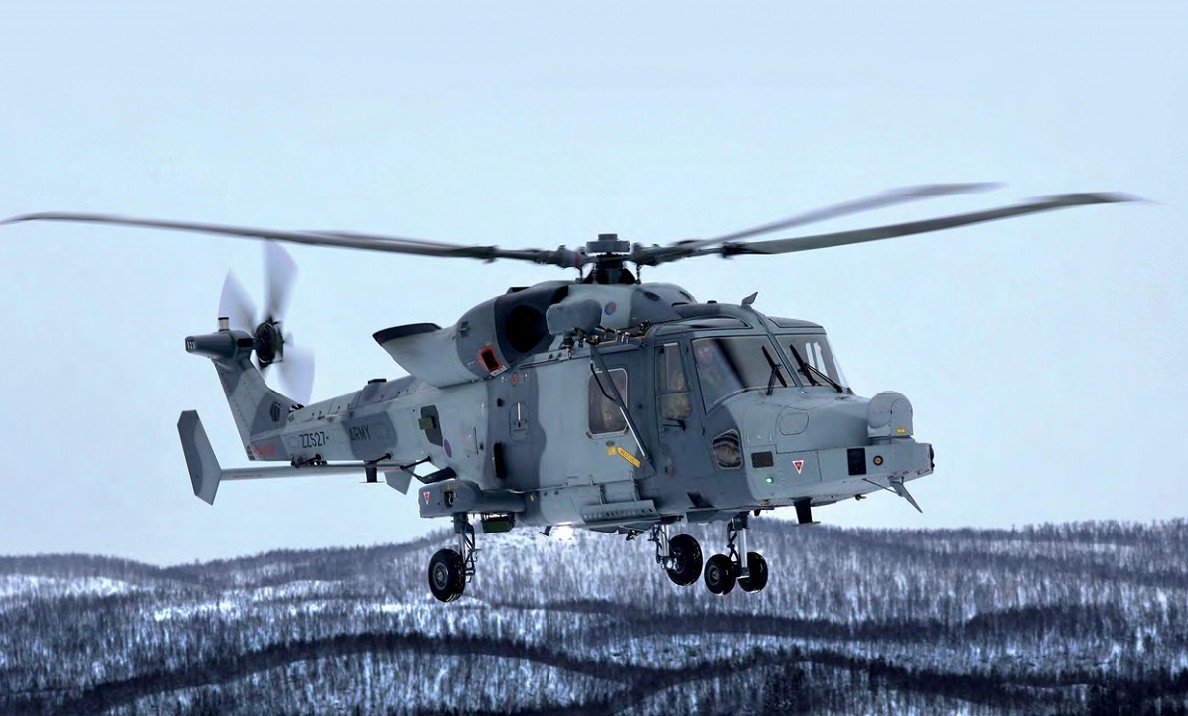 847 NAS Wildcat transiting to the Setermoen range less than ten minutes’ flight time from Bardufoss Air Station. As weather conditions deteriorated and visibility closed in on the range, this aircraft landed in the snow to comply with Clockwork regulations until visibility improved to exceed 1,200m. 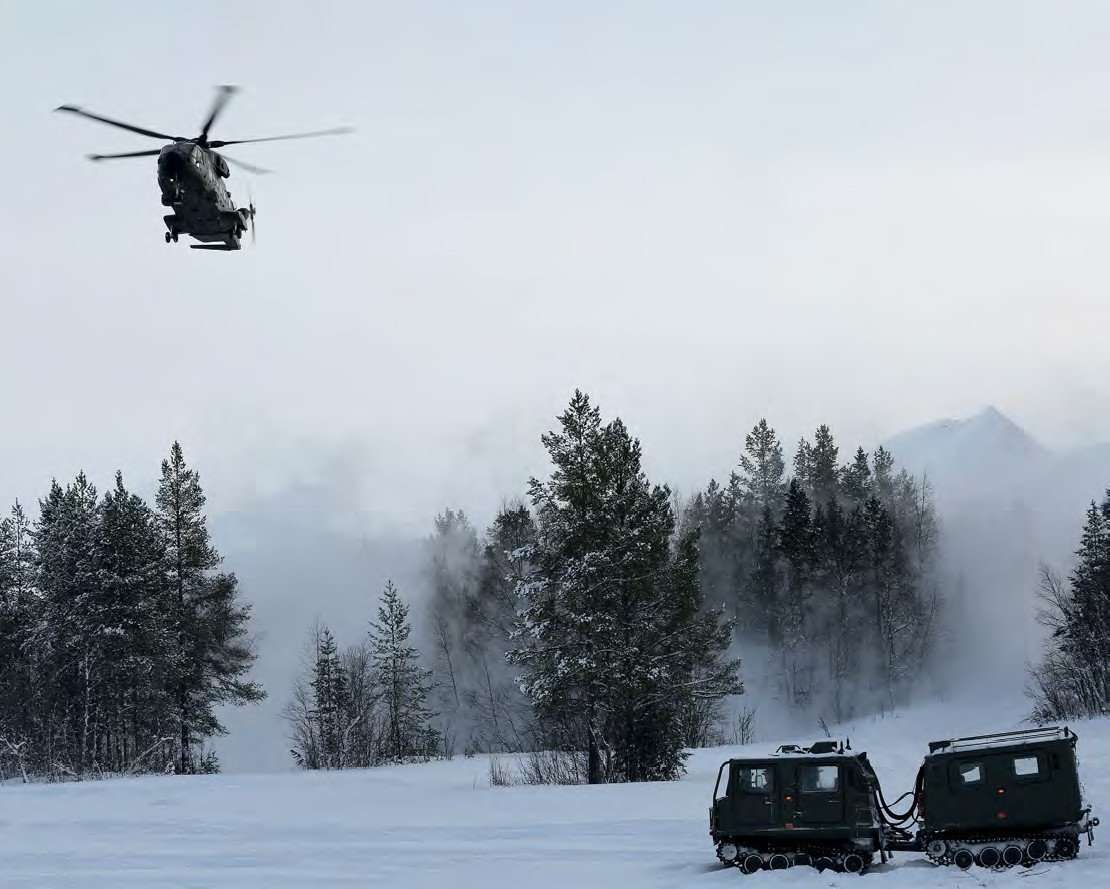 Using a Mobile Air Operations Team’s tracked, all-terrain vehicle (a Bandvagn 206) as a reference point, a Merlin HC3A prepares to conduct a confined landing amongst trees. As the recirculating snow builds behind the aircraft, aircrew have to work hard to safely position the aircraft; if aircrew lose their reference points, the landing is aborted for a go around. 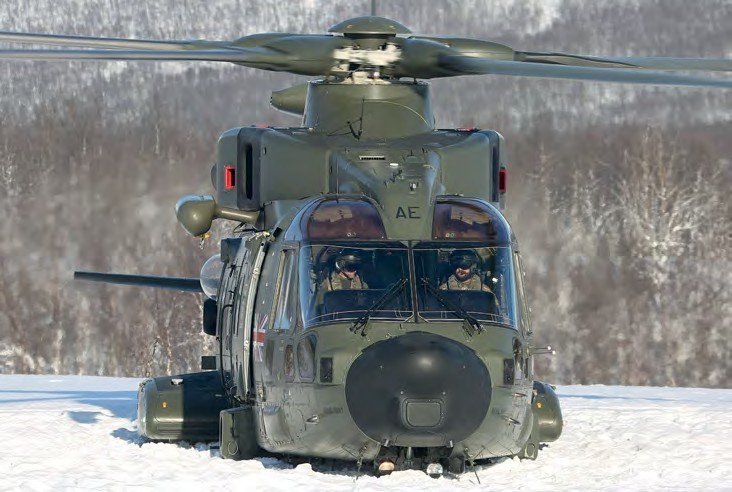 847 NAS deployment was extended to ten weeks to ensure sufficient time to complete important tactical training once EQ were achieved, as Major Ian Moore, Commanding Officer, 847 NAS, confirmed: “It’s [an often repeated] mantra that if you can operate in the Arctic you can operate anywhere; it is one of the harshest environments on earth.

Our principal aim was to complete our EQ, which will position us well for Cold Response 2020, and then to train to fight the aircraft. We achieved both objectives. We were specifically tasked by JHC to conduct AH/RH [Attack Helicopter/Reconnaissance Helicopter] teaming, which we achieved soon after we arrived. Our joint training culminated in Wildcat laser designation of Apache live 30mm gunfire on the Setermoen range. The results of this teaming were excellent, with the Apache commander confirming it worked beautifully.” 845 NAS self-deployed from Yeovilton with three Merlin HC3As from mid-February during the second training period.

Interoperability with the Luftforsvaret (Royal Norwegian Air Force) and the based 139 Wing, which includes 337 Skvadron (Squadron) NH90 NFH (NATO Frigate Helicopter) and 339 Skvadron (Bell 412HP), is considered so important the then UK Secretary of State for Defence confirmed in 2016 that the UK should not only train in Norway but also with Norway. An established feature of Clockwork now, during this year’s iteration, Norwegian Joint Terminal Attack Controllers controlled 30mm live fire by UK Apaches on the range at Setermoen. 847 NAS Wildcats provided the laser handover to the Apaches to engage their range targets. 847 NAS Wildcats and Norwegian Bell 412s also completed two large formation mission, with each package containing four Bell 412s. During the six-ship mission, 847 NAS Wildcats provided the Norwegian Bell 412s with CAS as they extracted United States Marine Corps forces. During the five-ship mission, an 847 NAS Wildcat controlled the mortars fired by Dutch forces that were transported by Norwegian Bell 412s.

Aircrew at Clockwork confirm that conducting cold weather survival training and completing their Arctic flying qualification provides them with some of the most exciting and challenging training opportunities of their careers. There is no better place on earth to train and this will continue, so good is the relationship between Norway and the UK. After 50 years, British forces are very much part of the fabric of Bardufoss and the local community, which is good news, considering nations such as the Netherlands, Germany, Belgium and United States are moving into the region and seeking to expand their interoperability with Norway and their armed forces.