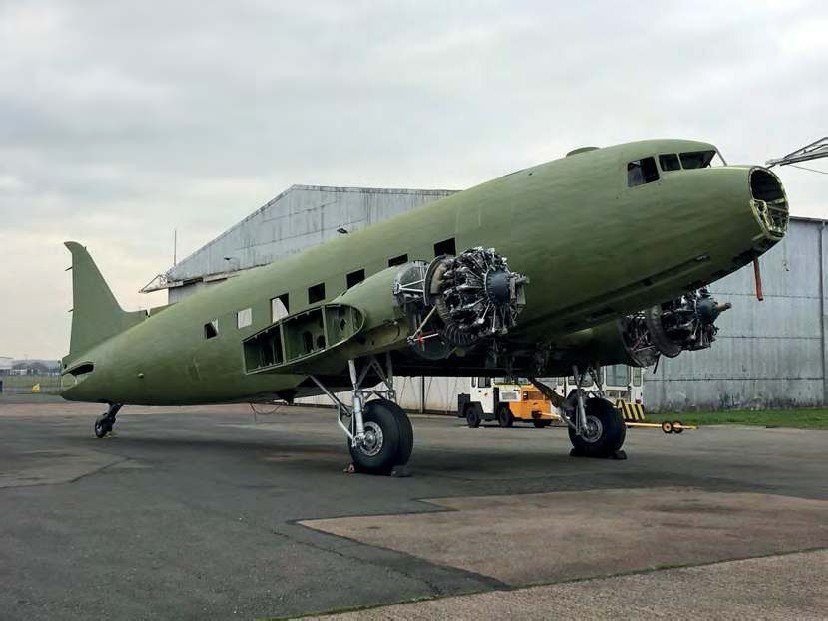 Following the fitting of engines and undercarriage, C-47A Skytrain Night Fright was rolled out of Hangar 6 at Coventry for pictures on 12 December.
CHARLIE WALKER

The project to get D-Day veteran Douglas C-47A Skytrain 42-100521/ N308SF Night Fright airworthy for the D-Day 75th anniversary commemorations in Normandy during June of this year reached a major milestone in Hangar 6 at Coventry Airport, Warwickshire, in early December with the installation of the aircraft’s undercarriage, and its two overhauled Pratt & Whitney R-1830 Twin Wasp engines.

The team of 10 men at Heritage Air Services is led by Ben Cox, who gained many years of experience working on DC-3s with Air Atlantique at Coventry. The aircraft is owned by commercial pilot Charlie Walker. His family’s firm, Walker Logistics, owns Membury airfield near Hungerford, Berkshire, from where Night Fright — then in service with the 79th Troop Carrier Squadron, part of the 9th Air Force’s 436th Troop Carrier Group — took offat 23.00hrs on 5 June 1944, heading for Normandy. The machine is destined to be based at Membury, where a Troop Carrier Museum will be established.

The historic C-47 was moved as surface transport from Shell Creek, Florida to Coventry during the summer of 2017. Charlie Walker says, “The wings that came with the aircraft had some corrosion, and the paint on the inside was very flaky, so the team has fitted wings that Ben had in storage at Coventry to keep us on target for June. The control surfaces are away being covered. The cockpit is currently stripped out, and the avionics will start to go in during January.”