A Royal Air Force Typhoon FGR4 arrives to receive fuel from a US Air Force KC-10 Extender during a mission in support of Operation Inherent Resolve. Air-to-ground missions against a fleeting enemy in an urban scenario demand the fastest and most reliable flow of communications to ensure the correct target is hit – at the right time.
USAF/Staff Sgt Trevor T McBride 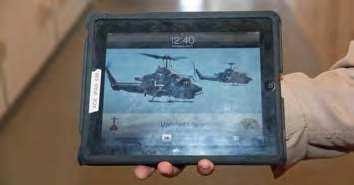 ‘Semper FiPad’. The well-known electronic tablet in the hands of a US Marine Corps AH-1W pilot from Marine Light Attack Helicopter Squadron 267. One advantage of using the device rather than traditional maps is pilot ability to optimise its functions to whichever platform they are flying.
USMC/Cpl Rashaun X James

Militaries around the world love their acronyms and the area of information and data management is particularly rich in them. In the last decade or so, we have seen IW (information warfare), NEC (networkenabled capability) and NCW (network-centric warfare), to name but a few. Each has tried to evoke the simple concept of the passage of information on the battlefield, where ‘information dominance’ is seen as the key to victory in increasingly complex and contested scenarios. But rather than each one heralding a quantum shift in performance, the reason the acronym has had to be constantly reinvented is to reinvigorate the concept when reality fails to meet the vision.