In early February, the 14th and last rotation of Royal Australian Air Force (RAAF) airborne early warning and control (AEW&C) crews completed their mission in support of coalition airstrikes in the Middle East.

Flying the Boeing E-7A Wedgetail, the crews of 2 Squadron first deployed to the Middle East in September 2014 as part of an organic Australian Air Task Group (ATG), which also included F/A-18F Super Hornet strike fighters and a single KC-30A tanker under Operation Okra. Although the more recent rotations alternated between an E-7A and KC-30A as the coalition air effort drew down, the Wedgetail recorded a mission success rate of around 95% for the four and a half years of operations.

Largely due to the Wedgetail’s high availability rate, but also because of the utility of its primary sensor, the Northrop Grumman multirole electronically scanned array (MESA) radar, the aircraft was often referred to as the AEW&C of choice by its crews in the Middle East Area of Operations (MEAO).

Anecdotally its first mission over Iraq was a solo effort after the coalition Boeing E-3 Sentry it was supposed to be shadowing to gain experience became unserviceable. According to Wedgetail crews this set the scene for the following years and senior RAAF officers deployed to the region have noted it takes three Sentries to fill one line of AEW&C tasking, due to their dwindling serviceability rates.

Named after an Australian species of Eagle, the Boeing E-7A Wedgetail is a derivative of the commercial 737-700 Increased Gross Weight (IGW) aircraft, with the MESA radar as its primary sensor.

Six aircraft were acquired under Project Air 5077 Phase 3, with selection of the 737/ MESA combination made in 1999, beating competing proposals from Lockheed Martin (C-130J Hercules/APS-145 radar) and Raytheon E-Systems (Airbus A310/Elta radar). The first two aircraft were converted from a ‘green’ commercial 737-700IGW (the same baseline aircraft as the initial version of the Boeing Business Jet, or BBJ1) by Boeing in Seattle, but the remainder were modified by Boeing Defence Australia (BDA) at its facility at RAAF Base Amberley in Queensland.

The first aircraft made its maiden flight in the United States in May 2004, but early testing revealed significant deficiencies in radar performance and the Wedgetail had a long and troubled introduction into service, being placed on the Australian Government’s defence ‘Projects of Concern’ list, until solutions were found.

Most recently the aircraft has been selected by the UK as a replacement for the RAF’s ageing Boeing E-3D Sentry AEW1 aircraft, with Britain’s Defence Secretary Gavin Williamson announcing a decision to acquire five aircraft on March 22, 2019.

One Wedgetail departed Australia as part of the Australian ATG in September 2014 and flew its initial mission into Iraqi airspace just a few days after arriving in the United Arab Emirates. By the time that FOC was declared the following May, the Wedgetail had already flown in excess of 100 missions and clocked up 1,200 flying hours in combat.

In November 2015, one Wedgetail set a new record by flying a surveillance and control mission over Syria and Iraq which exceeded 17 hours, due to the unavailability of its E-3 relief aircraft.

Normal missions were around the 12 – 13 hours’ duration, including the transit into the airspace from and to the Wedgetail’s base in the UAE, but the mission in question lasted 17.1 hours.

Speaking after the flight, the aircraft captain, who could not be named for security reasons, said: “Our mission on the day was to fly a surveillance pattern over Iraq and Syria to assist coalition strike aircraft to target Islamic State forces on the ground. A mission of this type would normally last around 13 hours, which is quite a long time to be continuously working.”

The pilot added: “On this occasion though, as we approached our return time and already well into the night, we were asked to continue on for a few hours longer, so we took on more fuel from a coalition air-to-air refuelling aircraft and kept flying. It wasn’t until we landed that I realised we had hit the 17.1-hour mark, a record for the E-7A.”

As the new kid on the block, Wedgetail’s presence is often requested at high-end air combat exercises such as the Red Flag, as word of its utility spreads. The aircraft is also a regular participant in Australia’s biennial Pitch Black air combat exercise. During the most recent iteration in July and August 2018, AIR International spoke with 2 Squadron personnel about their experiences.

Sqn Ldr Taylor said: “By some margin, the Wedgetail provides a world-leading, a genuinely global-class, AEW&C platform. We’ve been supporting Okra for a little over four years now and really fighting a good fight over there.”

He added: “The Wedgetail is an AEW&C surveillance platform, essentially it is the eyes and ears of the air war. It’s about providing the best situational awareness that you can in a high-end fifth generation warfight. We have a number of very experienced mission controllers and mission commanders in the back of the aircraft and it’s their job to ensure that all of the various players in the airspace are force-marshalled in a safe fashion and maintain appropriate separation distances.”

The RAAF’s six Wedgetail aircraft are based at RAAF Williamtown, north of Sydney and home to most of the air force’s tactical fighter fleet, but regular deployments are made to RAAF Base Tindal in the Northern Territory, where 2 Squadron maintains facilities, including a shelter which is able to accommodate two aircraft. 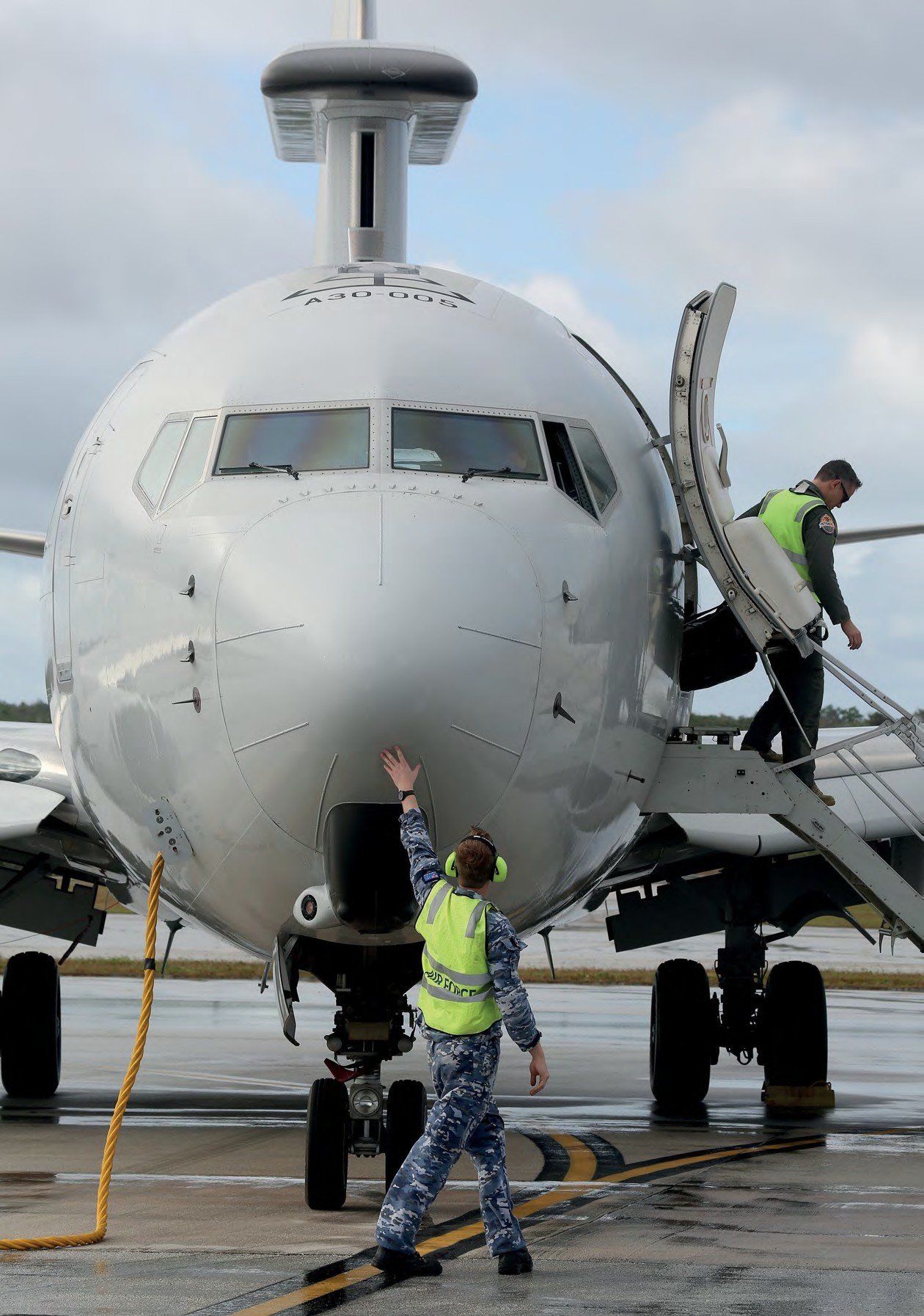 “We carry two or three pilots – if it’s a longer flight we’ll take three, so we can swap one out every now and then.” 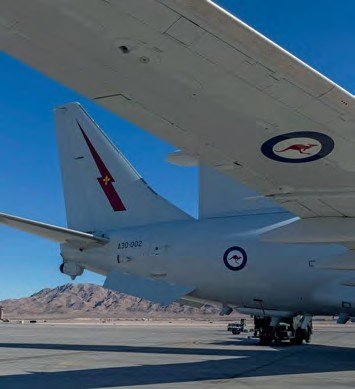 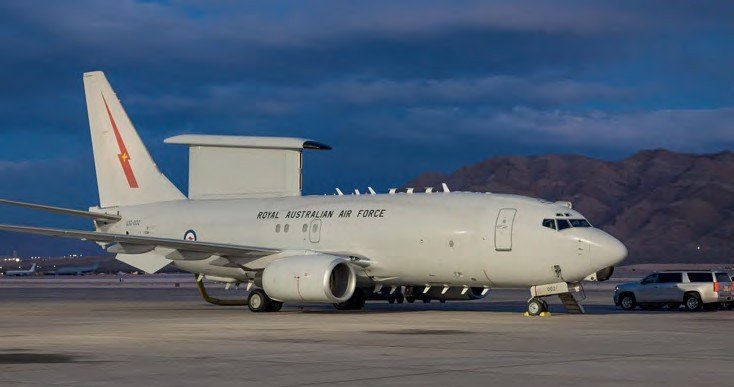 One Wedgetail was deployed to Tindal for the duration of Pitch Black, and during the large force employment phase of the exercise, Surveillance and Control Officer (SCO) Flying Officer Brodie Jones, described a typical mission to AIR International.

FO Jones said: “The ten operator consoles are all the same, so everyone will sit in a certain way, depending on what we’re doing. We generally carry one or two electronic support measures operators, who are former P-3 Orion maritime crew members and they will analyse signals for the detection of threats such as surface-to-air missiles or enemy fighters. The job we do is surveillance and battle management, so we tie all the assets in the airspace together and pass information out to them.”

FO Jones explained that at the E-7A’s typical operating altitude is 31,000 feet, where optimal radar performance is obtained. He said that the Wedgetail will be generally established in long orbits, which utilise the larger, much more powerful, side arrays of the MESA radar to the maximum amount possible, giving a radar horizon of just over 400 kilometres (216 nautical miles).

He explained: “We carry two or three pilots – if it’s a longer flight we’ll take three, so we can swap one out every now and then. Down the back we have the mission commander, who is the liaison between the front [flight deck] and back ends and he’s in charge of the whole mission.

“Then down from him, the systems officer is responsible for the operation of the radar and all our communications and datalinks, making sure they are running as they’re supposed to. Next, there’s the senior controller who looks after the team of SCOs, including myself. He is responsible for liaising with other agencies, air traffic control and ground control agencies, such as the Air Force’s Mobile Control and Reporting Unit (114 MCRU) here at Pitch Black, and also for the product that the SCOs are putting off the aircraft.”

For Operation Okra, FO Jones explained that the Wedgetail was allocated a sector of airspace, within which it was also responsible for checking other airborne assets in and out of the area and managing the rapidlychanging (aerial refuelling) tanker plan, but the Pitch Black mission set was more traditional.

He said: “We are performing the general command and control and battle management piece, where the general role is fighter control – detecting the enemy’s disposition and passing out directions from [exercise referees] White Force about how they want the exercise to run and what learning outcomes they want to achieve.” 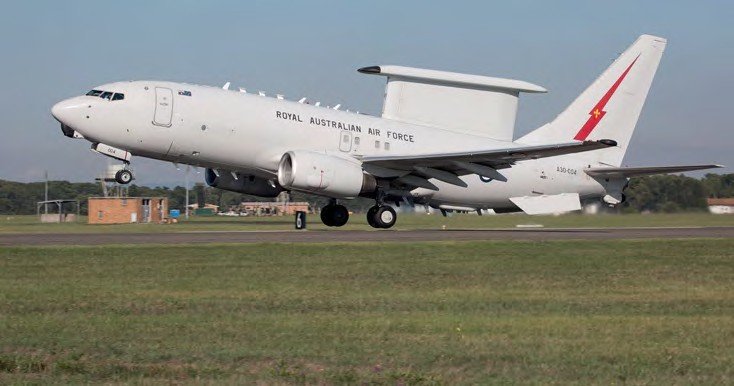 Home station ops; an E-7A takes off from RAAF Base Williamtown. The radome has a 7° pitch, measures 10.82m in length, and weighs 3.5 tonnes.
Sgt Shane Gidall/Royal Australian Air Force

During Pitch Black 18 the Wedgetail was operating for the attacking Blue Force, alongside a Gulfstream G550CAEW from the Republic of Singapore Air Force’s (RSAF’s) 111 Squadron. FO Jones continued: “Most of the Red Air control is done by the ground control agencies during this exercise, and our mission sets are largely centred around offensive counter air. We’ll generally split the airspace up into two lanes, because there’s a lot of airspace out there to actually run in, so we’ll generally take one and the Singaporeans will take the other, but we might also divide the duties and they might take a forcemarshalling role, for example.

“The scope of this exercise is the biggest training outcome for us and the different international partner we’re working with, you just can’t get that training anywhere else, where there are up to 100 jets airborne. I just don’t think you can compare to it, there’s that much talking going on and that much stuff being thrown around, it’s hard to keep track of.”

Boeing Defence Australia has been rolling out an incremental series of upgrades under Project Air 5077 Phase 5A, largely to improve interoperability and compliance, but also to address some obsolescence issues.

Systems to be added include a traffic collision avoidance system, identification friend or foe mode 5 and minor upgrades to the MESA radar. The first software release (Release 0.5) was rolled out to the fleet in 2018 and this will be followed by Release 1.0 this year. A further increment, known as Release 2.0, will add further capability, including a wideband satellite communications system to increase the flow of data able to be sent and received during a mission.

Scott Carpendale, BDA’s General Manager of ISR systems, explained: “We’re also doing some other upgrades, such as changing the displays in the operator consoles from a single display to a dual unit and integrating capabilities that we’ve previously added to the aircraft, such as IP chat, into the display rather than having a separate display. We’re also doing some mission computing upgrades to take advantage of the increased data throughput that Wideband SATCOM and other solutions provide.”

Further into the future, Project Air 5077 Phase 6 will be a comprehensive mid-life upgrade of the Wedgetail, but that is still some time away. Carpendale said: “The Australian government is going through their definition and approval processes and we’ll then get some direction as to what capabilities they want to include on the platform. We’ve already given them some support, in terms of providing different option sets, but we’re waiting for the Commonwealth to give us some guidance on the boundaries of the programme.”

While Phase 6 will be an upgrade and not a replacement of Wedgetail, the Australian government has an E-7A recapitalisation plan, known as Project Air 7001, but this is thought to be many years in the future, possibly as far out as the mid-2030s. Like its namesake therefore, Wedgetail would seem set to remain a familiar sight in Australian skies for years to come.