At the de Havilland Aircraft Museum at Salisbury Hall, re-assembly is now under way on a DH88 Comet replica that was built for the 1991 Australian TV miniseries The Great Race, a dramatised story based on the 1934 MacRobertson race from Mildenhall to Melbourne. 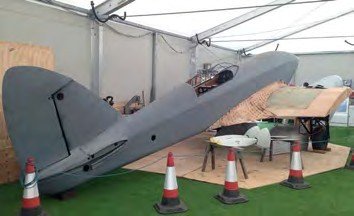 The machine appeared as G-ACSS Grosvenor House in the series, during which it was fitted with DH Gipsy Queen engines and taxied for the cameras. It is now due to be painted up in the black and gold markings of Comet G-ACSP Black Magic, which was flown by Jim Mollison and his wife Amy Johnson during the MacRobertson. On 21 October 1934, following an unscheduled refuelling stop at Jabalpur, India, during which unsuitable petrol provided by the local bus company was taken on, ‘CSP suffered a seized piston and ruptured oil line, and the aircraft was retired from the race at Allahabad.

Also under restoration at Salisbury Hall is DH53 Humming Bird J7326/G-EBQP, which during October 1925 was used for launching experiments from a trapeze fitted to the airship R-33.