Global pandemic is the aviation industry’s toughest ever challenge, but the signs are that the sector is slowly bouncing back

Throughout the Coronavirus pandemic, airlines, airports, travel companies and other industry stakeholders have shared vast quantities of information in an attempt to show how the sector is weathering its biggest ever crisis.

What has been lacking is data to reveal the bigger picture. But the air navigation service provider, EUROCONTROL has released a report, which focuses on July 29, 2020, and compares its figures to both the same day the week before and last year. 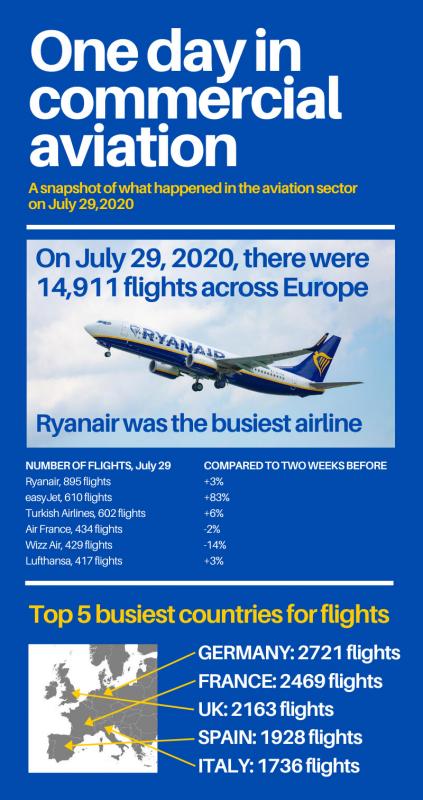 This analysis gives a good indication of where airlines, airports, nations, and market segments are positioned on their road to recovery.

On the day in question, 14,911 individual flights passed through European airspace, which equates to 42% of 2019 levels on the same day – or a rise of 5% from the week before. Since mid-July, the organisation says it has observed “significantly slower growth rates” than that at the beginning of the month, meaning that sadly the strong increase we’ve seen in recent weeks looks to have slowed.

The airline with the largest number of flights on the day of analysis was, unsurprisingly, Ryanair – the Irish low-cost carrier operated 895 services across the region. Luton-based easyJet came in second place with 610 flights, an increase of 83% compared with the previous week.

Turkish Airlines, Air France and Wizz Air followed on the list with 602, 434 and 429 flights each, respectively.

Where Are These Flights Going?

EUROCONTROL’s data shows that 12,167 services on July 29 were intra-Europe connections.

The most popular region for flights to and from the region was the Middle East, which facilitated 428 connections on the day – this was followed closely by North America, which handled 345. Asia, North Africa, Commonwealth of Independent States, Southern Africa, and the Mid and South Atlantic regions each handled 302, 217, 187, 125, and 40 connections each.

The busiest country in Europe was Germany, which processed 2,721 flights followed closely by France with 2,469 operations. The UK, Spain, and Italy each dealt with 2,163, 1,928 and 1,736 services, respectively.

It’s not just airlines that have had to cope with a reduction in air travel caused by the pandemic – some of the hardest hit have been airports. These facilities have two main revenue streams, the first being charges to the airlines for the use of the runways and terminals, and the second being income from the concession holders who operate the shops and restaurants.

Traffic is now beginning to come back to airports after reaching an all-time low value of 60,356 passengers at European facilities on April 18 – a reduction of around 99% compared to 2019 levels.

During the second half of July, the number of travellers at airports surpassed the two million mark. This, however, is still 78% of 2019 levels.

On July 29, Paris/Charles de Gaulle was the busiest airport when it handled 720 movements. This was followed by Amsterdam/Schiphol, Frankfurt, Istanbul International and Palma De Mallorca, who all facilitated 534, 527, 416, 403 flights, respectively.

Unlike most of the industry, the cargo sector has fared well during the pandemic because of its role in helping to transport PPE and medical supplies in support of health services across the world. This is why freight flights were actually up by 4% on July 29, when compared to the same date last year.

The business aviation sector has seen the smallest reduction in operations as it is down 9% from the same day in 2019. The low-cost segment has fallen 64%, while traditional/legacy carriers’ flights are down 68%.

In some respects, these figures don’t make for the grim reading that most would have anticipated.

There are now signs of recovery but because of spikes in cases and the reintroduction of travel restrictions in some countries, the growth rates that we saw at the beginning of July appears to be flattening.

The number of total flights reached 42% of 2019 levels relatively quickly, but it’s the remaining 58% that will be slower to recover as airlines navigate increasingly complex international restrictions while trying to encourage those worried about flying to step onboard.

The International Air Transport Association (IATA) has said that the global recovery will be slower than expected, with passenger numbers not returning to last year’s levels until at least 2023.

All this combined means that, despite positive signs, the road to recovery for the industry is a very long and complex one.