Countless words have been written on the exploits of Spitfire pilots, the endeavours of their groundcrew and the plans and strategies of the ‘top brass’, including previous Battle of Britain and Spitfire ‘special’ publications from FlyPast. Less appreciated is the step-by-step development of an incredible family of fighters; how the Spitfire adapted to deal with different adversaries and new tactics and how its designers reacted to the experience gleaned in combat and from emerging technologies.

Little is known about the clamour to purchase, and in some cases to licence build, Spitfires by a large number of European countries as part of rearmament to meet the threat of Hitler’s Germany. Even in its earliest days, the Spitfire was seen as a vital counter to the Messerschmitt Bf 109. Had things been different and war not broken out, it seems that Supermarine faced a very healthy export market.

When peace returned, the type was still much in demand and large orders books, for new and reconditioned examples were placed. Details of both of these market places can be found in this guide, as can a reminder of the many countries that flew Spitfires and fought within the RAF during the war. Far from ‘standing alone’, Britain was bolstered by men and women from many nations.

While some combat highlights are given in this chronological examination of the Spitfire’s evolution, we present here the incredible story of how a fighter designed in the mid-1930s could continue in production into the late 1940s and fly operationally for another decade. 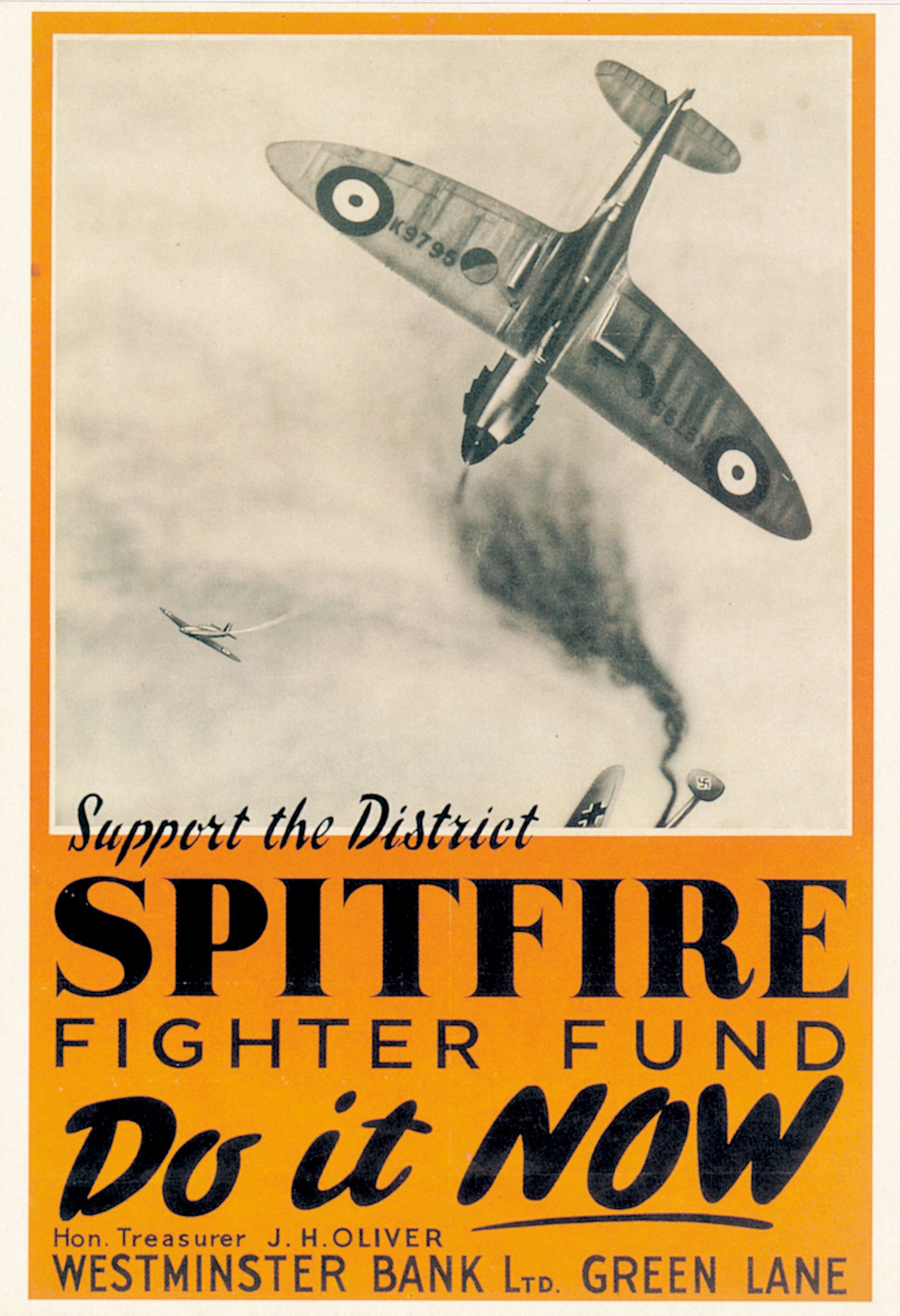 All over Great Britain, across the Commonwealth and worldwide, cities, towns and organisations raised money for the ‘Spitfire Fund’ to ‘buy’ one of the fighters for the war effort. This poster features the ninth Mk.I K9795 which was issued to 19 Squadron at Duxford on September 27, 1938. 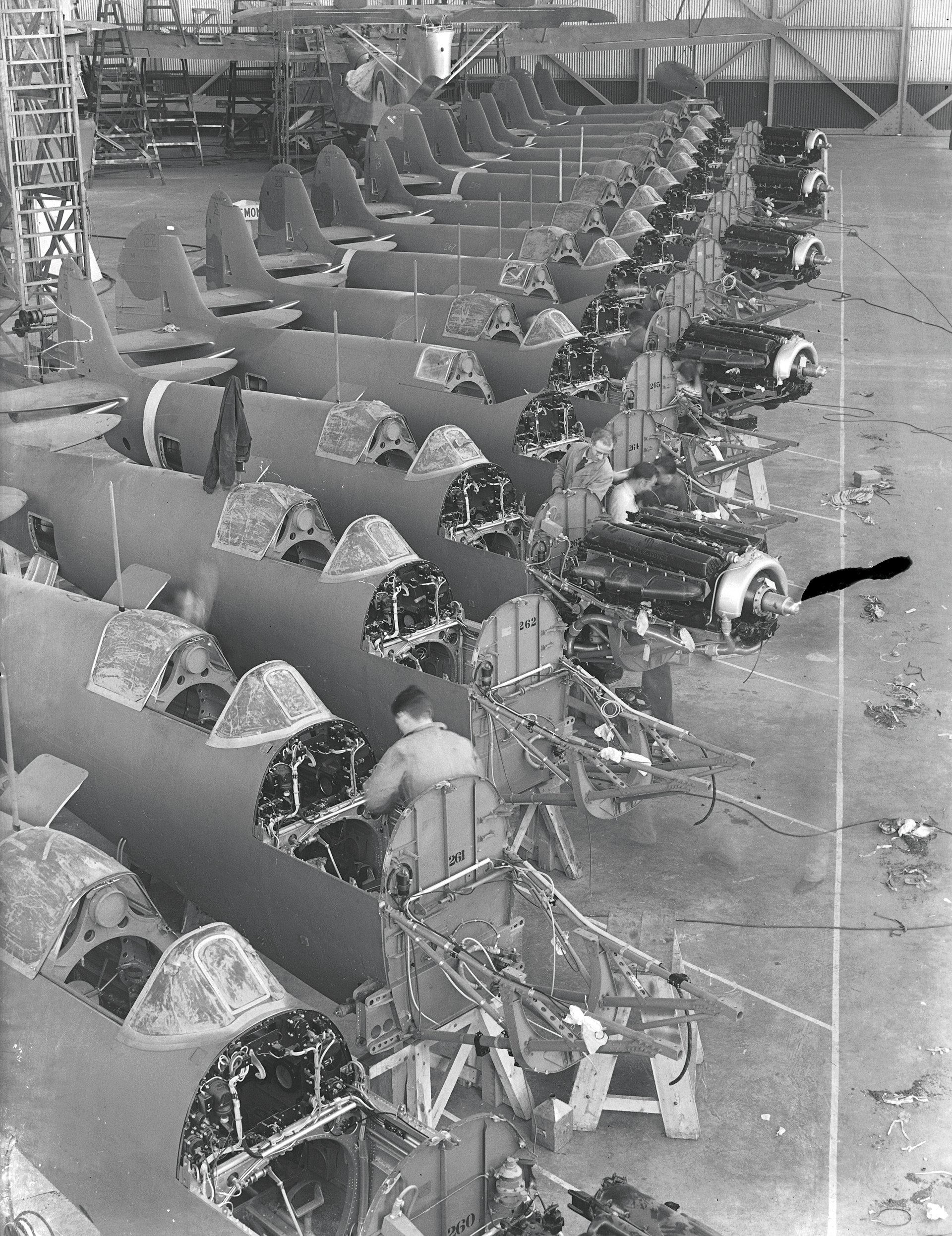 Spitfire fuselages at the Itchen works, Southampton, in 1939. In the background is a Supermarine Stranraer flying-boat. ALL KEY COLLECTION UNLESS NOTED 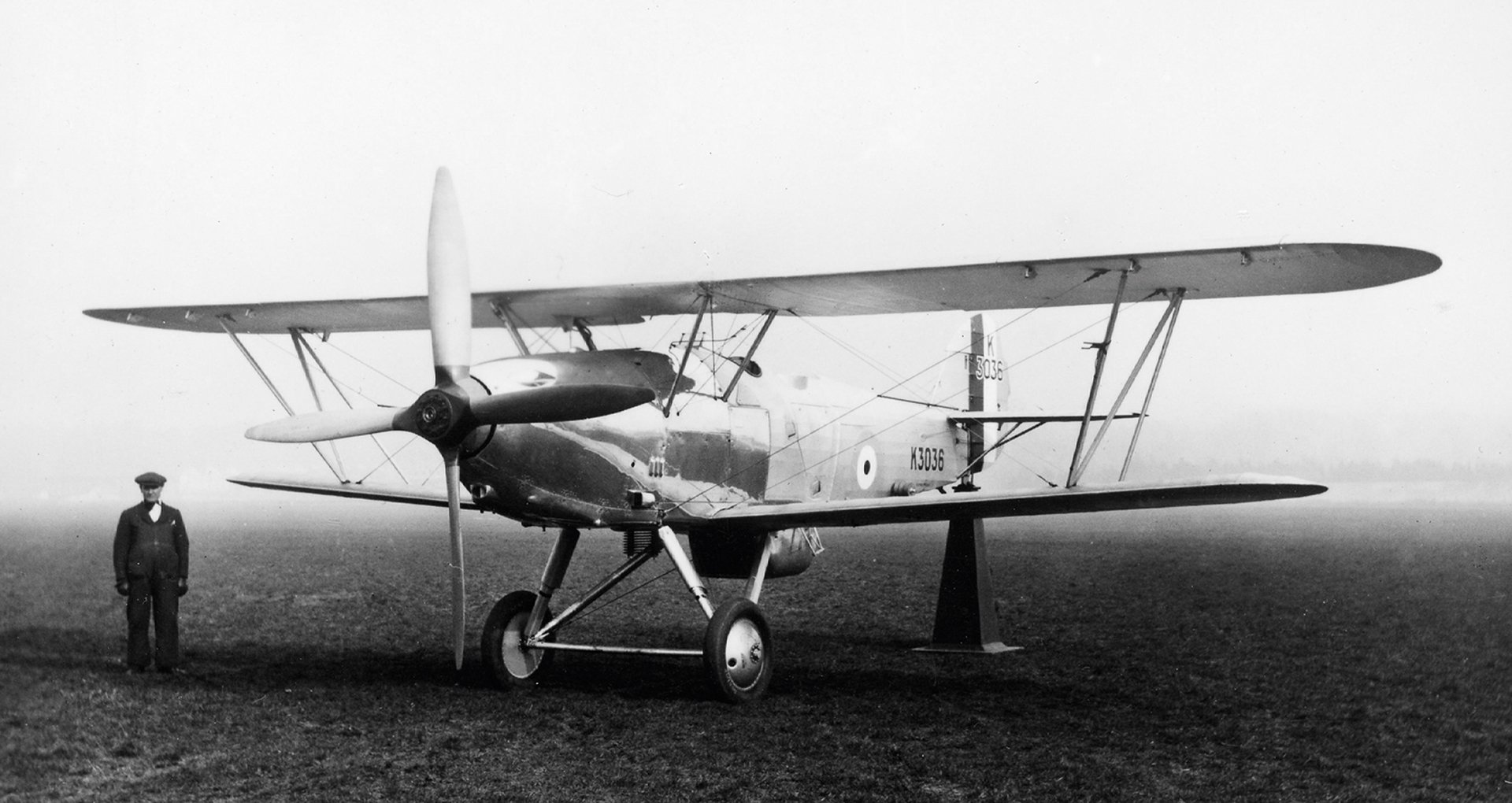 Hawker Hart K3036 served as the flying test-bed for the PV.12/Merlin. ROLLS-ROYCE

By 1938 there was a queue of countries clamouring to add Spitfires to their frontline arsenals. As the situation is Europe worsened, it fell to the Air Ministry – itself desperately trying to build squadrons for the RAF – to decide the priorities for the nations that could be allowed to take examples from the Southampton production line. France was given top priority, after which came the following, in order: Belgium*, Estonia, Turkey*, Rumania, Portugal, Switzerland*, Yugoslavia*, Netherlands*, Greece*, Bulgaria and Iran. Those countries marked with an asterisk (*) also requested licence production rights.

Others that made enquiries but did not reach the priority list, for one reason or another, were as follows: China, Egypt, Finland, Japan, Latvia, Lithuania and Poland. 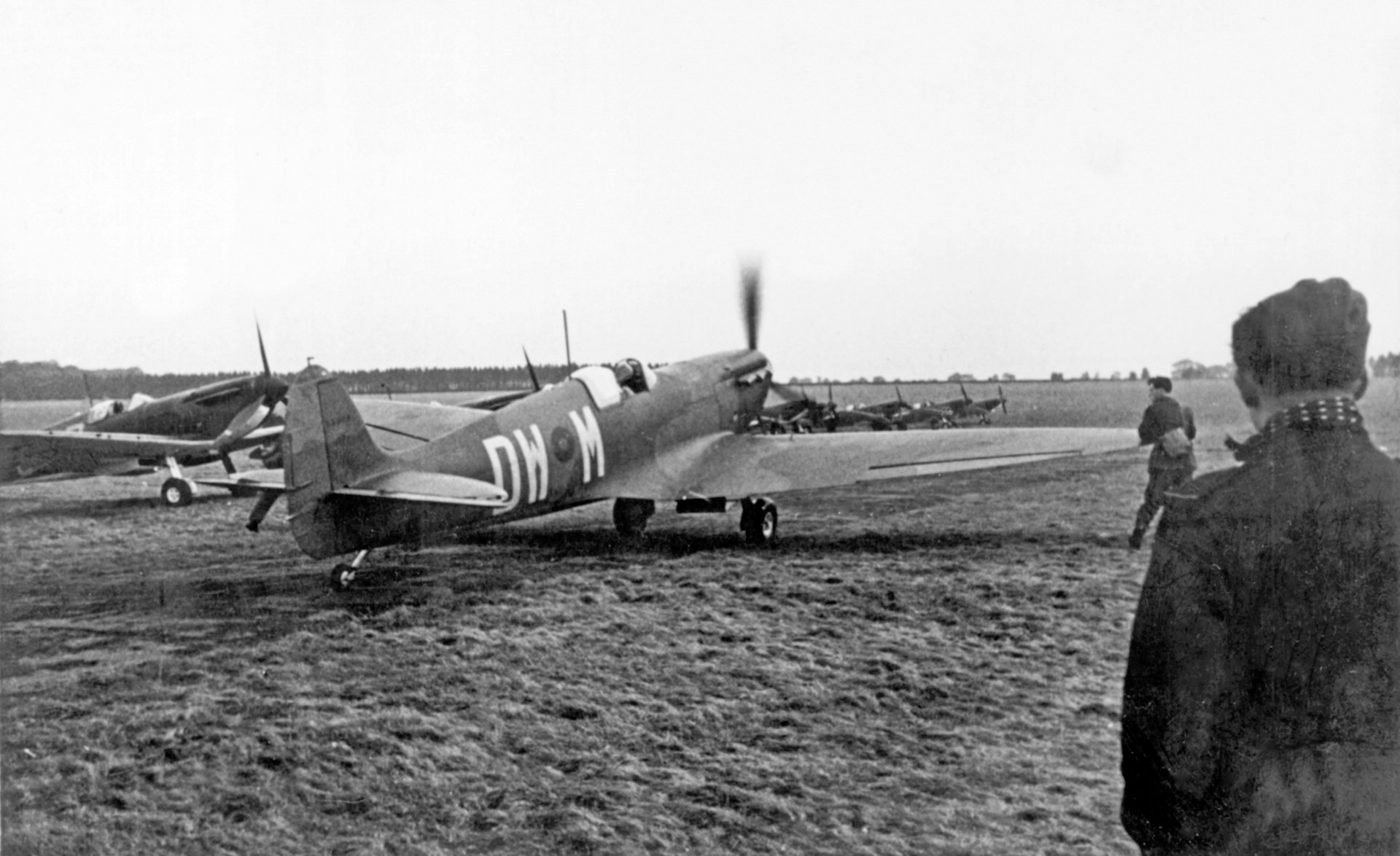 In October 1939 the Spitfire Is of 610 Squadron became operational at Wittering. The unit flew Spitfires until July 1951 when it traded its F.22s for Gloster Meteor jets. Named ‘Bombay City’ in honour of the Indian Spitfire Fund, Mk.V BM252 first served with 122 Squadron at Hornchurch in May 1942. KEC 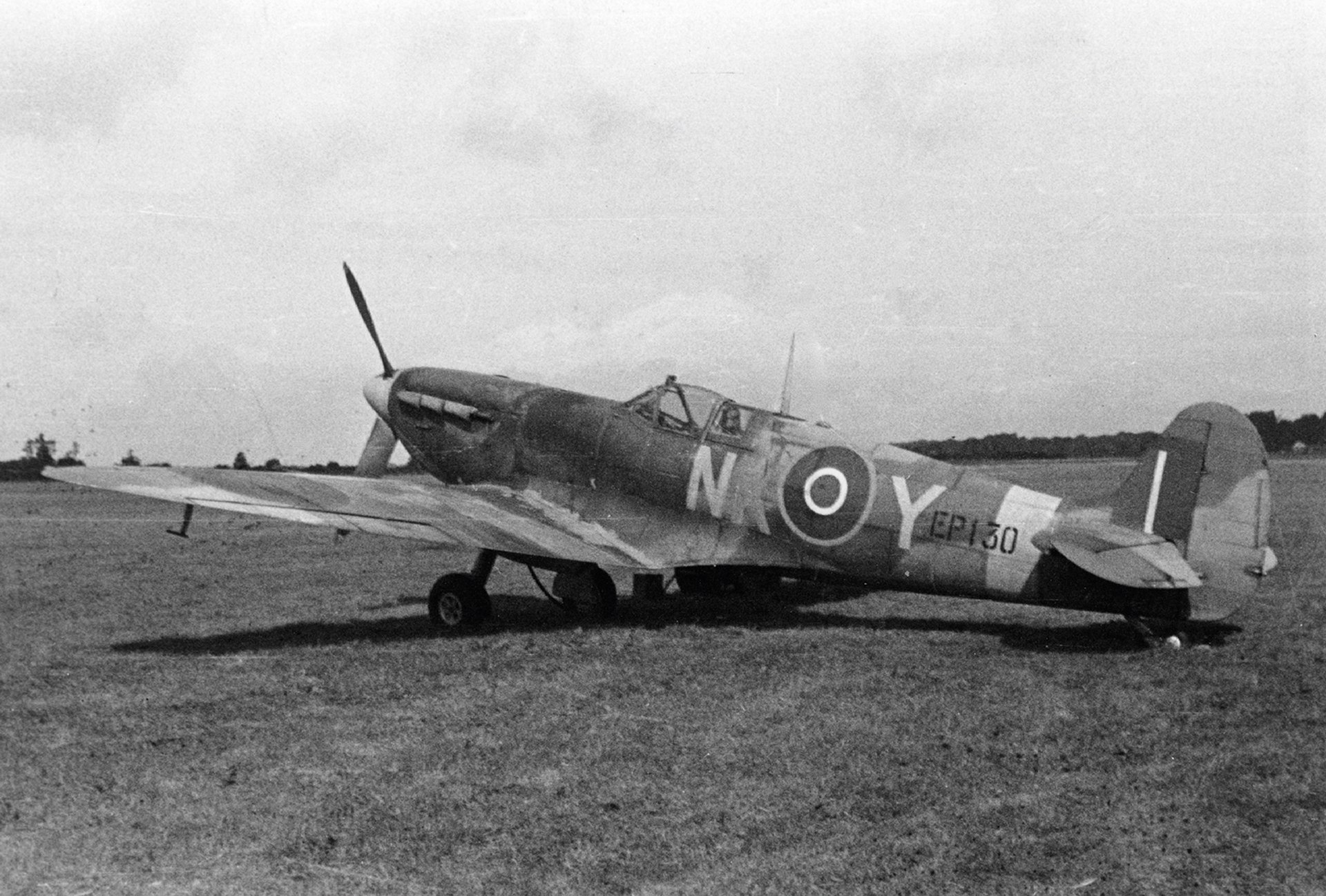 Ibsley-based 118 Squadron received Mk.V EP130 in June 1942; it only stayed with the unit until September. KEC 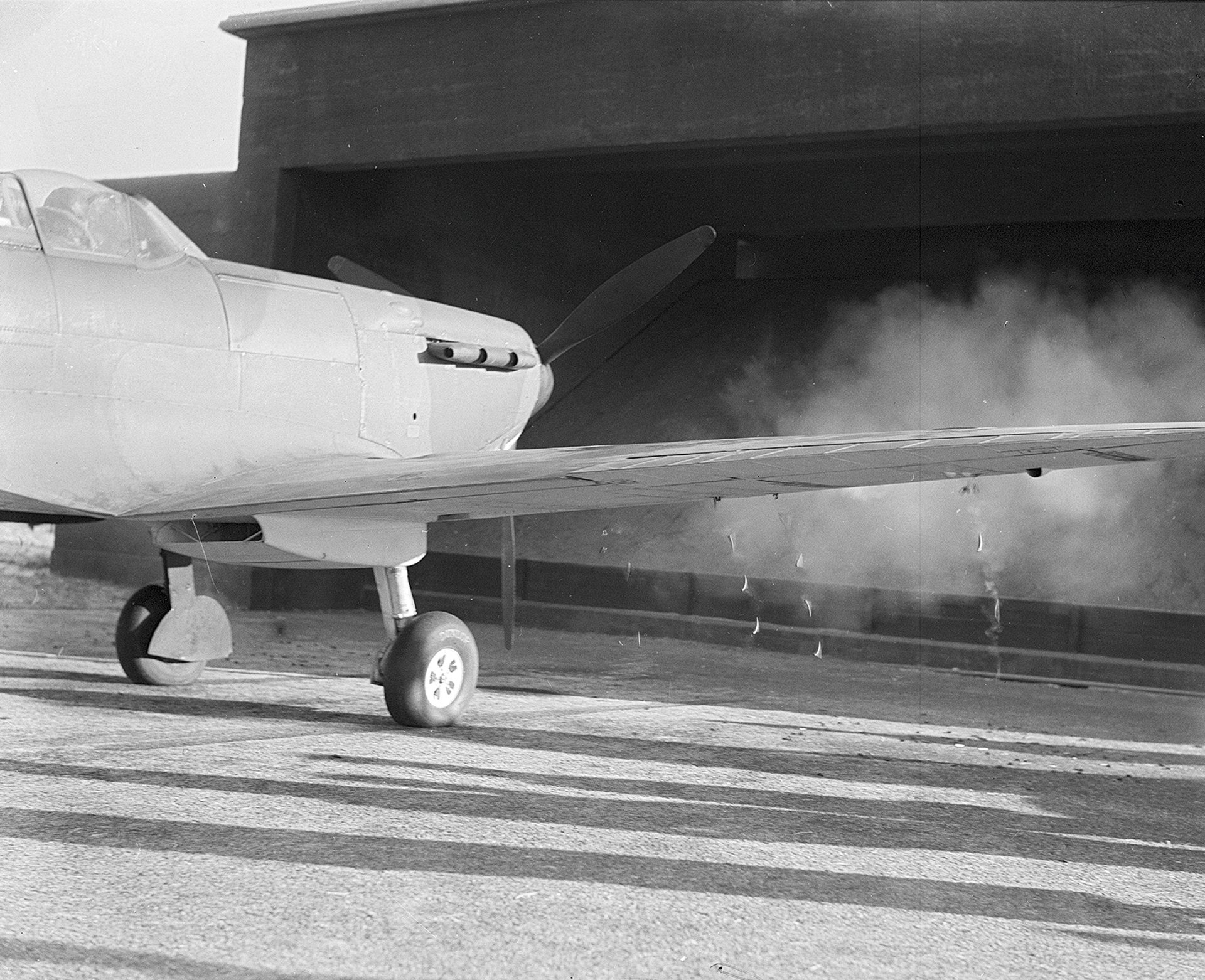 A Spitfire unleashing its firepower against the gun butts. 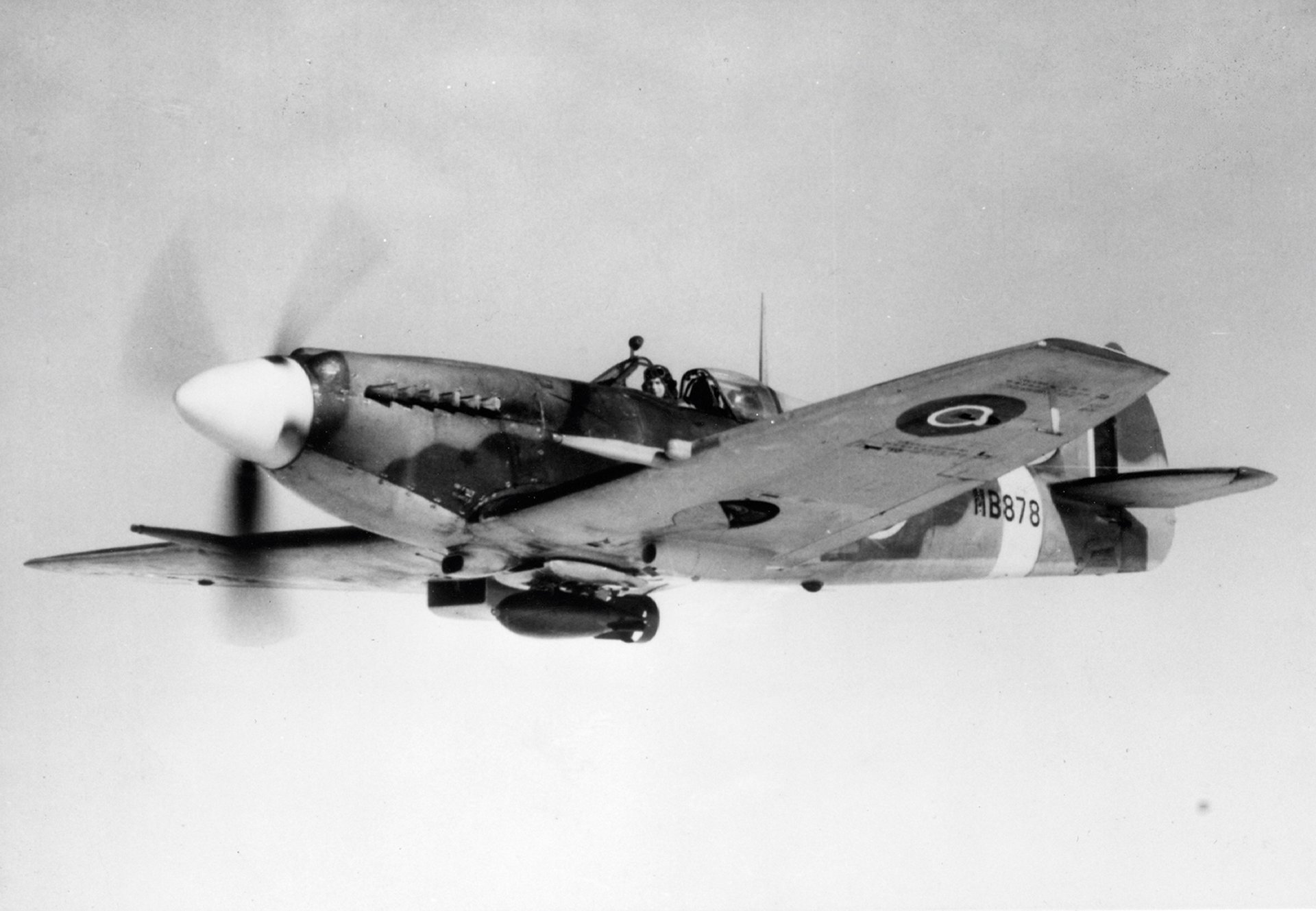 Spitfire XII MB878 was used for trials with a 500lb bomb under its centre section at Boscombe Down from September 1943. 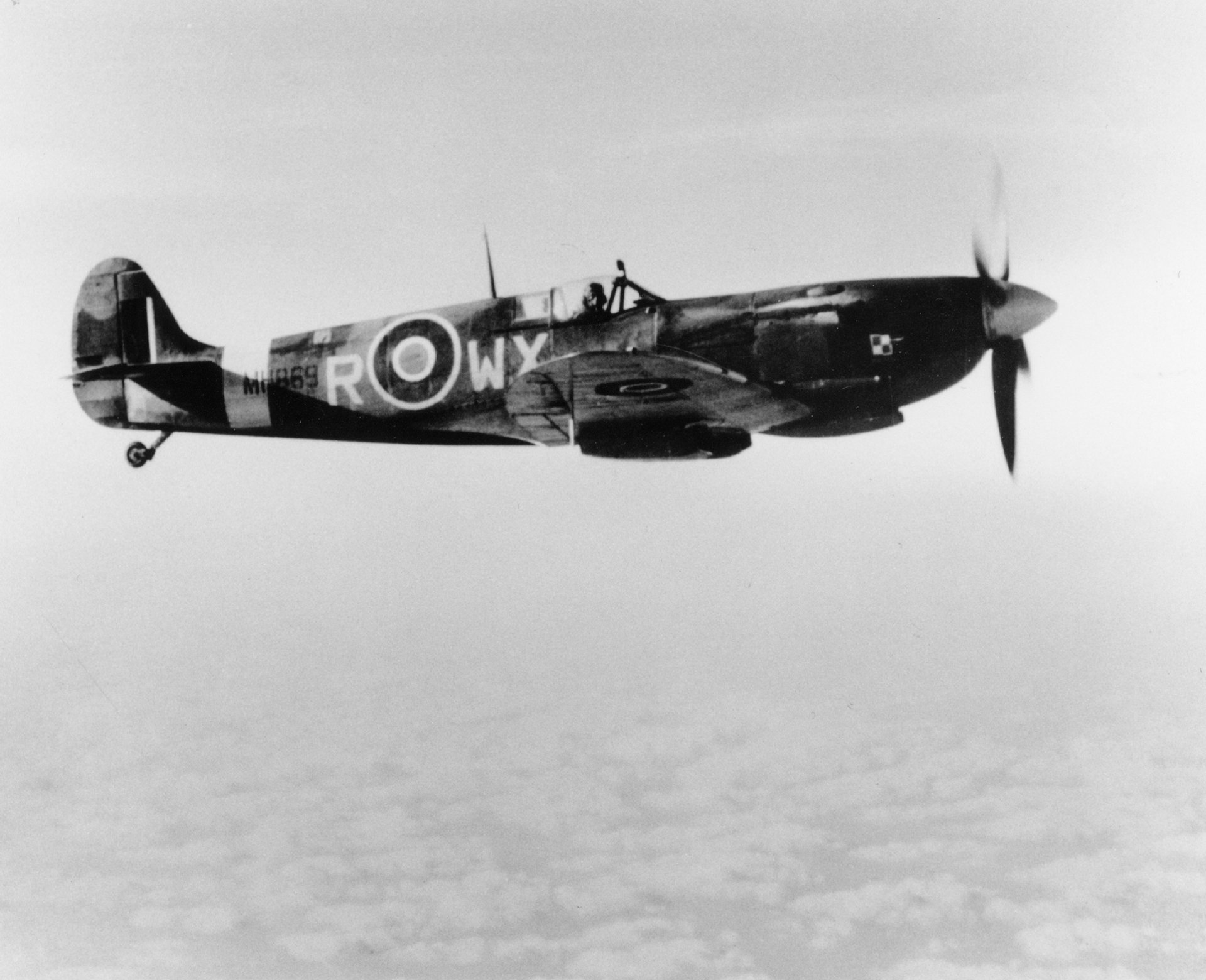 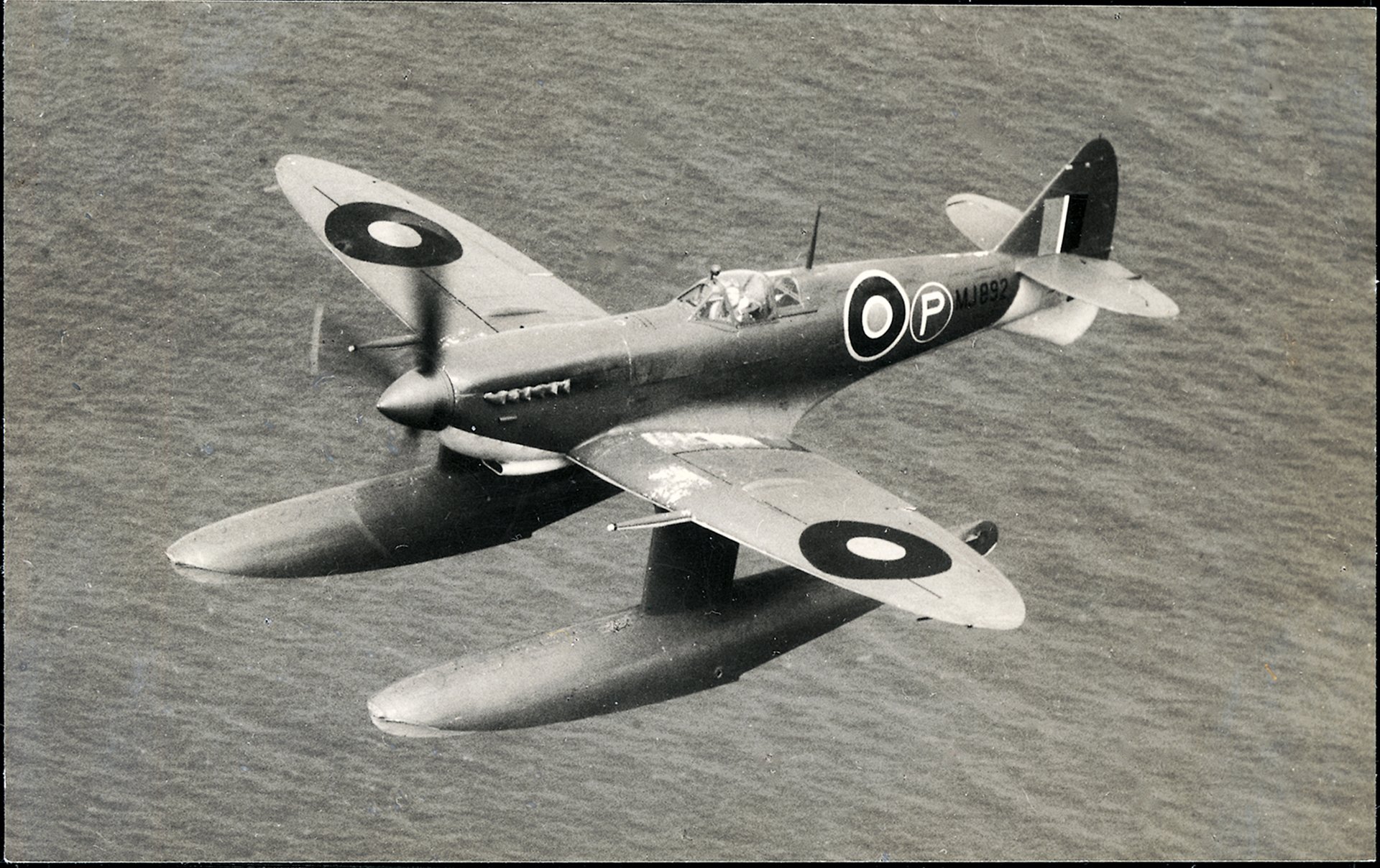 Mk.IX MJ892 was converted to a floatplane, making its first flight at Beaumaris, Anglesey,
in July 1944. A Seafire II touching down on the deck of a carrier. FLEET AIR ARM MUSEUM 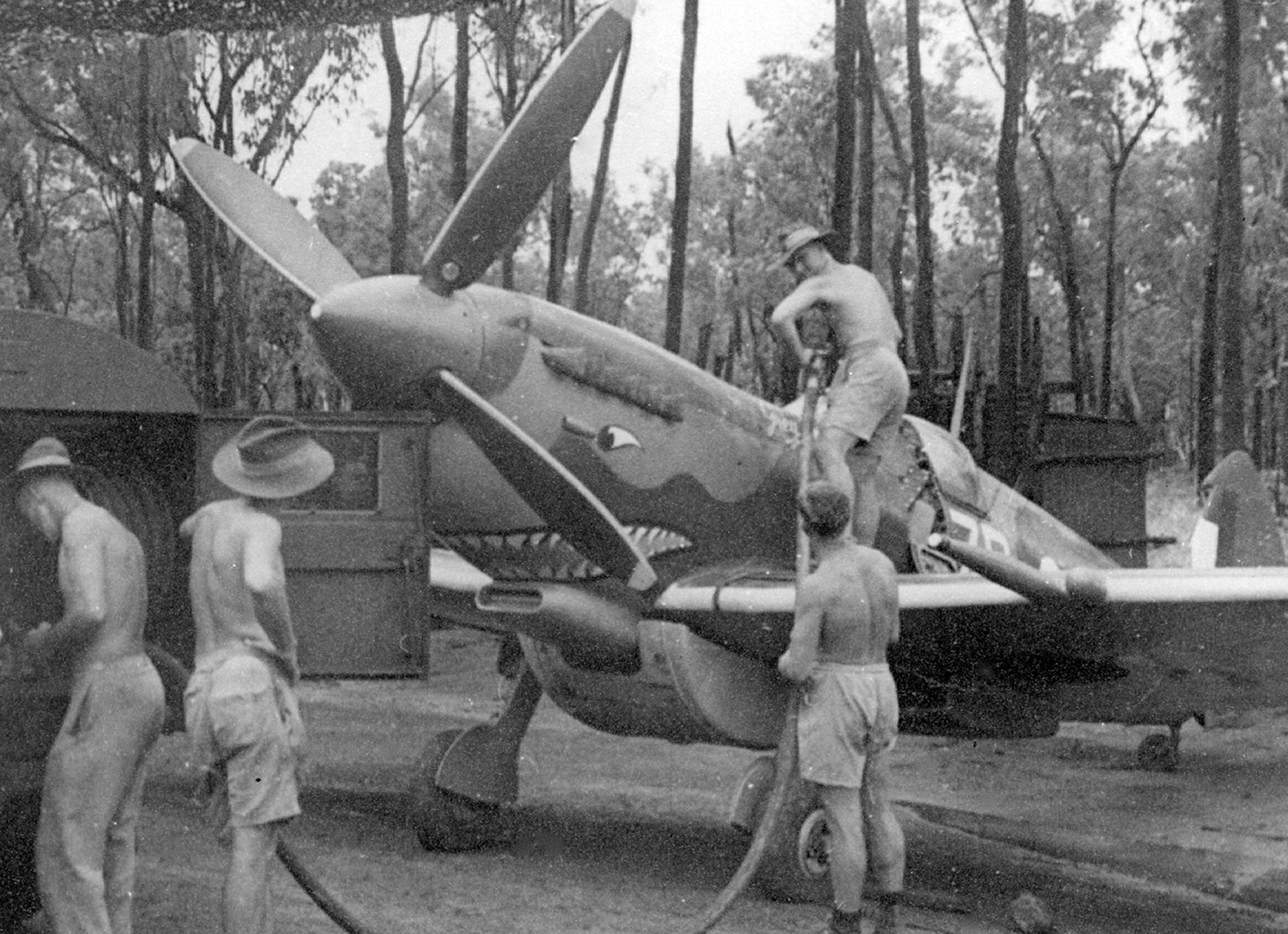 Boasting a shark’s mouth and a ‘slipper’ fuel tank, a Spitfire VIII of 457 Squadron Royal Australian Air Force at Morotai in February 1945. Spitfire V EP210 was shipped to the Soviet Union in October 1942.

To help keep the tail down when taxying out for take-off in blustery conditions, groundcrew frequently sat on the leading edge of the tailplane and took a (draughty) ride. While serving with 53 Operational Conversion Unit at Hibaldstow, Flt Lt Neil Cox DFC*, piloting Mk.V AB910, forgot a pre-flight check item. He hit the throttle before WAAF LAC Margaret Horton could ‘dismount’. She flung herself across the fin and held on for all she was worth. Cox soon appreciated that his spitfire was tail heavy and the elevator was not responsive. A gentle circuit brought Spitfire and ‘passenger’ safely back to terra firma. Castle Bromwich-built AB910 is still with us; part of the Battle of Britain Memorial Flight. Spitfire V AB910 carried a ‘passenger’ in April 1945. It went on to join the Battle of Britain Memorial Flight and is seen in the foreground of an incredible formation staged in November 1973. Behind AB910 are: Mk.II P7350, Hurricane PZ865, Hurricane LF363, Spitfire XIX PM631 and Spitfire XIX PS853. KEC