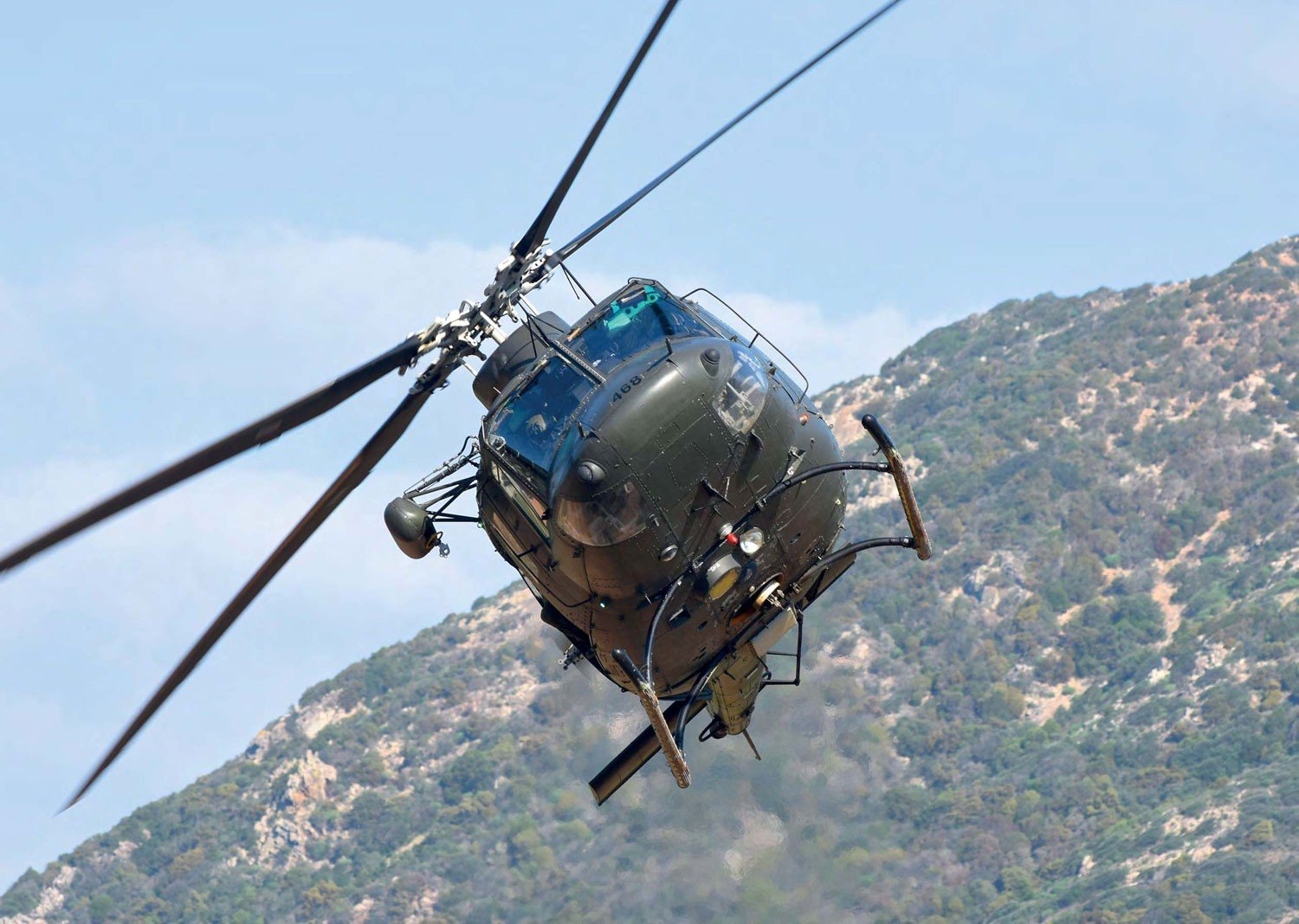 One of two Esercito Italiano Agusta-Bell 412s, or HH-412As in Italian parlance, to take part in CAEX 2018-II, MM81359/EI 468 swings around before landing.
All images by Riccardo Niccoli

Held between October 15 and 27, by the Esercito Italiano’s (Italian Army’s) Comando Aviazione dell’Esercito’s (COMAVES, or Army Aviation Command), CAEX 2018-II (Complex Aviation Exercise) is its most important training activity of the year. As its name implies, CAEX 2018-II was the second iteration of the exercise to be held this year. AVES Commander Brigadier General Paolo Riccò wants the twice-yearly pattern to continue, with each exercise held at a different location when possible.

The aim of CAEX is to train AVES units to plan and carry out crisis response operations (CRO).

It does this by mimicking scenarios similar to those faced in overseas operations, teaching standard procedures according to current doctrine and validating the units’ readiness through continuous and challenging exercises, especially in the build up to deployment. CAEX 2018-II was held to validate two task groups before their deployment overseas, and also to test the technical, logistic and operational integration capabilities in all Army Aviation mission types.

The objectives of the exercise were stated to be to improve integration in the execution of operational tasks through the planning and executing of different day and night missions, with particular attention to synchronising different air assets with the forces on the ground. Missions must be tailored to improve aircrews’ ability to operate in all-weather conditions and to improve the integration of units by the use of common procedures between AVES staff and personnel from different flying units. Lastly, the exercise is tasked with evaluating the abilities of units and commanders to respond and adapt to various threats.

Brigadier General Riccò told us: “Airmobile operations are very complex to plan and execute, Army Aviation is the only specialty that can do it.”

The theme of the exercise was the employment of a task force, reinforced with support assets as a strategic reserve, to carry out a mechanized/ airmobile medium-range operation.

The exercise was predicated on the NATO Skolkan scenario, an imaginary region located in the Baltic where a separatist group wants to gain independence of the areas populated by the fictitious Botniac majority population. For the purposes of CAEX 2018-II, Regional Command East’s Task Force Angel was called in to provide support to Estonian armed forces while they waited for the intervention of the NATO Rapid Reaction Force. The scenario incorporated elements that could lead to a serious international incident and prepared units for all eventualities they might encounter in real-world operations now and in the future. 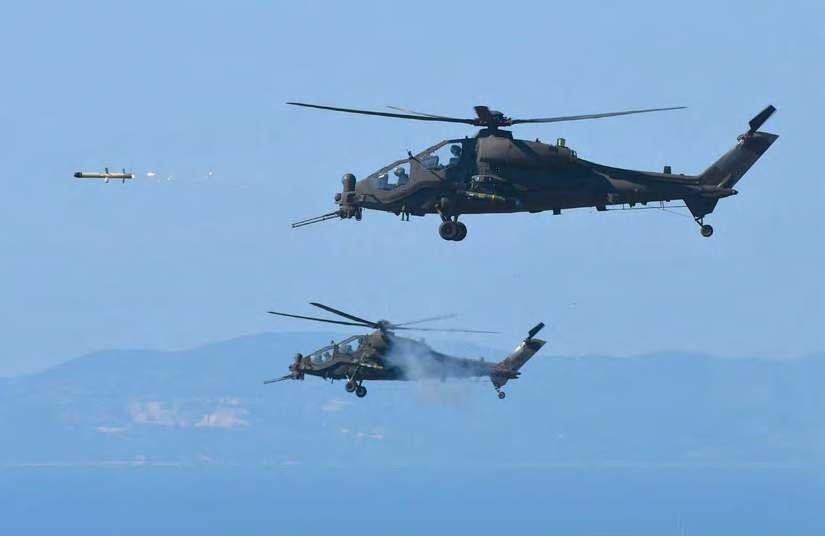 A pair of Mangustas fire cannons and rockets. 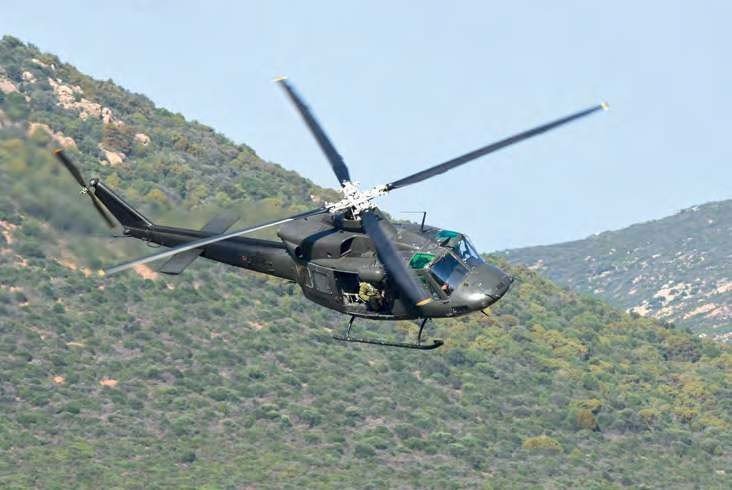 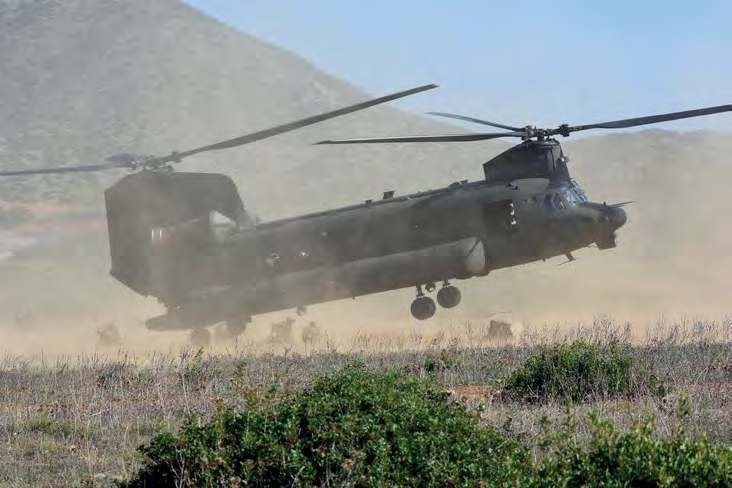 On the ground, the first part of the LIVEX was conducted in the northern part of Italy’s Lazio region, near the main operating base (MOB) at Viterbo, while later action took place in Sardinia, from Decimomannu Air Base, which served as the forward operating base (FOB), and on the Capo Teulada range. Task Force Angel comprised Task Group Alpha (core unit 1° Regiment ‘Antares’) with two AH-129Ds, one ICH-47F, one UH-205, and one parachute platoon; Task Group Bravo (core unit 5° Regiment ‘Rigel’) with two AH- 129Ds, four UH-90As, one UH-205, and one airmobile infantry platoon; Task Group Charlie (core unit 7° Regiment ‘Vega’) with two AH- 129Ds, two UH-90As, one ICH-47F, and one airborne infantry platoon. This last one also had a nucleus of mine-detecting dogs. Two more ICH-47Fs and one parachute platoon, plus support unit, were with the TF command.

To get the most out of the exercise, all personnel were equipped with the I-MILES (Multiple Integrated Laser Engagement System), used to simulate combat and record interactions with opposing parties. The Safe Strike system was used for command and control while UAV operations were simulated using RAVEN tactical unmanned systems, operated by 41° Regiment. Secure comms among those taking part were achieved by the use of SATCOM systems (STR-651P and PRC- 152) in accordance with MIL-STD-181/183 procedures and external cryptography.

The exercise scenario pretended a naval formation had arrived of the shore of Saarema West, (in reality the Capo Teulada range, in southern Sardinia), and a number of small naval vessels had been spotted by ISTAR assets sailing north-east towards the coast with a landing force. The mission assigned to TF Angel (the strategic QRF) was to carry out air mechanized actions and air assaults against the enemy formations on land, so as to stop the Botniac unit, which was at battalion strength, and allow the arrival of friendly forces. A key requirement was that the enemy’s combat efectiveness had to be cut to 50% of its original strength. Enemy armoured vehicles were engaged with Spike missiles ired by AH- 129Ds and then, exploiting operational tempo and the surprise factor, the task force attacked enemy units with an air assault.

The first phase of the QRF reaction was the insertion, via a free-fall parachute jump, of a recce platoon and a RAVEN team in the area of the landings to create two observation posts (OPs). After a few hours, TF Angel moved from its MOB at Viterbo, lying over the Tyrrhenian sea to the FOB at Decimomannu, Sardinia. The general plan foresaw the use of a FARP in the Perdasdefogu range, Sardinia, but the lack of headwinds gave the helicopter force enough endurance to ly directly to Decimomannu. Then, a second FARP was created, in a safe zone to the rear of the operational area, using one ICH-47 Fat Cow (equipped with internal auxiliary fuel tanks), escorted by two AH-129Ds. The next phase saw the air mechanized attack, carried out by three AH-129D patrols (six helicopters) armed with Spike missiles and 20mm cannons, which were supported by one mortar platoon, deployed using two UH-90A helicopters. It should be noted that using the UH-90A, the mortar platoon comprising three 81mm mortars, personnel and ammunition can be transported internally in only two helicopters. The use of 120mm mortars is no longer considered because they need three helicopters and the mortars have to be transported outside the aircraft slung from the ventral hook, which in itself reduces the speed and manoeuvrability of the helicopters. In this phase of the exercise the AH-129Ds opened ire against ixed targets at a range of about 4.5km (2.8 miles). Once the enemy assault was halted it was the turn of the air assault phase, which was carried out by Task Group Alpha and involved deploying one parachute platoon on the ground in a frontal assault on the enemy forces. Task Group Bravo then deployed an airmobile infantry platoon on the enemy’s left lank. A third phase, a heliborne assault carried out by the airborne QRF, formed by Task Group Charlie, delivered one parachute platoon on the ground. A consolidation phase followed, in which the platoons on the ground were supported with ammunition and other supplies via an airdrop performed by an ACTL-1. At the close of activity, TF Angel pulled back and returned to Viterbo, refuelling at the FARP at Perdasdefogu and reformed as the theatre strategic reserve. The kinetic attack lasted no more than an hour, and the whole operation, from takeof at the Vitebo MOB, until return to this base, lasted from dawn to sunset. It is worth noting that after all the preparation the whole day of action was carried out without any rehearsal. TF Angel lew to Viterbo on the morning of the exercise, was briefed and launched its attack without having been on the ground in the operations area before, accurately replicating expected real-world operations typical of the kind of work a QRF is designed for. 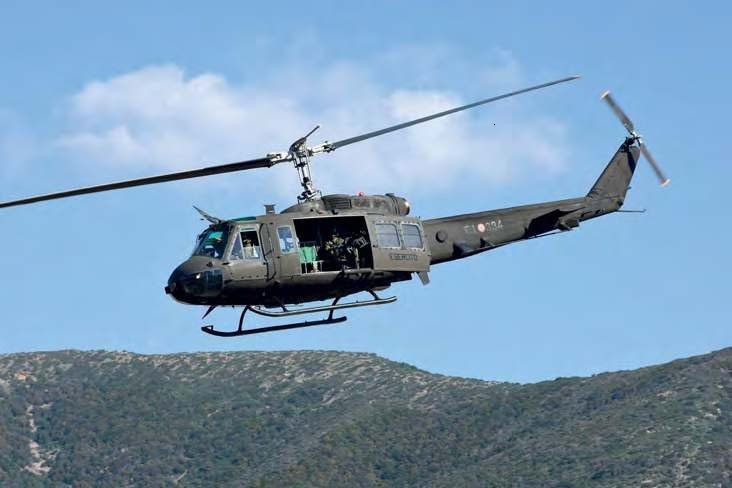 The door gunner watches the photographer as his Agusta-Bell AB205A, or UH-205 MM80705/EI 334, departs the landing zone in Sardinia. 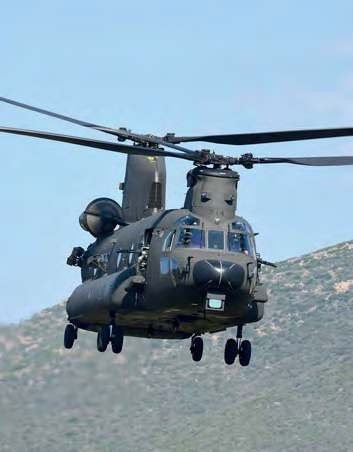 One of several nearly-new ICH-47F Chinooks that took part in the exercise. Note the M134 six-barrel rotary machine guns in the cabin doors, part of the helicopter’s self-defence system. 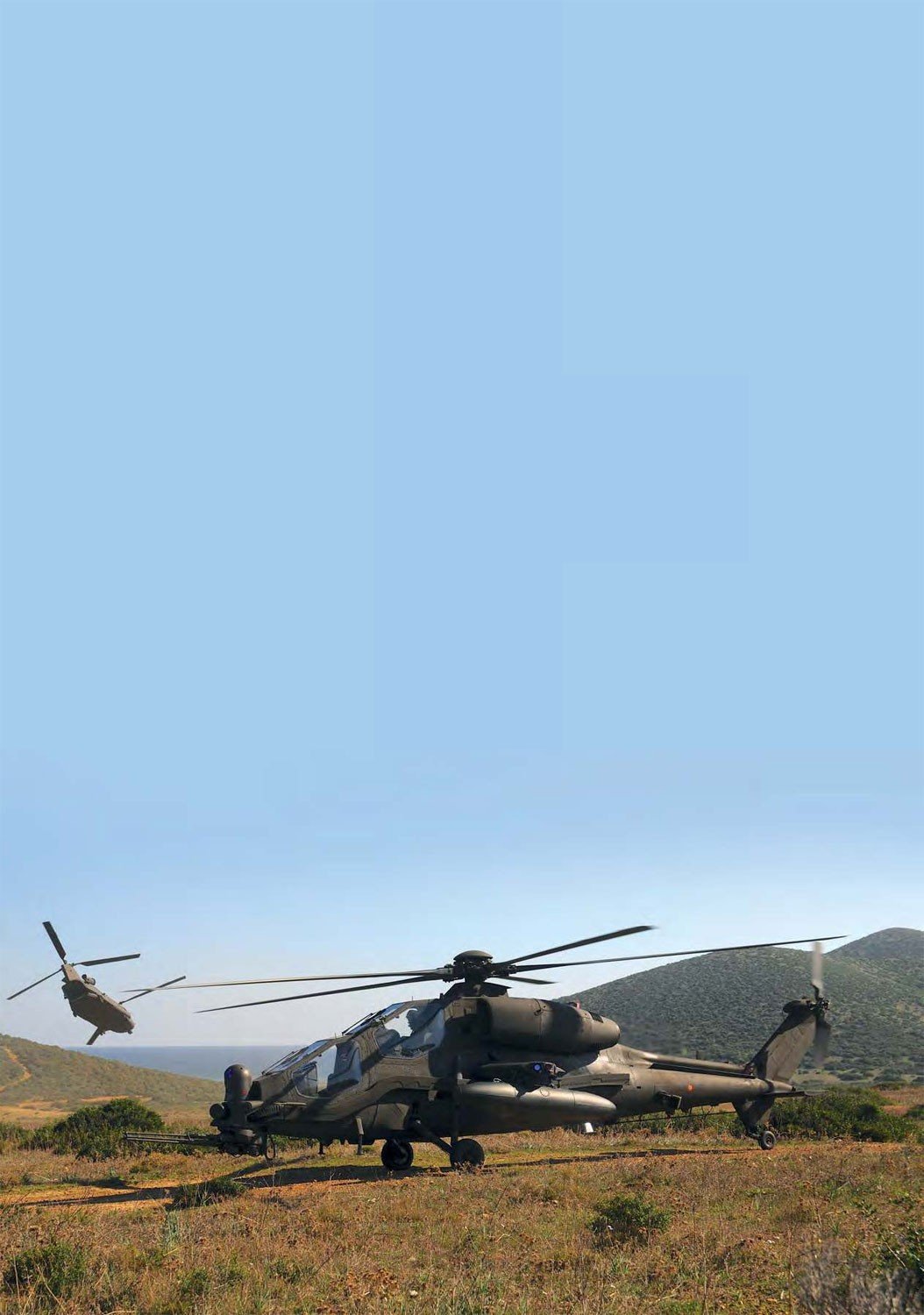 The following day a similar exercise was repeated but this time with participation of two T-346 light attack aircraft of the Aeronautica Militare operating in the close air support (CAS) role in concert with a JTAC on the ground.

Brigadier General Paolo Riccò summed up the results of this exercise in these words: “The exercise went well. There were, as I expected, minor mistakes such as engaging the wrong targets, but this is quite normal when you ire at several identical silhouette targets. In combat operations it is much more diicult to do that. The arrival of the last TG was a bit late, they arrived when the AH-129s were already out of ammunition, but in real life the Mangustas would have been loaded with full ammunition and Spikes, so would have been able to continue their action. The Spike missile is extraordinarily accurate, and the 20mm cannon ire of the Mangustas was very precise. The AH-129s performed well, they were able to engage their targets at long range. Also, live ire with the on-board M134 systems of the ICH-47Fs and UH-90As gave good results, they were used in the same ways as they would be on real operations”.

It had been planned that CAEX 2018-II would incorporate Aviation Légère de l’Armée de Terre (French Army) Tigre and NH90 helicopters, but this had to be cancelled. The COMAVES is open to other allied units, and it is probable that it will become a multinational event.