‘CONNIE’ EDWARDS 1934-2019 Warbird pilot and collector Wilson ‘Connie’ Edwards, famed as one of the lead pilots during the making of the Battle of Britain film in 1968, died in Texas on 3 May, aged 85. A full obituary will appear next month.

MI AMIGO VOLUNTEER REWARDED AT DUXFORD Eighty-two-yearold retired engineer Tony Foulds, who has for 50 years looked after a memorial to the 10-man crew of B-17G Mi Amigo who died in a crash in Sheffield’s Endcliffe Park on 22 February 1944, received a well-deserved taxi ride around Duxford in B-17 Sally B on 27 MaySally on 27 May, US Memorial Day. Tony is pictured at the Cambridge American Cemetery at Madingley that same day.

SWISS ‘CONNIE’ OPERATOR FOLDS On 29 April, the Basel-based Super Constellation Flyers Association announced that it had been unable to raise the 20 million Swiss francs needed to repair the wings of its L-1049G Super Constellation, HB-RSC Star of Switzerland, and that the decision has been taken to liquidate the association. In a statement, it said, “Over the coming weeks and months, we will decide what the future will hold for the Star of Switzerland. The board will do everything in their power to continue to allow the public access to the ‘Connie’ in the future.” BEN DUNNELL

WESSEX ARRIVES IN WALES Westland Wessex HAS3 XM833 arrived at the South Wales Aviation Museum at St Athan in late May for restoration, having previously been with the North-East Land Sea and Air Museum at Sunderland. 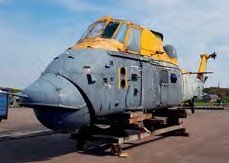