A memorial to the seven crew of a Handley Page Halifax that crashed into a hangar at RAF Tangmere on 19 November 1943 was unveiled at the site of the accident, close to the control tower, on 16 August.

The No 10 Squadron Halifax IIa, HX181/ZA-K, based at RAF Melbourne, Yorkshire, had been severely damaged during a raid on the IG Farben chemical plant in Leverkusen, Germany. An attempt had already been made to land at Ford, but the runway was blocked by a Boeing B-17 Flying Fortress that had made an emergency landing, so HX181 continued on to Tangmere. According to contemporary reports from eyewitnesses, it is thought that the pilot, 23-year-old Flt Sgt Ben Holdsworth, may have been incapacitated and that another member of the crew was trying to land the aircraft. 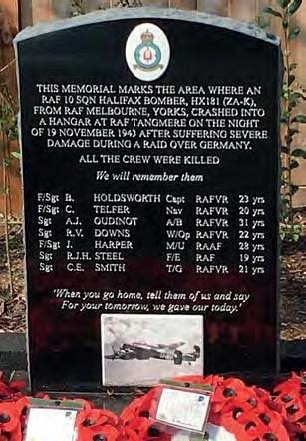 The newly unveiled memorial to the crew of Halifax HX181 at Tangmere. TONY HARMSWORTH

The driving force behind the erection of the new memorial at Tangmere has been Aly Etherington, greatniece of the bomb aimer who died in HX181, Sgt Jim Oudinot. She says, “We have three eyewitness accounts, and all independently stated they thought that either the pilot had been killed or was severely injured. This might also account for the fact that the crew did not bail out, choosing instead to stay with the pilot and the stricken aircraft.”

The secretary of the Tangmere Military Aviation Museum, Joyce Warren, was nine at the time of the accident, and says, “I lived in Tangmere village. In those days you weren’t told anything. We heard these terrific explosions and were ordered to get into out shelter and laid there listening to it more or less all night.”