With an upgraded passenger cabin to debut this year, the CRJ remains key to Bombardier’s product range. Mark Broadbent reports 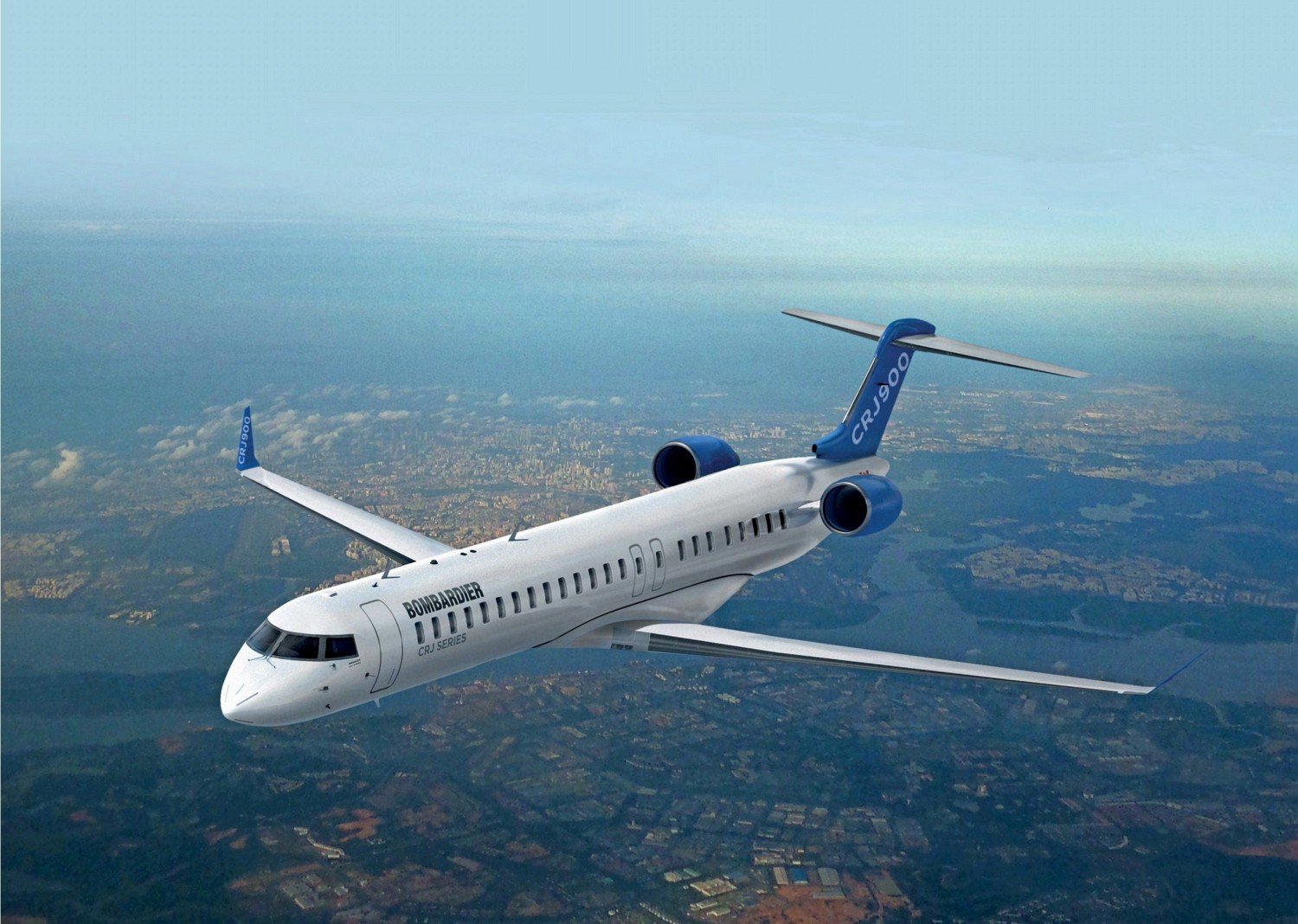 The bulk of current-production CRJ sales have been the CRJ900, with 444 examples of the variant ordered by the end of last year.
All photos Bombardier Commercial Aircraft

The Bombardier CRJ is one of the most popular commercial airliners ever made; only the Boeing 737 and Airbus A320 programmes have sold more.

Since launching the CRJ in 1987, the Canadian company has sold 1,918 examples of the regional jet family, of which 1,876 had been delivered by December 31, 2017, the latest date for which figures are available. The company says a CRJ takes off or lands every five seconds and there are more than 200,000 flights with the type every month.

The C Series is Bombardier’s flagship airliner programme today, but with the CRJ such an established product it is unsurprising the company maintains a large commitment to its regional jet range and continues to invest in the three current-production models, the 66-78-seat CRJ700, the 76-90- seat CRJ900 and the 97-104-seat CRJ1000, and support the older out-of-production CRJ100, CRJ200 and CRJ440 variants.

This year Bombardier will introduce a major cabin upgrade for the CRJ called Atmosphere. The first aircraft featuring the revamped interior will be delivered to its customer, currently undisclosed, in the second half of 2018.

Jean-Francois Guay, the director of the CRJ programme at Bombardier Commercial Aircraft, told AIR International the stimulus for introducing Atmosphere was a roadshow in 2015: “We surveyed the market to understand what they’d like to improve or what, if they were planning to buy a CRJ, they’d like to see. The thing that came out was the interior.”

A key finding was a desire from airlines for increased space in the cabin. Consequently, Bombardier has redesigned the entrance area in the forward cabin and introduced wider seats (20in/508mm in business class, 17.3in/439mm in economy) and larger overhead baggage bins designed to handle rolling bags sized up to 23 x 16 x 10.5in (584 x 406 x 266mm) wheels first. The bins offer 40% more space and enable 50% more bags to be carried, Bombardier says.

Atmosphere also introduces a redesigned forward lavatory, offering 60% more space than previously and designed to improve accessibility for passengers with reduced mobility. Bombardier says the CRJ is the only regional aircraft so equipped.

Another objective with Atmosphere is to improve the feel of the cabin for passengers by making it brighter and airier. Guay said Bombardier took inspiration from the car industry, smoothing out the lines in the cabin walls and redesigning the seats to improve sight lines. LED mood lighting is also standard, having previously only being an option at the aftermarket stage for customers who wanted it.

While less of an issue for regional aircraft than it is for longer-range aircraft operating long-duration flights, in-flight entertainment and connectivity (IFE&C) is nevertheless important for all manufacturers. Passengers have high expectations around IFE&C, because they are used to having connectivity when they’re out and about on the ground. The CRJ has Ka-band and Ku-band connectivity and in-cabin content streaming.

A change Bombardier will introduce to the CRJ later this year is an extended C check maintenance interval, up to 8,000 flying hours. This will follow an improvement in the A check interval to 800 flying hours introduced in 2017.

Lengthening the maintenance intervals is intended to trim direct maintenance costs, one of the key outgoings for an airline. Structural fatigue inspections are now carried out at 40,000 flight cycles and structural inspections on the antennas used for controller-pilot datalink communication (CPDC) are every three years. Structural tasks are conducted on the aircraft at the second A check (therefore 1,600 flying hours) or at the C check (8,000 flying hours).

Guay feels dispatch reliability is an important factor in the CRJ’s business case: “When you look at the incident rate on the CRJ, you realise we’re exceeding industry standards. We have an aircraft that’s offering 99.5% dispatch reliability and it is one of the lowest aircraft regarding [maintenance] incidents. That helps the airlines a lot with their operations.” 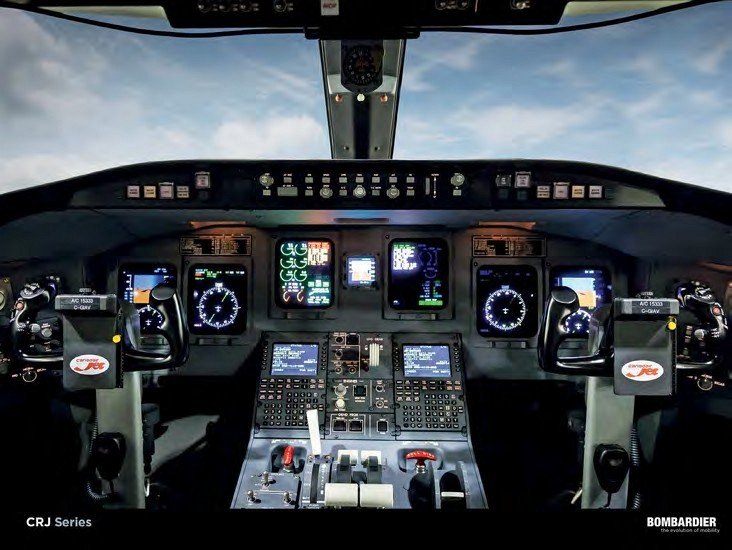 Improvements to the CRJ family flight deck include the addition of automatic dependent surveillance-broadcast out equipment to comply with new regulations in the United States. 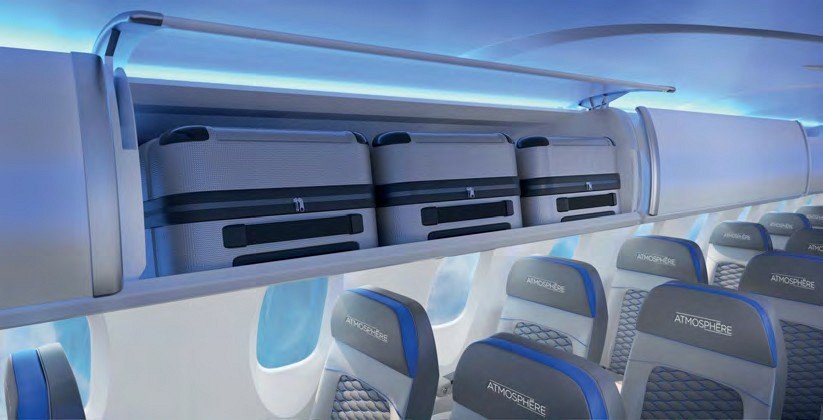 The combination of lower direct maintenance costs and reduced fuel burn leads Bombardier to claim the CRJ700 has an overall 9% operating cost advantage per seat on in-production rivals, the CRJ900 a 7% advantage and the CRJ1000 a 10% advantage.

Other improvements to the CRJ concern the flight deck, to ensure regulatory compliance and address airlines’ requirements. A significant recent change to the aircraft’s Rockwell Collins ProLine 421 avionics suite is the provision of automatic dependent surveillance-broadcast out (ADS-B Out).

Mandatory ADS-B is a key component of the Next Generation Air Transportation System in the United States. It involves the automated transmission of precise aircraft positions based on GPS data and the US Federal Aviation Administration (FAA) requires all aircraft operating in controlled airspace in the United States to have ADS-B Out transmitters by January 1, 2020.

Guay said: “Since last year, all aircraft delivered from the factory here in Mirabel have ADS-B Out as a baseline.” In addition to new builds leaving the production line, older CRJs are being retrofitted with ADS-B Out equipment under Part 25 Supplemental Type Certificates.

The ups and downs in the figures over the years reflect the typical peaks and troughs in the commercial aircraft business. Bombardier believes there will be another upswing in demand for the CRJ thanks to the characteristics of two key markets: China and North America.

Regional aircraft have so far formed a relatively small part of air travel growth in China, which the International Air Transport Association has predicted will overtake the United States as the world’s largest air passenger market in 2022, but it anticipates a strong market ahead because of a decree called Rule 96 introduced in 2016 by the country’s regulator, the Civil Aviation Administration of China.

Guay explained: “The Chinese government wants to make sure they increase domestic connectivity to second and third-tier markets, cities with around one million [people] in population. Rule 96 is designed to promote that connectivity to markets that are underserved.”

Rule 96 requires Chinese start-up airlines to establish a fleet of 25 regional aircraft and achieve a fleet utilisation rate of 3,000 flying hours a month before they can consider acquiring aircraft in the larger-capacity single-aisle size category like Airbus A320s or Boeing 737s.

Guay said the rule creates a big opportunity for regional aircraft manufacturers, whose products meet the requirements laid down. The CRJ already has a foothold in the market thanks to operators such as China Express, which is now flying 32 CRJ900s and has another six on order.

It is, however, the mature North American market where Bombardier envisages the bulk of future CRJ business. Guay said: “We see it as the strongest market moving forward; we see over 1,400 new deliveries over the next 20 years.”

Driving the demand will be a replacement market for small regional jets. Scope clauses in contracts between airlines and pilots’ unions, which mean aircraft manufacturers must match prescribed seat numbers and maximum take-off weights, dictated the configuration of the original 50-seat CRJ100/ CRJ200 and 44-seat CRJ440 and the newer CRJ700 (76 seats), CRJ900 (90 seats) and CRJ100 (100 seats).

Over the long term, the capacity of regional aircraft operating in the United States has increased, mirroring the wider trend of up-gauging elsewhere in the airline industry. The big three major airlines in the market have all downsized the fleets of smaller regional jets flown by their partner airlines in favour of 70 to 90-seaters. According to the FAA’s latest Aerospace Forecast, Delta Air Lines plans to have just 125 50-seat regional jets in its network, having had nearly 500 at the end of 2009. American Airlines has phased out 25 50-seaters in the last couple of years and United Airlines aims to have around 100 by 2019, the FAA said.

Bombardier’s latest long-term market forecast covering 2017–2036 says: “The limit of 76 seats [in the current scope clauses] has created an opportunity for the new generation jet in the small single-aisle segment to bridge the fleet gap and provide mainline carriers with the ability to right-size capacity to market demand. This was not possible with previous small single-aisle products, due to their sub-optimised design and resulting high unit cost. Only optimised aircraft in this segment are able to provide the cost efficiency and profitability needed. This allows airlines to open up new market opportunities. Many airlines will add aircraft in the small single-aisle segment, signalling the end of scope creep and the beginning of a new era in this market.” 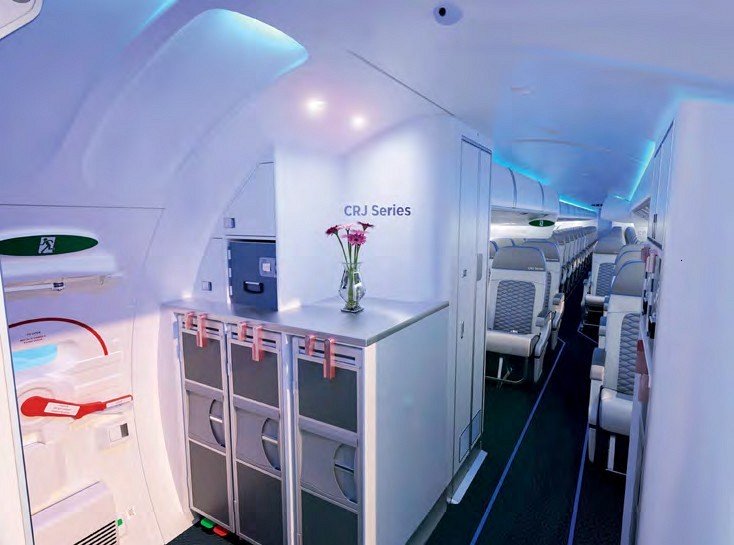 The Atmosphere cabin, to debut this year, includes a redesigned forward entrance area to increase space.

Bombardier believes this wider trend will benefit the CRJ. Guay said: “Probably 90% of the installed base will be replaced over 20 years, so there’s a large replacement opportunity in the North American market …[operators] can grow to a CRJ700 or CRJ900 and maintain commonality. We strongly believe the CRJ is very well positioned for the market moving forward.”

Bombardier sees further potential for the CRJ beyond China and the United States. Guay said more customers in more areas of the world are starting to operate the aircraft. The last five years have seen 25 new airlines added to the operator base, he said. 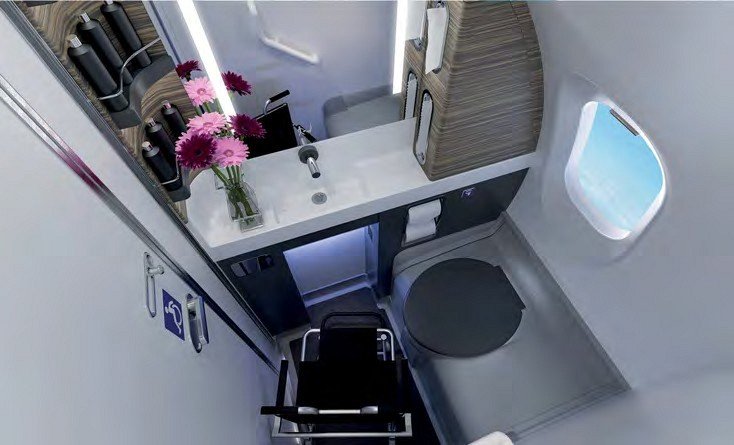 A redesigned forward lavatory offers 60% more space and is designed to improve accessibility for passengers with reduced mobility.

This could lead to new sales as the aircraft goes on to the radar in territories where it hasn’t operated before; for example, last year, India’s SpiceJet signed a letter of intent for up to 50 CRJ900s, although it has yet to finalise the order. There is also an opportunity for replacement aircraft in other mature markets, such as Europe, where the CRJ range had its debut in the 1990s with Lufthansa.

Guay concluded: “It remains a programme in which Bombardier will continue to invest. We monitor very closely what the airlines need and make smart investments to meet those evolving needs.”