Cutbacks hit Vulcan to the Sky

Avro Vulcan B2 XH558 was due to be towed out of its home in Hangar 3 at Doncaster Sheffield Airport, South Yorkshire at the end of January, to make way for new tenants following the expiry of the lease. The ‘V-bomber’ will be placed in a temporary storage facility that the airport is providing free of charge until the end of April.

Over the next few months, the Vulcan to the Sky Trust (VTST) —the charity that owns and operates XH558 — and Doncaster Sheffield Airport hope to conclude an agreement to build a new hangar, allowing the resumption of tours, events, educational visits and engineering activities by the end of 2017. These businesses will then fund the lease of the hangar from the developers until the larger, more ambitious Etna facility, for which the airport has allocated 30,000 square metres of space, is ready (see ‘Aeroplane meets…’, February 2017 Aeroplane).

Dr Robert Pleming, chief executive of the VTST, states: “Over the past six months we have been working with the airport on our plans to progress a superb, purpose-built hangar for XH558. While both parties are confident of a successful outcome, the short-term challenge is that we must vacate Hangar 3. This creates a funding challenge because the revenue-earning businesses that are vital for her care must be temporarily suspended. We have had to make some very tough decisions.”

The VTST team will now be slimmed down from 22 to just eight full-time staff, supported by volunteers and a few part-time staff. Both Dr Pleming and business development director Michael Trotter will be moving to part-time roles where they will continue to provide strategic direction for the trust.

“I am very sad to lose many highly talented colleagues who have worked incredibly hard to achieve a remarkable eight years of display flying that many thought would be impossible”, said Pleming. “I cannot thank them enough. This is a bitter decision, but one that is necessary to ensure Vulcan XH558 continues to be protected while we rebuild the trust around our goals for the future.”

The move, and loss of revenue generated by tours and events, is expected to cost around £200,000 more than VTST can afford. Half of this amount has been promised as matched funding by philanthropists close to VTST, against donations from XH558’s supporters. “Every pound donated will effectively be doubled”, Pleming stated. “This is a very generous offer. The trust needs these funds urgently to survive. I encourage everyone who shares this vision to do whatever they can to help today”. The longer-term goal remains to establish a centre for the restoration, maintenance and operation of British jet-age aircraft. The next step, following completion of the new hangar, is intended to be the resumption of the restoration of the trust’s English Electric Canberra B2/6 WK163/G-BVWC.

Steve Gill, the chief executive of Doncaster Sheffield Airport said: “Housing the Vulcan, a prestigious piece of British aerospace engineering, is an honour for Doncaster Sheffield Airport. We have long been supportive of their vision to establish the Etna Project to meet the important objective of inspiring future generations to engineering and aviation. We are deeply committed to working with the trust to realise this goal”. 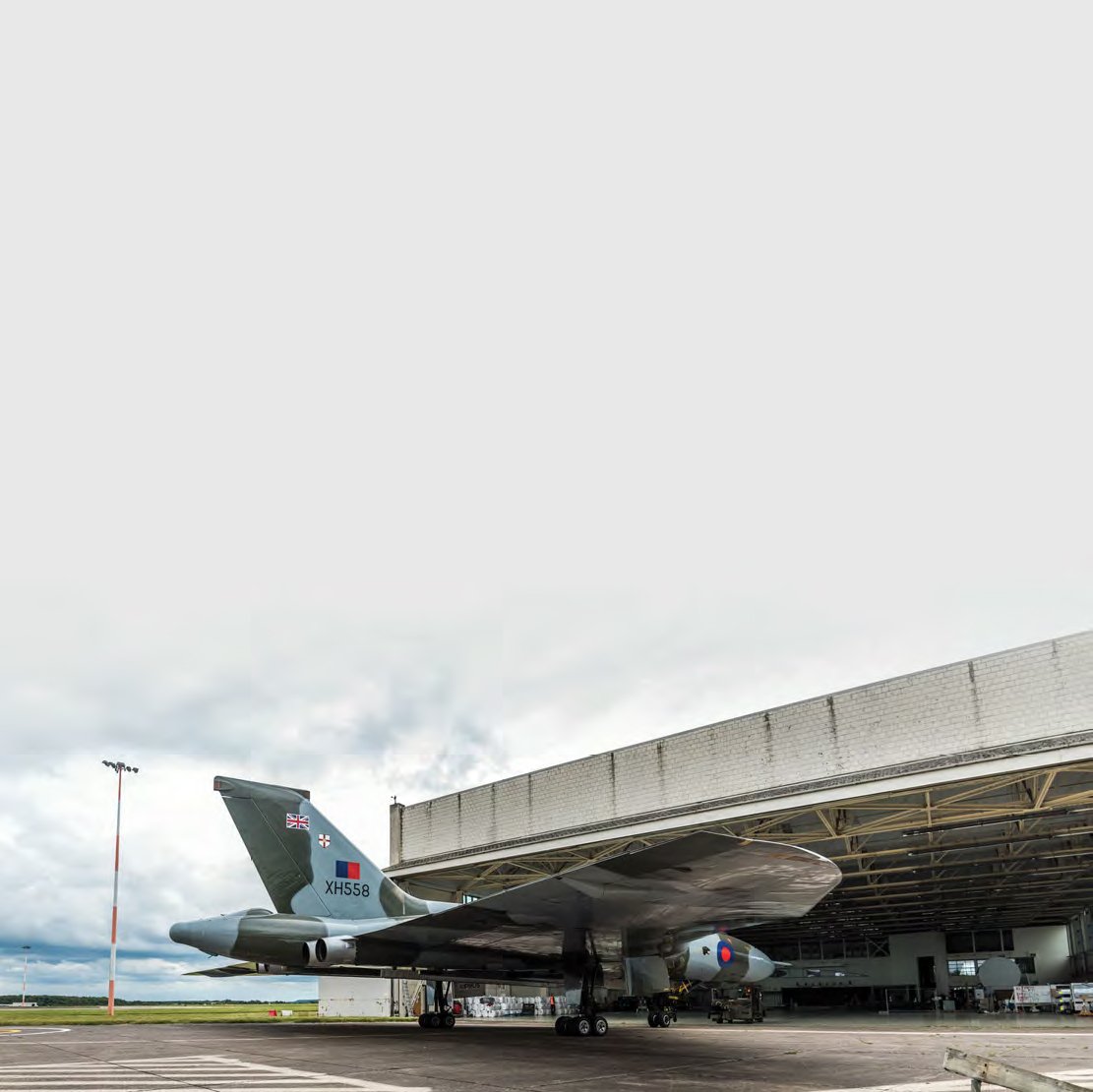 Vulcan B2 XH558 outside Hangar 3 at Doncaster Sheffield Airport prior to an engine run in 2016. The building dates back to the days when Vulcans, includingXH558,were based at what was then known as RAF Finningley.
VTST