VOUGHT F7U-3 Cutlass BuNo 129544 has been acquired by Al Casby’s Project Cutlass in Phoenix, Arizona. The former US Navy fighter had previously been owned by Tom Cathcart, the director of aircraft collection/restoration at the Museum of Flight in Seattle, and is at present stored in the museum’s restoration shop at Paine Field. The Cutlass was used as a maintenance trainer at Geiger Field in Spokane, Washington until it was sold as surplus by the Navy in 1958 and placed on display in a park in Bridgeport, Washington until being acquired by Cathcart in 1992. The aircraft will remain at Paine Field until Casby can make arrangements to transport it to Arizona, no mean feat as the centre section is some 21ft wide.

Only seven examples of the Cutlass are known to survive, several of which are incomplete. The National Naval Aviation Museum at Pensacola, Florida has the only complete F7U currently on display. 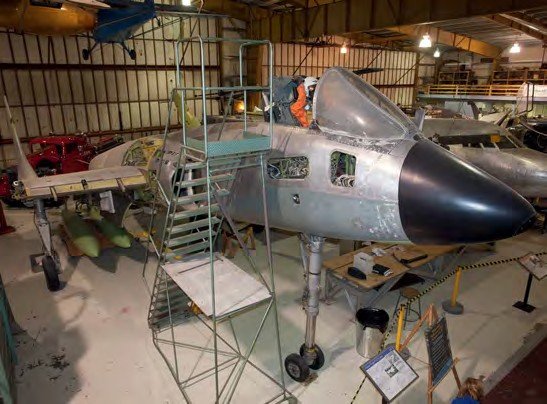 Seen in the Museum of Flight workshop at Paine Field, F7U-3 Cutlass BuNo 129544 will soon move to Arizona for restoration to fly.
MIKE SHREEVE