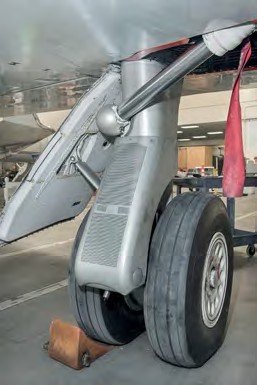 An experimental landing gear featured tiny holes designed to allow some air to flow through the fairing to reduce noise. Ken Ulbrich/NASA

A RECENT series of test flights by NASA’s Armstrong Flight Research Center has demonstrated a package of new technologies that achieve what the agency has called a “significant reduction in the noise generated by aircraft and heard by communities near airports”.

The Acoustic Research Measurement (ARM) flights, which concluded in May, tested several technologies designed to cut airframe noise during landing. Airframe noise is classed as the noise generated by the parts of an aircraft other than its engines such as the fuselage, landing gear and wings.

The ARM research involved installing several experimental designs on various components of the Gulfstream III, N992NA (c/n 309), operated by the Armstrong Flight Research Center in Palmdale, California, before flying the aircraft at 350ft (106m) above a microphone array consisting of 185 sensors deployed on the Rogers Dry Lake at Edwards Air Force Base.

A porous landing gear concept has been studied before, but NASA says highly detailed computer simulations led its engineers “to what they believe is the ideal design for maximum noise reduction without increasing aerodynamic drag”.

When landing gear deploys from the main body of an aircraft, typically a large cavity where airflow can get pulled in is created, which generates noise. For these tests, the Gulfstream received a series of chevrons placed near the front of the cavity on the gear. It also received a sound-absorbing foam at the trailing wall of the cavity, and a net was stretched across the opening of the main landing gear cavity.

NASA explained these adjustments “altered the airflow and reduced the noise resulting from the interactions between the air, the cavity walls, and its edges”.

To reduce wing flap noise, NASA used an experimental, flexible flap called the Adaptive Compliant Trailing Edge (ACTE) built by FlexSys Inc of Ann Arbor, Michigan. The ACTE flap was previously flight-tested on the NASA Gulfstream in 2014 as part of an earlier series of tests to study aerodynamic efficiency.

Unlike conventional wing flaps that typically feature gaps between the flap and the main body of the wing, the ACTE flap connects the flap to the wing without any gaps.

This obviously improves aerodynamic profile (which was recognised in the 2014 tests), but a secondary effect of smoothing out an aircraft’s body shape is cutting the noise generated by air flowing over the gaps.

NASA says the combination of the ACTE, the work to cover cavities and the revised gear yielded “a greater than 70% reduction” in noise from the Gulfstream during the ARM tests.

The agency believes the testing marks “an important achievement” in efforts to reduce aircraft noise, with ARM Project Manager Kevin Weinert hailing the results as “momentous”.

He said: “While there are obvious potential economic gains for the industry, this benefits the people who live near major airports, and have to deal with the noise of aircraft coming in to land. This could greatly reduce the noise impact on these communities.”

Khorrami added: “We are very confident that with the tested technologies we can substantially reduce total aircraft noise, and that could really make a lot of flights much quieter.”

Quiet operations are a key research theme for NASA just now. In addition to the ARM work on subsonic aircraft, the agency is also set to build a new X-plane for its Low-Boom Flight Demonstration mission. This will test quiet supersonic technologies developed by the agency in recent years. It is planned to fly the X-plane over communities in the United States and, the agency hopes, help to open an era of overland supersonic air travel.

In June, NASA announced this Quieter Supersonic Transport (QueSST) demonstrator for these trials, which is due to fly in 2022, has now received a designation: it will be called the X-59 QueSST. Mark Broadbent

NASA says there was a 70% reduction in aircraft noise during recent trials involving its Gulfstream III testbed from the Armstrong Flight Research Center. Ken Ulbrich/NASA