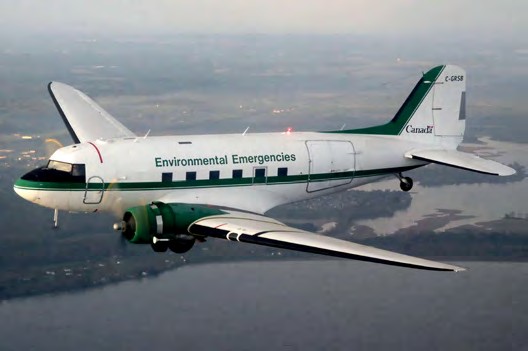 C-47 FZ692/C-GRSB, now back in the air with the CWHM, will soon have its Environment Canada markings replaced with its late-war scheme.
VIA AL MICKELOFF

At Hamilton, Ontario, the Canadian Warplane Heritage Museum (CWHM)’s Douglas C-47 FZ692/C-GRSB flew for the first time in nearly four years on 28 March. The D-Day veteran is now due to be ferried to an outside contractor for painting in its late-war No 437 Squadron, Royal Canadian Air Force scheme.

This machine is none other than the original Kwicherbichen, the aircraft whose markings the RAF Battle of Britain Memorial Flight’s Dakota III, ZA947, currently wears. Following delivery to No 233 Squadron stationed at RAF Blakehill Farm near Cricklade, Wiltshire in February 1944, the crews christened FZ692 as Kwicherbichen, presumably slang for ‘quit your bitching’ or ‘stop complaining’. It flew 16 operations with the unit, most of them during the D-Day period, when it made paratroop and supply drops and conducted several resupply and casualty evacuation missions from forward airfields close to the combat areas in northern France. By the end of 1944, 1,092 stretcher cases and 467 sitting wounded had been evacuated back to the UK by the Dakotas of No 233 Squadron.

During September 1944 FZ692 was transferred to No 437 Squadron, RCAF, flying 208 sorties with the unit during which it carried 298 casualties to receive medical aid and repatriated 456 prisoners of war. In total it transported more than 5,100 passengers to destinations around Europe and carried more than 200 tons of freight.

Post-war FZ692 flew with No 424 Squadron on search and rescue duties from Trenton, Ontario, and achieved fame when it performed a JATO ignition in flight along the Toronto waterfront during the 1970 Canadian National Exhibition Air Show. Following retirement from service in 1973, the aircraft was registered C-GRSB to Environment Canada, and used for mineral and environmental surveys before being donated to the CWHM in May 2014.