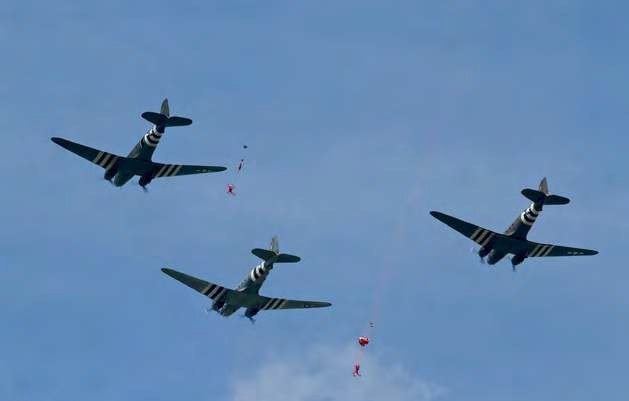 Parachutists from the Red Devils display team emerging from a trio of C-47s at Duxford’s 2014 D-Day anniversary show. Expect this number to multiple several-fold over Duxford this June.
IWM

On 28 January the Imperial War Museums announced that the 75th anniversary of the Normandy landings will be marked with an unprecedented gathering of up to 38 Douglas C-47/DC-3 variants at the Cambridgeshire airfield. The Daks over Duxford event will take place on Tuesday 4 and Wednesday 5 June, before the aerial armada heads off over the Channel to Caen Carpiquet airport on 6 June for Daks over Normandy, which will see several of the fleet involved in commemorative paratroop-dropping flights during the following three days.

A major component of this once-in-a-lifetime gathering is the D-Day Squadron of American-based ‘Daks’, 20 of which had been confirmed as participants as of the end of January.

The project is being spearheaded by Eric Zipkin and the crew of Connecticut-based C-47 N74589 Placid Lassie, which was restored from dereliction at Covington, Georgia in 2010, and was flown to Oshkosh for the DC-3 75th anniversary celebrations at AirVenture in August of that year (see Aeroplane January 2011).

Among the other US-based aircraft scheduled to appear are N103NA from Flabob, California, which flew as FD879 with VIP transport unit No 24 Squadron from Hendon during the war, very rare DC-3S N29TN operated by TransNorthern Aviation from Anchorage, Alaska, and the Commemorative Air Force’s D-Day veteran C-47 N47TB That’s All Brother based at San Marcos, Texas. The current plan is for the American contingent to assemble and depart from the north-east United States in early May for the Atlantic crossing.

For tickets to Daks over Duxford go to www.iwm.org.uk/daks-over-duxford.