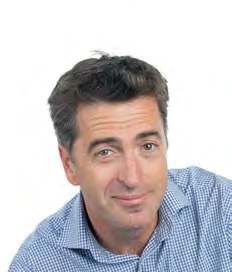 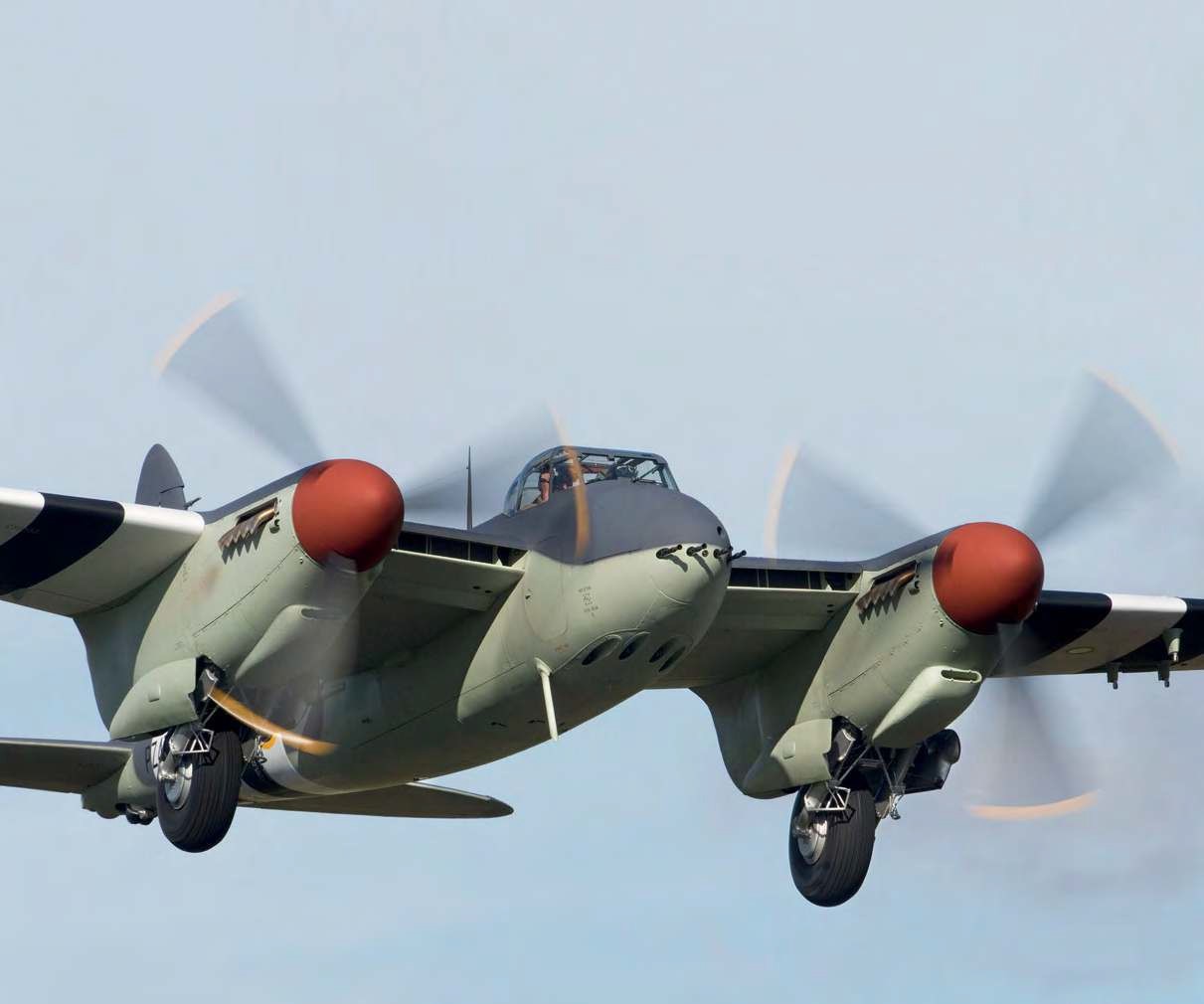 The third de Havilland Mosquito to be rebuilt by Avspecs made its maiden flight at Ardmore, Auckland on 13 January with Steve Hinton at the controls and Avspecs boss Warren Denholm in the right-hand seat as observer. By the end of January the Rod Lewis-owned Mosquito FBVI, PZ474, had completed five test flights and accumulated two-and-a-half hours before being dismantled for transportation to Chino, California. The final destination for the fighter-bomber is San Antonio, Texas, where the Mosquito will join the Lewis Air Legends collection.

PZ474 wears the colours of No 235 Squadron, based at Portreath on the north Cornwall coast during June 1944. In this 75th anniversary year of the Normandy landings, Rod Lewis has gone for a paint finish featuring full D-Day invasion stripes, but he also wanted the machine to have dummy rockets fitted, these two requirements presenting a bit of a challenge when it came to finding an authentic colour scheme. To this end much research was undertaken.

Andy Hosking from Avspecs explains, “My take is that it represents a No 235 Squadron Mosquito of RAF Coastal Command in June 1944, just after the unit had replaced its Beaufighters with Mosquitoes.

The suggestion is that they probably weren’t operational with the Mosquito until 16 June, but still would have had full invasion stripes applied. At the time they were operating out of Portreath on antishipping strikes over the Bay of Biscay area, until moving north to Scotland along with Nos 248 and 333 Squadrons to join the Banff Strike Wing in September 1944. I believe that the order/ permission to remove the invasion stripes from the top surfaces of aircraft was given in July 1944. Between August 1943 and July 1944 Coastal Command aircraft carried no squadron code letters — only a single individual aircraft identification letter and a single number on their fuselage sides.

PZ474’s No 235 Squadron scheme has the individual aircraft letter L and the number 3 forward of the fuselage roundel. 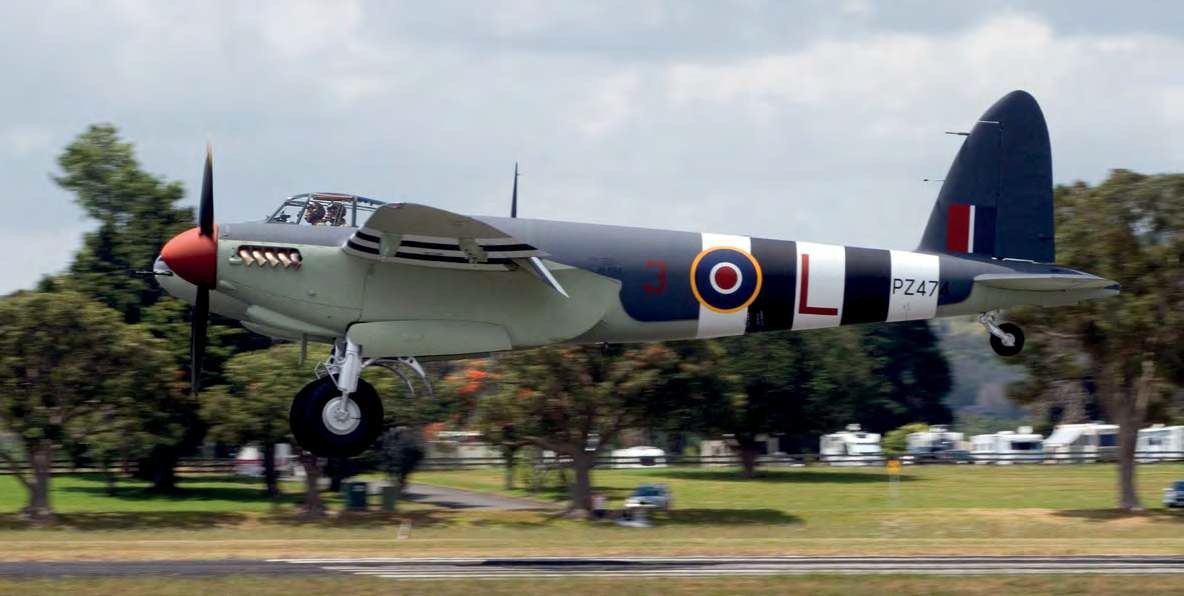 With Warren Denholm alongside, Steve Hinton brings PZ474 in to land at Ardmore during the light-test programme.
TONY SMITH

The remains of PZ474 — which had been stored at Chino — arrived in New Zealand during 2014. By early 2016 Mosquito Aircraft Restoration, run by Queen’s Service Medal recipient Glyn Powell, had delivered the new fuselage to Avspecs. Aucklandbased Aerowood undertook woodwork for the in, tailplane, wing laps and the major portion of the wing build, after which Avspecs spent an estimated 60,000 man-hours on the project. The Merlin 25 engines, original to PZ474, were overhauled by Vintage V-12s at Tehachapi, California.

In order to it the rocket rails, the PZ474 project required the addition of plywood strengthening panels on the underside of the wing at the main spar, at the location of the forward rocket rail stub mounts, and the not-so-discreet bumps on top of the wings created by the special stainless-steel rocket rail mounting stub attachment studs. The restoration team was fortunate that Glyn Powell had an original Mk3 rocket rail for them to copy. Almost everything else was reproduced from drawings and technical information that Avspecs managed to acquire, but this aspect of the rebuild ended up being quite an involved process. The team had a die made to allow blanks for the rails to be extruded to the correct profile from aluminium. They were then fitted with cast alloy end fittings patterned off Glyn’s original items.

In the 1960s, PZ474 became derelict at Whiteman Air Park in Burbank, California, and several parts went missing. Fortunately, important components were discovered to still exist as decoration on a hangar wall at Whiteman, such as the spinners and side cowling panels.

Summing up this third Mosquito project, Warren Denholm says, “It’s fantastic to have the opportunity to incorporate the detail and attention to originality that we have been able to do on this example. This requires a customer who understands what it takes to achieve this goal and is prepared to invest the money required. Thank you Rod!”

The next two projects at Avspecs will be Mosquito BIV DZ542 and T43 NZ2308. A full history of PZ474, meanwhile, will be detailed in the cover feature in the next issue of Aeroplane.