Stories about new strategic weapons under development in Russia, interspersed with video displays, eclipsed all other topics during the annual speech by Russian President Vladimir Putin before the joint chambers of the Russian parliament on March 1. This year’s two-hour presentation was perhaps more significant because it took place just weeks before the presidential election later. Piotr Butowski analysed the details 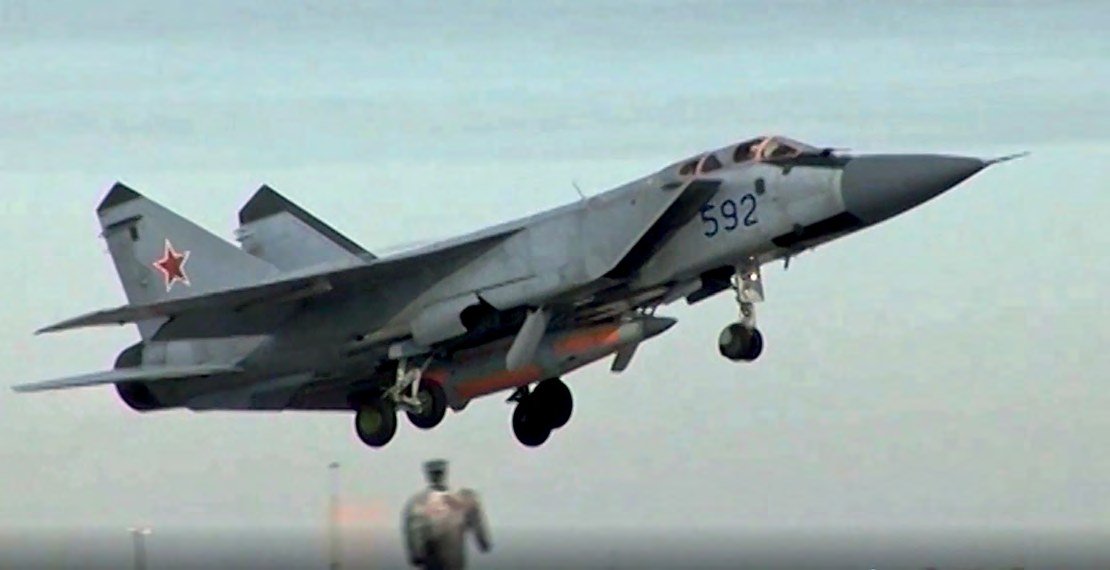 A series of take-off shots featuring RSK MiG’s MiG-31 592 loaded with a variant of the 9M723 Iskander missile developed by KB Mashinostroyeniya in Kolomna, which looks to be about 8m long. The age of these images was not given by the Russian Ministry of Defence.
The Kremlin

The video presented by Putin showed a series of events; the take-off of a MiG-31 heavy interceptor and an Iskander ballistic missile carried on the aircraft’s centreline pylon, then the missile’s separation from the aircraft, jettison of the forward and aft fairings, and the rocket motor start.

An animation sequence followed, showing the missile’s separation (probably at an altitude of a 39,370ft (12,000m) at a speed in excess of Mach 2, though the figures were not given), climbing above the stratosphere and several changes in direction. At this point the animation came to the fore with footage showing two strikes, one on a warship and one on a building. Putin said: “The missile, flying at hypersonic speed, exceeding ten times the speed of sound, performs manoeuvring during all segments of its flight to overcome, with a guarantee, all existing and, I think, future antiaircraft and anti-missile defence systems, and deliver nuclear and conventional charges to targets at a distance of more than two thousand kilometres.” 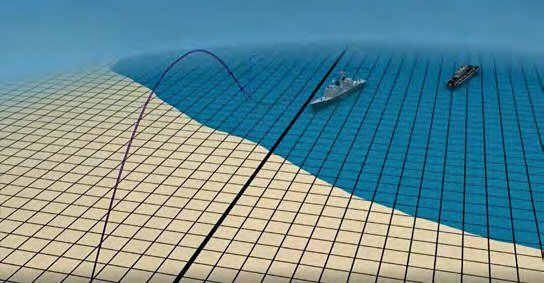 An animation showing Kinzhal missile trajectories with two warships in the shot; the one on the right resembling a Royal Navy Invincible-class aircraft carrier.
The Kremlin

The Iskander missile was developed by KB Mashinostroyeniya in Kolomna, and has been in operation with the Russian Army since 2007; its NATO reporting name is the SS-26 Stone.

The missile, carried by the MiG- 31 is about 8m (26ft) long, which compares to the 7.3m (24ft) long 9M723 standard surface-to-surface version due to a more streamlined nose and an additional rear fairing on the exhaust nozzle. The missile weighs about 4,000kg (8,818lb).

Iskander has several types of seeker: a radar correlation seeker (a correlation seeker compares the observed image in the target area with the image recorded in memory) or an optical correlation seeker, both developed by the TsNIIAG institute in Moscow; or active radar seeker made by the Radar MMS company in St Petersburg for the anti-ship version.

Putin said the missile had been under evaluation since December 1, 2017 under testcombat duty conditions at airfields of the Southern Military District. The term ‘test-combat duty’ means the system has not been officially commissioned and is still undergoing evaluation.

Interestingly, there are no operational MiG-31 units assigned to the Southern Military District; its aviation assets are managed by the 4th Air Force and Air Defence Army headquartered at Rostov-on-Don. The only place within the Southern Military District with MiG-31s assigned is the 929th Gosudarstvennyi ordena Lenina Krasnoznamionnyi Lyotno – Ispytatelnyi Tsentr imeni V.P.Chkalova (929th State Flight- Test Centre at Akhtubinsk). 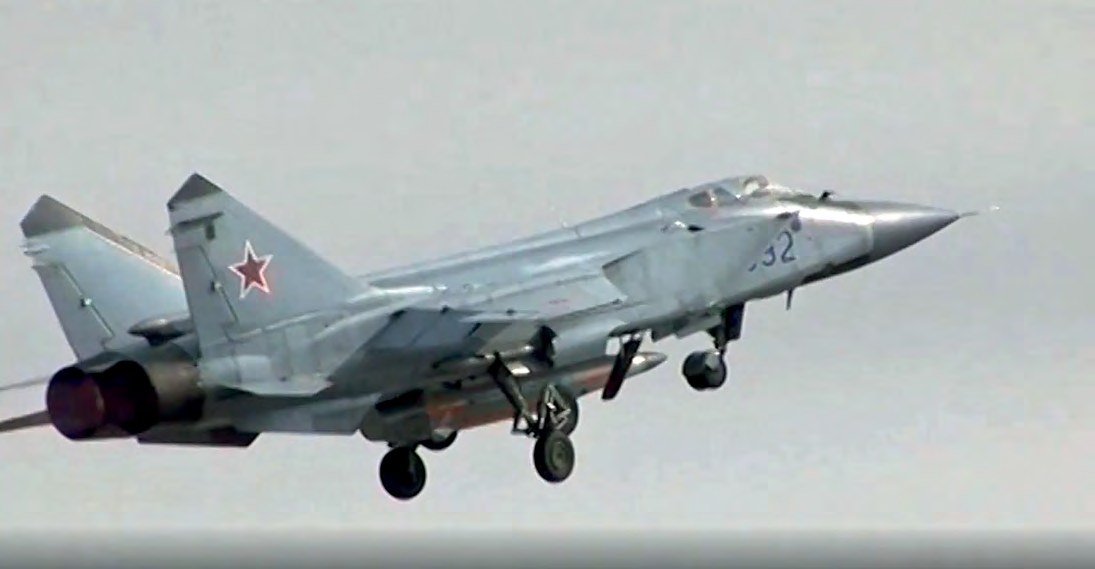 The MiG-31 shown by Putin in his video was number 592, which belongs to the Russian Aircraft Corporation (RSK) MiG, and has been used for years at Zhukovsky and Akhtubinsk for evaluation. In 1987, aircraft 593 was the first MiG- 31 equipped with aerial refuelling capability; the age of the video is unknown though, it might be quite old.

An animation showing the Kinzhal missile’s separation from a MiG-31.
The Kremlin

The Kinzhal system is not the only hypersonic weapon program currently in development by Russia. The Tactical Missiles Corporation (KTRV) is making the GZUR (izdeliye 75) missile for heavy bombers, and the NPO Mashinostroyeniya company is making 3M22 Tsirkon hypersonic missiles for submarines and surface ships.

Why Putin chose to present the Kinzhal remains unknown, it might be that this air-launched missile appears more impressive than the higher-priority GZUR and Tsirkon programmes.

Various Russian sources report that RSK MiG is currently working on two new modifications of the MiG- 31 with the ambiguous designations izdeliye 06 and izdeliye 08.

One designation may be assigned to the Kinzhal, while the other may simply be a new version of the MiG-31 or for an aircraft with a totally different purpose, for example a satellite interceptor.

With a high-altitude cruise speed of Mach 2.35, the MiG-31 is a good platform for various weapon systems in addition to its standard interceptor function.

In January 1987, the MiG-31D (izdeliye 07) made its first flight as a satellite interceptor armed with the 79M6 anti-satellite missile; together, the aircraft and the missile created the 30P6 Kontakt anti-satellite system. Two MiG- 31D prototypes were built, but in 1991, work on the MiG-31D and its MiG-31DM developmental version (armed with the improved 95M6 missile) was stopped. Following collapse of the USSR, both MiG- 31D prototypes remained at the Sary Shagan test range in Kazakhstan, where they had been undergoing evaluation.

In 2001, RSK MiG presented the MiG-31S, a commercial project to be used as a launch platform for small space vehicles. This included the Micron with the ability to deliver a 100kg (220lb) orbital vehicle to an altitude of 200km (124 miles) and the Aerospace Rally System three-seat rocket glider for suborbital flights; a system to be used for training space crews, space tourism and advertising.

In 2005, Russia and Kazakhstan revealed a plan to create the Ishim aerospace system comprising a MiG-31I carrier aircraft and a 10,300kg (22,700lb) Ishim missile suspended under the fuselage. The Ishim was to be capable of delivering a 160kg (353lb) satellite at 300km (186 miles) orbit. The project was to be financed by the government of Kazakhstan but has been abandoned after funding cuts.

Footage of two Su-57 fighters arriving in Syria on February 21, was supposed to be a part of Putin’s address. Images of the two aircraft involved are very blurred, but were probably prototypes T-50-9 and T-50-11.

However, for unknown reasons, plans for the Su-57’s deployment to Syria changed, and the two fighters returned to Russia after two days, nor did Putin mention the aircraft during his two-hour presentation. A decision may have been made that in contrast to revolutionary missiles, the wellknown T-50 PAK FA (Su-57) aircraft would make little impression, and perhaps the Syrian situation was omitted as it was deemed an uneasy topic to include. 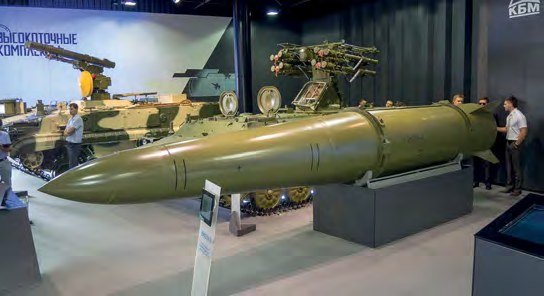 An inert version of the Iskander 9M723 surface-to-surface missile in service with the Russian Army, a variant of which is believed to be part of the Kinzhal missile system.
Piotr Butowski