‘Daks’ flood into the UK 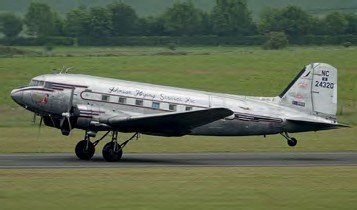 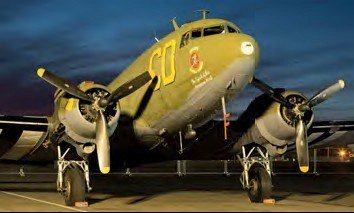 The D-Day 75th anniversary deluge of Douglas DC-3/C-47 variants began to arrive at Duxford during the early afternoon of 21 May, when the fi rst of the 15-strong American contingent, DC-3 N33611 Clipper Tabitha May, landed following a journey from its base at Alexandria, Virginia. Now painted in Pan Am colours, while being operated by ERA Alaska Airlines it became the last C-47/DC-3 to fl y in scheduled passenger service in the USA, being retired in 2003.

All 15 of the trans-Atlantic visitors taking part in the Duxford and Normandy events had arrived at the Cambridgeshire airfi eld by the evening of 1 June. Last of them was the ex-Gen ‘Hap’ Arnold C-41A N341A, following a late start from Oakland, California where it had undergone fi nal preparation prior to the epic journey.

As of press day on 3 June, a total of 22 aircraft were present at Duxford in the lead-up to departure for Caen-Carpiquet Airport on 5 June, with the large formation then routing over Colchester, Southend, Maidstone and Eastbourne before heading across the English Channel. Aeroplane will be on board the Tunison Foundation’s C-47A 42-24064 Placid Lassie, and a full report will appear in the next issue.

During the fi rst week of May, former Royal Danish Air Force Hawker Hunter F51 E-408 was mounted in front of the Centerprise International offi ces just outside Basingstoke, wearing the markings of an Iraqi Air Force Hunter FGA9 fl own by the company chairman Rafi Razzak’s father, Sqn Ldr G. Arif A. Razzak, during the 1967 Arab-Israeli war.

Originally delivered to Eskadrille 724 in Denmark during 1956, the Hunter was retired in 1974 and bought back by Hawker Siddeley in 1976 with the intention of refurbishing and reselling it. However, E-408 failed to fi nd a buyer and was eventually allocated to RAF Brawdy for display. Once Brawdy found a more appropriate example of the Hunter — FGA9 XE624 — E-408 moved on to Cranwell and was painted as XF979. Several other owners followed before it was acquired from North Scarle, Lincolnshire in 2018 by Rafi Razzak and delivered to Lee-on-Solent on 6 July 2018, where it spent the following 10 months being restored and repainted in Iraqi markings by Mark Masters of CAV Aircraft Services. It emerged again on 3 May with the markings ‘349’ before delivery to its new home in north Hampshire.

Adrian M. Balch TOP: Touching down at Duxford on 21 May, DC-3 N33611 Clipper Tabitha May had made the trans-Atlantic crossing from its base at Alexandria, Virginia. DAVID WHITWORTH ABOVE: Based at the Museum of Mountain Flying in Missoula, Montana, DC-3 NC24320 Miss Montana alighted at Duxford on 29 May. DAVID WHITWORTH

ABOVE RIGHT: In lieu of their display happening this year, the Scottish International Airshow organisers staged a public event at Prestwick on 25 May to coincide with the presence of several ‘Daks’ en route to Duxford, preceded by a night photo-shoot the evening before. One attendee was C-47A N47SJ Betsy’s Biscuit Bomber. ROLF JONSEN/AIRTEAMIMAGES.COM