DOUGLAS DC-3 ZS-NTE was unveiled in a 1956 Aer Lingus colour scheme in Hangar 6 at Dublin Airport on 20 July, having flown from its base at Zweibrücken, Germany to Shannon on 13 June for the repaint. The machine, which now wears the registration EI-ACD and the name St Gall, appeared at both the Foynes Air Show and the Bray Air Display over the weekend of 22-23 July before heading back to Germany.

Aer Lingus has funded and wholeheartedly supported the project, and it is planned to keep ’NTE in the Irish national airline’s colours for the next three to five years. It will return to Ireland next summer, and is due to take part in the 70th anniversary of the start of the Berlin Airlift in 2018 and the ‘Daks over Normandy’ event during June 2019.

The aircraft is owned by German businessman Peter Adrian, who is based in Trier and also owns a North American T-28 and a Beech 18. It was flown to Ireland by Flippie Vermeulen, a retired South African Airways captain who owned the transport before selling it to Adrian in 2015.

Aer Lingus originally introduced the DC-3 to service during April 1940, but the war interfered with operations. The type really hit its stride with the airline when nine former USAAF C-47s were purchased in 1945. Seven of these were subsequently converted to DC-3 airliner standard and two were reduced to spares. Two new DC-3s were supplied by Douglas in February 1946, the type becoming the core of the fleet as the airline expanded its network of services. The DC-3s were replaced by the Fokker F27 Friendship, but five of the ageing ‘Dougs’ remained in service until 1963-64.

ZS-NTE was built in September 1943 and flew with the RAF until being transferred to the South African Air Force in 1945. After retirement in 1995 it was sold to Springbok Classic Air, and following seven years in storage was restored to flying condition in 2009, being modified from C-47 cargo-hauler to DC-3 passenger configuration. 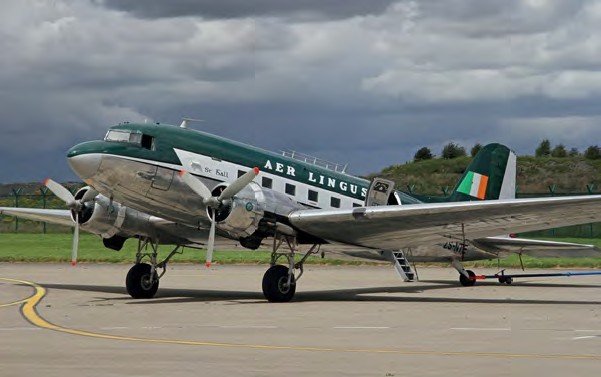 DC-3 ZS-NTE at Dublin Airport on 22 July, wearing what must be one of the most attractive schemes to ever grace this once ubiquitous type.
GABRIEL DESMOND