RAZBAM has announced that its DCS: AV-8B Night Attack V/STOL is now available as an open beta. 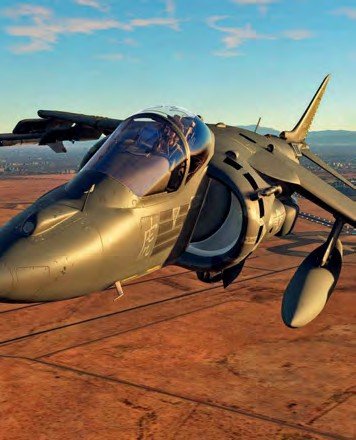 The package is based on the AV-8B N/A Bu No’s 163853 and up - the latest variant of the AV-8B. The AV-8B project was introduced to address the operational inadequacies of the AV-8A first generation Harrier. It made its maiden flight in 1981 and entered service with the US Marine Corps in January 1985.

It later evolved into the AV-8B N/A (Night Attack) and AV-8B Harrier II Plus. The AV-8B N/A variant (originally known as the AV-8D) had its first operational development in 1984. Key highlights of RAZBAM’s AV-8B N/A variant include an advanced flight model with accurate Vertical Take-Off and Landing (VTOL) characteristics, a detailed external 3D model while the 6-DOF cockpit features high-resolution textures, specular and bump mapping and mouse-interactive controls.

All systems have been realistically modelled including the electrical, fuel, hydraulics, lighting, engine and navigation.

• Under-wing pylon stations holding up to 9,200lb (4,200kg) of payload for a multitude of both air-to-air and air-to-ground ordnance

• Detailed representation of the USS

For more information and to view the promotional trailer, visit: www.digitalcombatsimulator.com/en/products/planes