Seventy-five aircraft and helicopters flew over Red Square for the Victory Day parade on May 9, just half the number in the jubilee parade of 2015. Some types were there for the first time. Piotr Butowski reports from Moscow 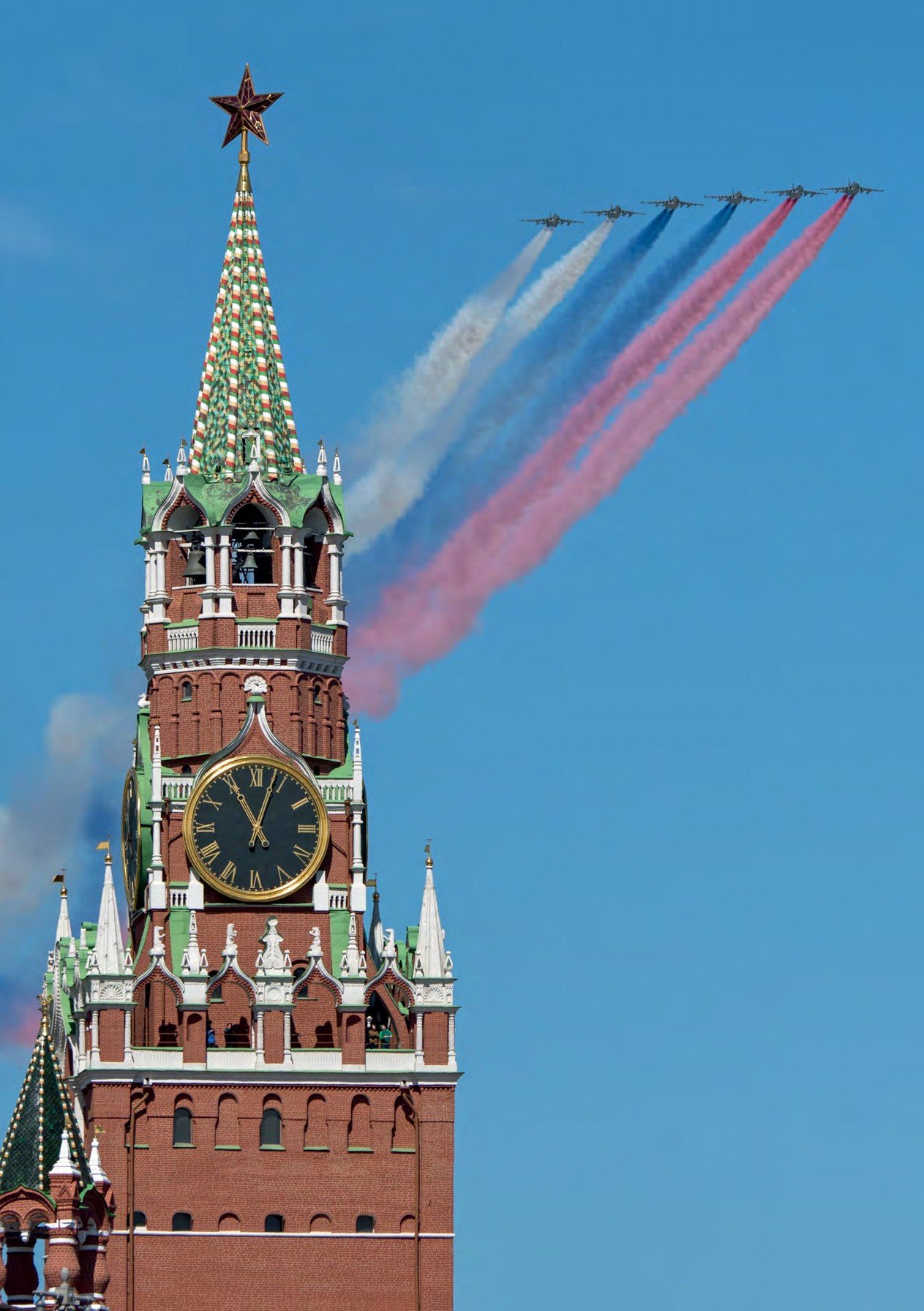 Shendrik at the controls, took part in the parade for the first time in the middle of the aircraft column.

More than eight years have passed since the T-50’s first flight on January 29, 2010, at Komsomolsk-on-Amur. Ten flying prototypes are currently undergoing tests, T-50-1 through T-50-6, then T-50-8 through T-50-11; the missing aircraft, T-50-7, is used for static tests. Sukhoi recently announced that 2,050 test flights had been flown under the PAK FA programme by December 31, 2017. The company also declared: “The test flights necessary to obtain the certificate of the first stage of the state evaluation were completed in late 2017 …in 2018 the trials will be continued under the second stage of state evaluation, with planned completion in 2019’.

Speaking on Russian TV several months ago, Russian Deputy Minister of Defence Yuri Borisov announced that his ministry intended to sign a contract for a batch of production Su-57 fighters for evaluation and combat use, with delivery in 2019. The batch of initial-production Su-57 fighters (reportedly between eight and 12 aircraft) will be deployed to the evaluation centres at Akhtubinsk and Lipetsk. Full-scale production will be launched once the newgeneration izdeliye (product) 30 engine is ready; flight tests started on December 5, 2017. Sukhoi claims the Su-57 “will be the company’s primary product in the aircraft technology market from 2020”. The Komsomolsk-on-Amur factory is expected to reach an annual output rate of 24 fighters (two squadrons) by 2025.

Most impressive among the Moscow parade debuts was the fly-pass by a pair of MiG-31K strike aircraft, which closed the column of aircraft.

He said: “The missile flying at a hypersonic speed, 10 times faster than the speed of sound, can deliver nuclear and conventional warheads to a range of over 2,000km’. 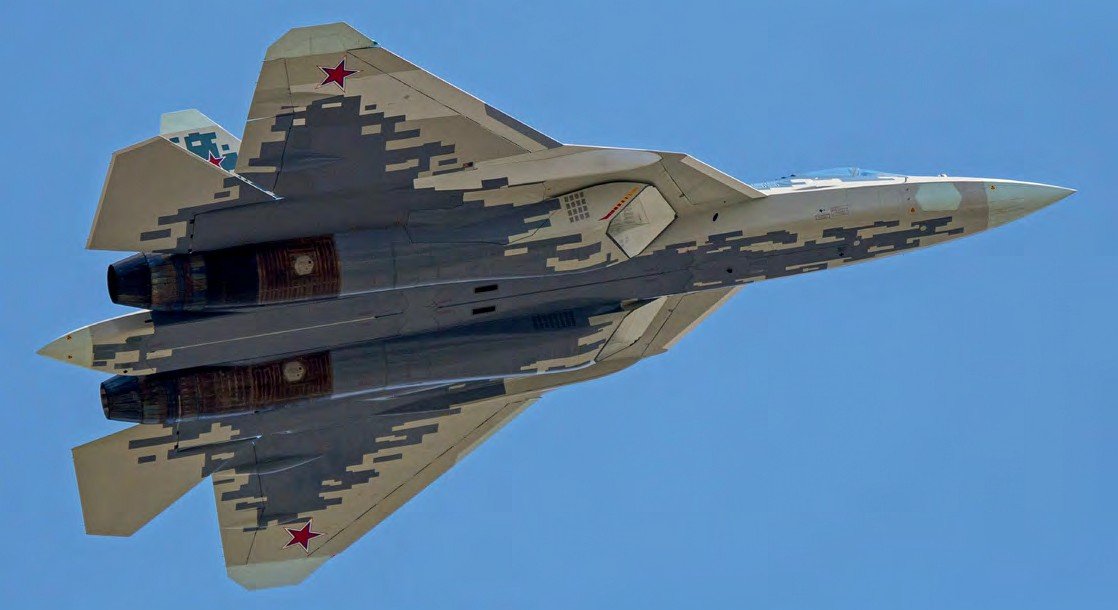 Su-57 055 (prototype T50-5) was seen for the first time with a new two-tone pixelated colour scheme painted on its fuselage underside.

Several weeks before the parade, a wave of repainting began. First the Kinzhal missiles, carried by MiG-31s were painted white; during the first rehearsals for the parade they were in their natural colours.

Then aircraft and helicopters were repainted; previous titles reading VVS Rossii (Russia’s Air Force) were changed to VKS Rossii (Russia’s Aerospace Forces), and the font and sometimes the colour of the tactical numbers was changed.

Both Su-57s had a new pixelated camouflage scheme applied on the under surfaces, especially for the display; the upper surfaces feature the same paint scheme previously used on T-50-9 509.

The most controversial new paint scheme appeared on the Tu-160 Blackjack bomber. Previously, each aircraft had the Russian flag painted on the tailfin, and the Air Force flag painted on the aircraft nose, with individual names stencilled in large, stylised letters. The aircraft in the parade was painted white, with just the individual names stencilled in small, plain letters. Reportedly, all Tu-160s will be painted that way, not only for the parade. 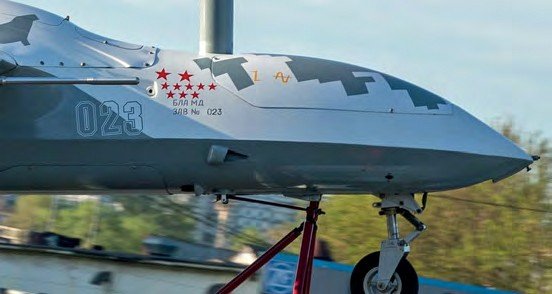 Close-up shot of Korsar air vehicle 023 (which served as a spare for the parade) shows the two large and eight small red stars painted on its nose.

For the first time in the history of Russian parades UAVs were displayed, with two fixed-wing Korsar and two rotary-wing Katran UAVs driven around the ground parade on trucks.

The Korsar (pirate) is a small tactical UAV made by the KB Luch design team in Rybinsk, similar in form and general scheme to the Israeli RQ-7 Shadow. It is a 200kg (441lb) vehicle that can operate for a duration of 10–12 hours within a radius of 27 nautical miles (50km). It was ordered by the Russian MoD in 2012; the first demonstrator vehicle completed its first flight in 2015. A few days before the parade,

Yuri Borisov said the Korsar “has completed state trials recently, and we will buy it”. Launch of the Korsar’s series production is planned at a new facility in Rybinsk; the production rate is set to be 100 vehicles a year. 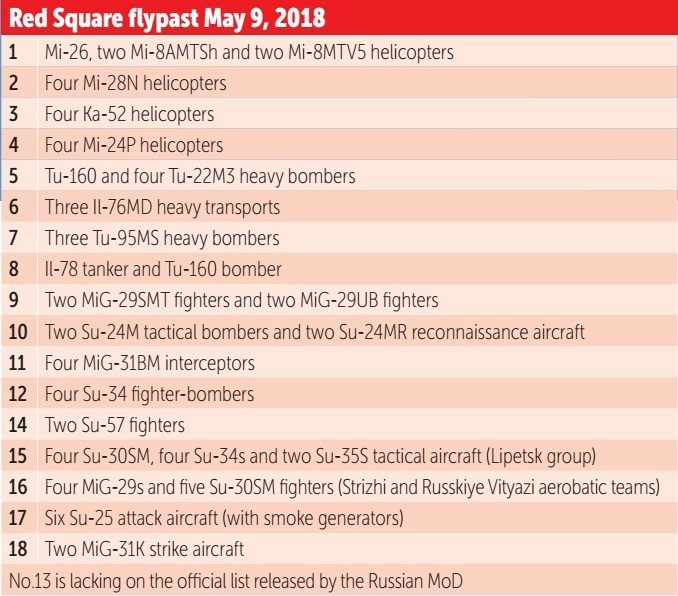 During live coverage from the parade, the TV announcer said the Korsar had been tested in Syria. Vehicle 023 (which was not displayed at Red Square, but served as a spare) had two large and eight small stars painted on its nose. It is not known what the stars denote, but one can guess this vehicle has made 28 flights (or combat sorties). The Katran (spurdog) rotarywing UAV is far less advanced.

It has yet to fly and its first flight is expected in the second half of this year. Katran is designed and manufactured by the Kumertau enterprise, a part of Russian Helicopters. According to Russian Helicopters, a Katran weighs 500kg (1,102lb) including 150kg (331lb) of payload. Its speed is 81kts (150km/h) and the endurance is four hours. Katran’s problem is the lack of a Russian-made engine; at present it is powered by a Rotax 912 IS. 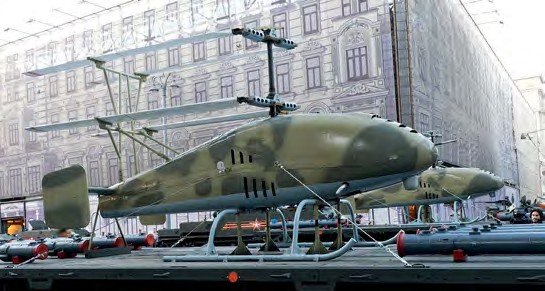