Delta Air Lines’ first Airbus A220-100 N101DU (msn 50020) after rolling out from the painting hangar at the A220 inal assembly line in Mirabel, Québec, before it started test lights in October. Airbus

Delta Air Lines’ initial A220-100 has started test lights in Mirabel, Quebec. The aircraft, N101DU (msn 50020), rolled out of the paint shop in September before undertaking static tests, engine runs and ground taxiing and then undertaking its first light on October 6. The aircraft’s first light lasted two hours and 53 minutes. Pre-delivery testing and cabin outitting will continue before the jet is handed over to Delta, a milestone due by the end of the year.

Delta plans to put N101DU into service early in 2019. The airline will be the first North American carrier to use the A220 and the fourth overall after Swiss, Air Baltic and Korean Air.

Delta is by far the largest A220 customer, having ordered 75 examples with options for 50 more. Its order, initially placed in April 2016 when the A220 was still designated the Bombardier CS100 and two years before Airbus took on the programme, sparked a protest from Boeing. The US manufacturer claimed the aircraft was being “dumped” in the North American market. This led to tarifs on the type, but early in 2018 the US International Trade Commission overturned these, paving the way for Delta to take on the new jet.

Chilean low-cost airline SKY presented its initial Airbus A320neo, CC-AZC (msn 8444), leased from the Air Lease Corporation, in October. The jet is the first brand-new aircraft to be operated by the carrier and is operating services from Santiago to Arica and Punta Arenas. Alvaro Romero 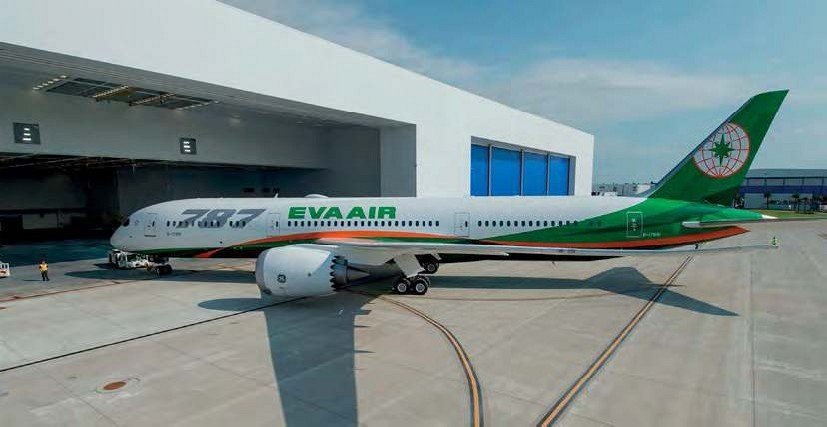 Taiwan’s EVA Air has received its initial Boeing 787-9. The aircraft, B-17881 (c/n 39295) is on lease from Air Lease Corporation and is planned to debut on the carrier’s international routes in November. EVA Air is set to operate 24 Dreamliners in total. Another four 787-9s and two 787-10s will be leased from ALC and 17 787-10s will be delivered from a direct order from Boeing. Mark Broadbent

The Lufthansa Group has placed a repeat order for Airbus A320neo Family aircraft, taking its total orders for the jet to 149. The Group has ordered 27 more aircraft consisting of 24 A320neos and three A321neos. Ten of the 27 new aircraft are earmarked for Swiss, with the remaining 17 distributed across the Group. Mark Broadbent 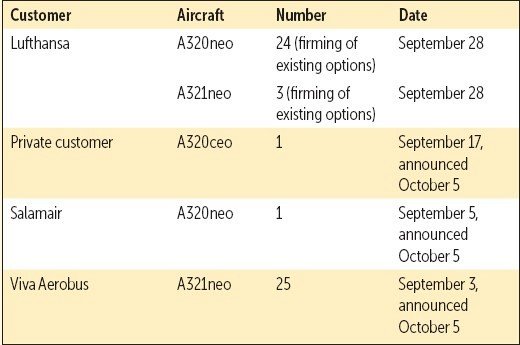 The Philippines carrier Cebu Pacific is having two of its ATR 72-500s converted into freighters. The airline has signed an agreement for the work with IPR Conversions Ltd (IPRC), the large cargo door modification supplementary type certificate holder for the turboprop, with IPRC contracting Sabena Technics to undertake the work at its Dinard, France, facility. The modification work will involve the installation of both bulkload and large cargo doors, allowing standard containers and pallets to be carried. IPRC has recently signed an agreement granting ATR the licence to install the IPR Large Cargo Door on new FedEx ATR 72-600 freighters. Mark Broadbent

Air France has announced a cabin upgrade its 15 Airbus A330-200s. The aircraft are to be retrofitted with an updated interior with new seats in premium economy and economy classes offering greater legroom and storage, new HD seatback screens and a new in-flight connectivity service called Air France Connect. The first upgraded A330 will be refitted from January 2019. Air France has operated the A330-200 since December 2001 and the cabin upgrade will be the first since 2010. Mark Broadbent

Work has started at the Voronezh Aircraft Factory on the prototype United Aircraft Corporation Il-96-400M airliner. An upgraded stretched-fuselage version of the Il-96-300, it is powered by PD-14M turbofans. A prototype engine on an Ilyushin Il-76T testbed aircraft has started a third stage of flight-testing. The Il-96-400M makes use of Russianproduced engines and components and it is less vulnerable to international sanctions than other current Russian civil aircraft. The Voronezh factory has been identified as receiving Russian government investment funding earlier this year. David C Isby

Russia’s Irkut, a subsidiary of the United Aircraft Corporation that will produce the MC-21 airliner, will expand its facility at Ulyanovsk’s Vostochny airport. Intended to be complete by 2020, it will be able to handle two aircraft simultaneously and service up to 72 MC-21s annually for pre-delivery inspections and maintenance. David C Isby

An additional JPY 120 billion ($1.05 billion) investment in the Mitsubishi Regional Jet (MRJ) programme by parent company Mitsubishi Heavy Industries has been announced. It is part of a JPY 200 billion ($1.79 billion) investment package for Mitsubishi Aircraft, to be transferred by April 2019. It is intended to prevent further delays in the first MRJ deliveries to All Nippon Airways, currently scheduled to take place before March 2021. David C Isby

The Nigerian government has suspended plans to create a new national carrier, dubbed Nigeria Air, that was first announced earlier this year. Aviation minister Hadi Sirika announced the “interim” suspension in late September without giving a reason. In July, he stated the new national carrier would commence operations before year-end. The Nigerian government had earlier said it would provide $55 million this year as start-up capital and deposit for new aircraft, whose delivery was to begin in 2021. The airline was to be run through a public private partnership, with Ethiopian Airlines apparently a leading contender. Nigeria has been without a national airline for several years; Nigeria Airways was founded in 1958 and ceased operations in 2003 and its successor Air Nigeria operated from 2005 to 2012. Guy Martin

The low-cost airline Primera Air ceased operations in early October after entering administration. The Danish airline had operated for 14 years and used a fleet of Boeing 737s and Airbus A320s. The carrier, which operated a network of services from Northern Europe to Mediterranean, Middle East and North American destinations, said it had to cease trading after being unable to reach an agreement with its bank on financing. Primera had ambitious plans to expand its long-haul network across the Atlantic using new 737 MAX 9s and A321neos, serving points in North America from several European airports. Mark Broadbent