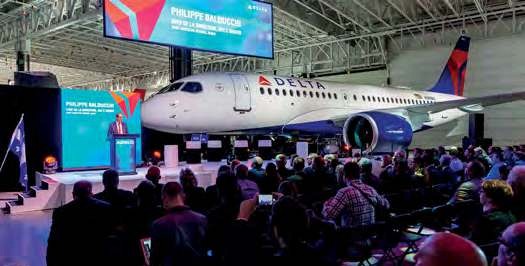 Delta Chief Executive Officer Ed Bastian said: “We have big plans for our A220 fleet and are confident that Delta customers and Delta people alike will be delighted with the in-flight experience provided by this thoroughly modern and efficient aircraft.”

Delta’s A220 will enter service in early 2019, making Delta the fourth global airline to operate the aircraft previously known as the Bombardier C Series. The C Series Aircraft Limited Partnership welcomed Airbus as lead partner earlier this year, prompting the change of name to the Airbus A220.

Delta is the largest A220-100 customer, with a firm order for 75 examples, and next year will become the first North American airline to operate the new A330neo. The carrier is set to place the A220s on routes taking in Boston, Dallas, Detroit, Houston, Minneapolis/St Paul, New York LaGuardia and Salt Lake City next year. Mark Broadbent