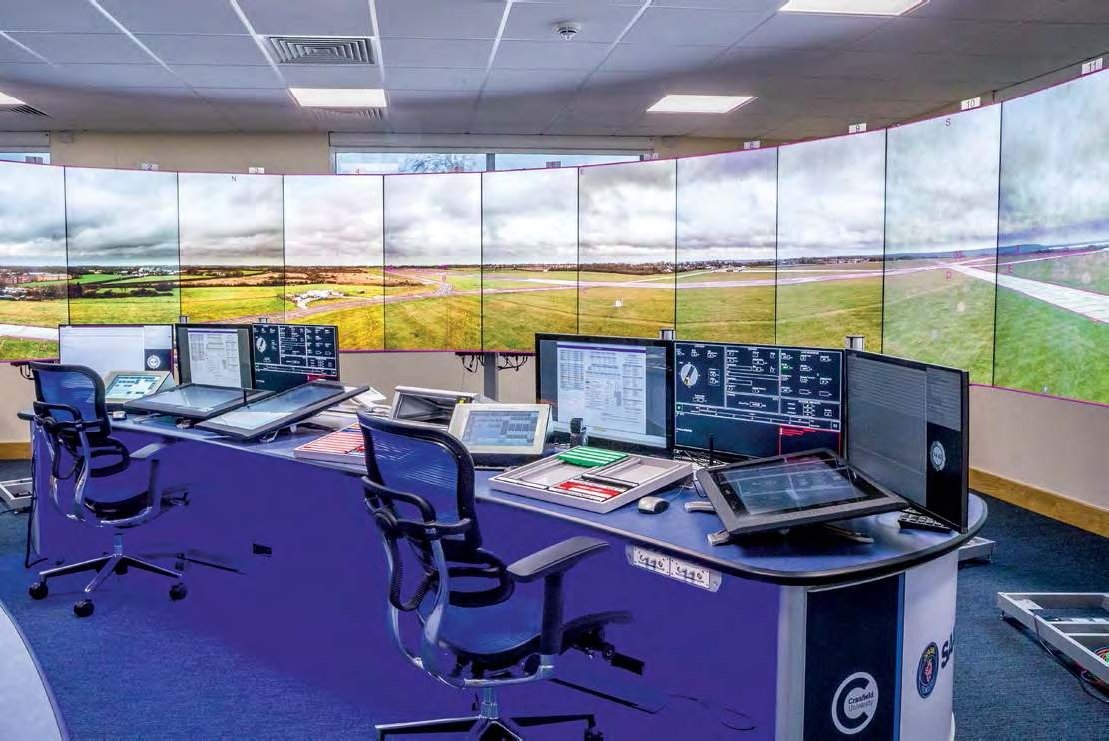 Cranield Airport is the irst in the UK to have an operational digital air traic control tower, with HD cameras providing real-time images of the airield.
Cranfield University

SINCE THE start of routine commercial air services a century ago, the concept of giving controllers in the tower a direct view of operations so they can direct aircraft to, from and around an airport has remained constant.

Recently, however, a new concept has emerged: the remote digital tower, using new technology to create a new way of managing traic.

A digital tower uses highdeinition, day and night-visible, thermal and pan-tilt-zoom cameras to provide real-time images to air traic controllers sitting many miles away. The live feed of panoramic views captured by cameras is re-created as a large, seamless panoramic image. The view is then augmented with operational and sensory data from other sources, such as radar and light information on individual aircraft and the location of closed taxiways. Together, all the data is combined to provide the remotely located controllers with a 360o view of an airport.

Cranield Airport in Bedfordshire has recently become the irst airport in the UK to have an operational digital air traic control tower. The tower has been supplied by Saab Digital Air Traic Solutions. A statement from the airport’s owner and operator, Cranield University, said the airport is now working with the Civil Aviation Authority to complete the transition from the airport’s traditional tower to the new digital centre.

A second digital tower was introduced at another Swedish regional airport, Sundsvall, in 2016, and digital tower trials have also taken place in various countries, including Australia, Hungary, France, Ireland and the United States.

Saab explains that at Örnsköldsvik, cameras and sensors located at the airport record what is happening, with a secure data network used to transfer images and data digitally to a facility in Sundsvall, from where the controllers manage Örnsköldvik’s traic. At Sundsvall, there are 4.5ft (1.3m) screens on the walls of an operations room presenting a “window-like 360-degree view” over Örnsköldvik, which is 93 miles (150km) away.

Photos of the Cranield digital tower similarly show an ops room with large wall-mounted screens replicating the view seen through the windows of a traditional air traic control tower, with the live feed of panoramic views displayed on 14 screens.

Saab Digital Air Traic Solutions says that digitising and integrating airport functions improves a controller’s situational awareness by enabling quick and informed decisions and providing an ability to zoom in on aircraft and locate them in poor visibility.

The system adjusts the images automatically to account for sunlight and precipitation, so it is possible to follow an aircraft whatever the prevailing conditions. Diferent types of information can be integrated into the same view on the screen, such as weather and wind force data. The Swedish digital towers are located at relatively geographically remote regional airports that, although clearly important for the communities they serve, have just a handful of movements a day.

With its 20,000 movements a year (mainly business jets and research lights), Cranield is busier than those Swedish airports, although of course it has nowhere near the number of aircraft movements of the major London airports nearby.

For Cranield speciically, the digital tower will contribute to the airport’s wider aerospace research and development work. The tower is part of the £67 million Digital Aviation Research and Technology Centre, scheduled to open in 2020, where one of the aims is “increasing the eiciency of airports through technological advances”.

Moreover, the UK’s air navigation services provider NATS insists “it’s a total misconception that digital towers are only suitable for small airports” with low complexity and low traic volumes. It says remote air traic services over great distances are already provided: for example, in the form of the en route services provided for the North Atlantic tracks.

Steve Anderson, NATS’ Head of Airport Transformation, says: “We shift huge amounts of radar and communications data around a secure network every single day to provide a service in some of the world’s busiest airspace, so I’m absolutely conident we can do the same for any airport.”

Indeed, Cranield will not be the only airport in the southeast UK to have a digital tower. London City Airport’s new tower, due to open this year to replace the airport’s existing 30-year-old facility, is digital. The new tower will have 360° HD cameras and sensors capturing views of the airport and operational data that will be sent via independent superfast secure ibre connections to a new control room at NATS’ Swanwick headquarters in Hampshire, some 80 miles (128km) away to the southwest. Again, Saab Digital Air Traic Solutions is providing the technology.

Introducing a digital tower to the London airports system will doubtless provide a case study for what NATS calls “the biggest transformation in air traic management since the introduction of radar”. Will digital towers become an ever-more common sight across the UK? Mark Broadbent