Fw 190 and Spitfire IX: famed adversaries of the Second World War. But how does a new-build Flug Werk FW 190 stack up against an original example of the Supermarine classic? An experienced New Zealand warbird pilot offers his view 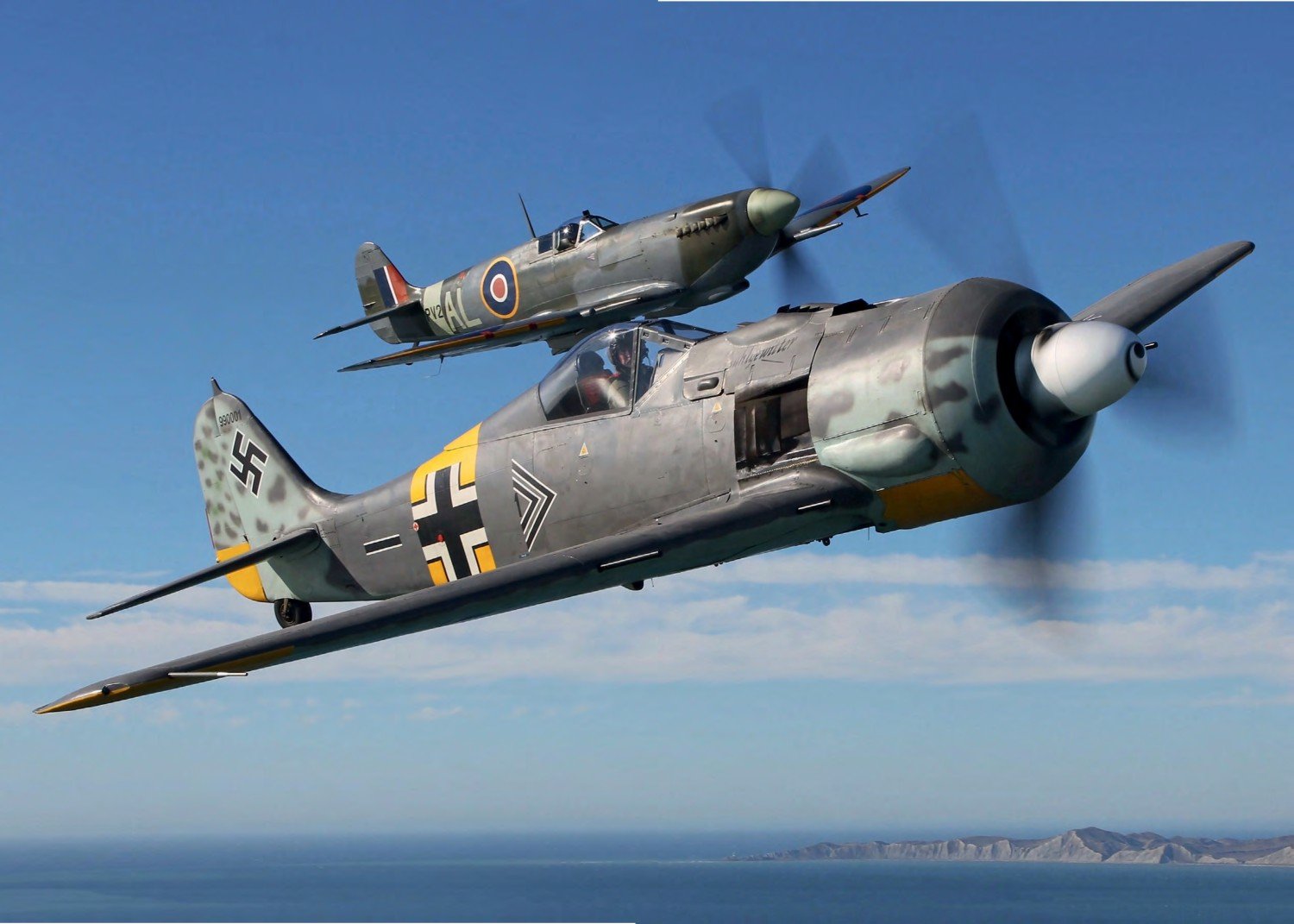 Flug Werk FW 190A-8/N ZK-RFR of the Chariots of Fire Fighter Collection at Omaka was the German company’s initial example of the new-build Focke-Wulf Fw 190. It is accompanied by Spitfire LFIX PV270, owned by wartime ace Al Deere’s nephew Brendon and based at Ohakea.

“In the words of Focke-Wulf chief designer Kurt Tank, while the Spitfire was a racehorse, he designed the Fw 190 to be a ‘Dienstpferd’, a cavalry horse, which could stand the rigours of field service”

To compare these two aircraft requires a review of their design eras, for this explains a lot about them. Detailed work on the Spitfire began in 1934, with the first flight of the prototype during March 1936. It is an aircraft with a mixture of systems: pneumatics for the flaps and brakes, hydraulics for the undercarriage, and little thought as to cockpit ergonomics. The initial prototype of the Focke-Wulf Fw 190 took to the air in June 1939, and the first production aircraft in November 1940. All its systems are electric, and the controls for those systems are placed logically; the cockpit works well, which is different to the norm for the era. In the words of Focke- Wulf chief designer Kurt Tank, while the Spitfire and the Messerschmitt Bf 109 were racehorses, he designed a ‘Dienstpferd’, a cavalry horse, which could stand the rigours of field service. 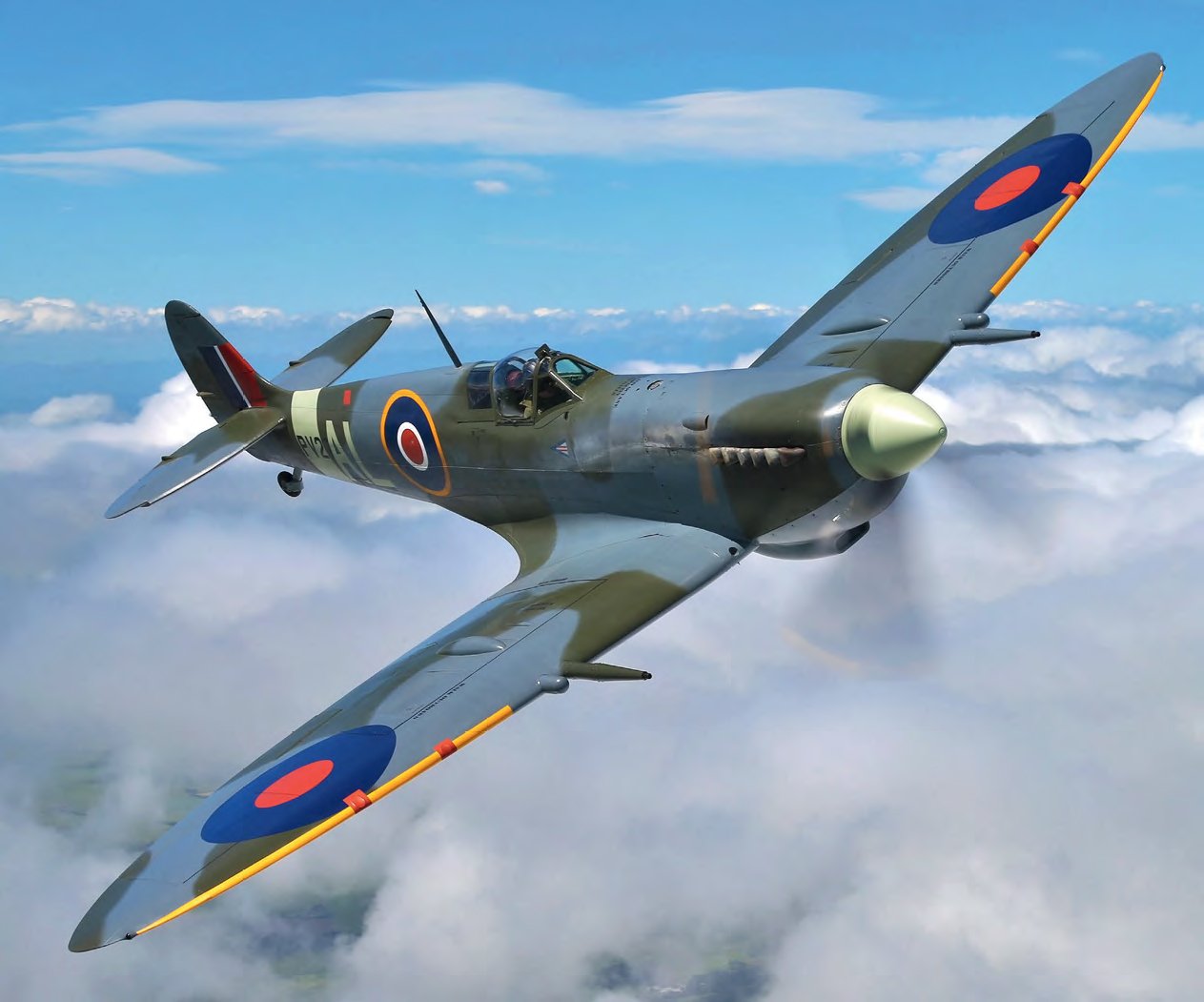 Let’s begin with a walk-through. The pre-flight inspections are typical for such aircraft — Spitfire: fuel, oil, coolant, pneumatics, airframe inspection; FW 190: fuel, oil, drain the engine induction tubes (to prevent hydraulic lock on start-up) and airframe. Their cockpits are snug for a 185cm-tall, 82kg pilot, but whereas in the Spitfire you are seated, in the FW 190 you are almost supine, to mitigate the g factor.

The Spitfire’s cockpit layout is a little mixed, so the checklist flow is disjointed but easy to deal with. For example, fuel is on/off, and the electrics are on/off with no separate battery or generator switches as on most American aircraft, all of which makes systems operation simple.

The FW 190’s cockpit is busier than the Spitfire’s but has a better flow. Electrical controls are either push-button for the undercarriage or toggle switches for the flaps, trims, shutters and so forth, all nicely grouped by the throttle. There is a fuel tank selector, again well-placed on the lower instrument panel. I would suggest that there was some pilot input to this cockpit. 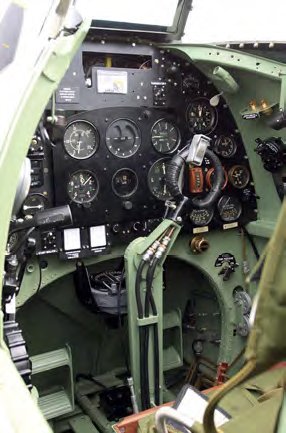 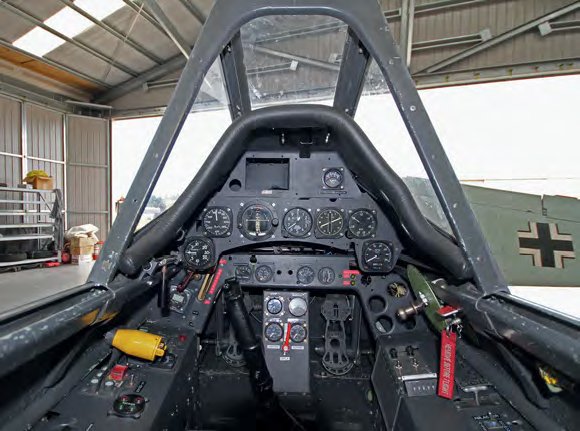 Contrasting cockpits: unergonomic but characterful Spitfire (left), busier but better-organised FW 190 (right) with the unusual yet functional split of the instruments into two layers.

The starting processes are different but similar. Priming in the Spitfire is done via a cockpit hand pump, and in the FW 190 with an electric solenoid valve. The Spitfire has a direct-drive starter — a two-finger push (start and booster coil) and the Merlin will fire and settle into a silky-smooth V12 idle. The FW 190 has an inertial starter, and after a few blades the ASh-82 engine of this Flug Werk reproduction — accompanied by copious amounts of oil smoke — will spring into a lumpy radial idle.

When it comes to taxiing, both aircraft have a castoring tailwheel so heading control requires the use of brakes. The Spitfire has pneumatic brakes applied by a control column lever (think bicycle brake handle) and controlled by the rudder pedals, which takes a few ‘exposures’ to master. The FW 190 has hydraulic pedal brakes, so is comparatively easy. 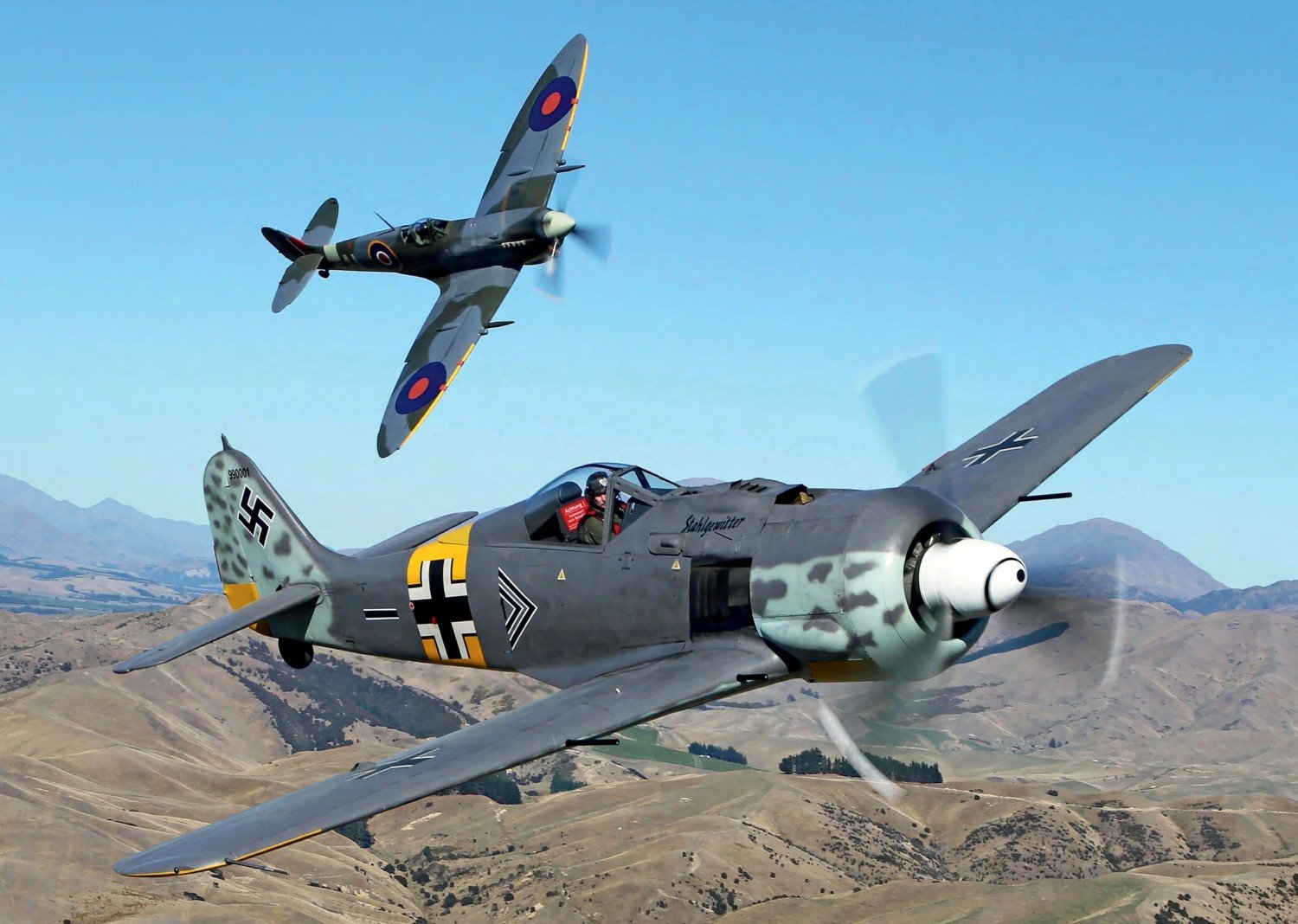 Standard engine checks are propeller function, magnetos, system temps and pressures, and idle. At this point in the Flug Werk aeroplane you realise you are a metre or so behind the ASh-82’s straight exhaust stacks, and the noise is impressive.

For all aircraft of this class it is essential to feed in the power gradually during take-off to ensure sufficient rudder control to counter the torque effects. In this regard the Spitfire has plenty of control whereas the FW 190 will bite if you’re too aggressive with the power. You quickly discover the stops when applying right rudder! Post-take-off the Spitfire is busy. You need to change hands on the spade grip, whereupon the power will fall off if the throttle friction is not tight, to free up the right hand to work the undercarriage selector, which is a bit on the clunky side. In the FW 190 you drop your hand off the throttle to the undercarriage button selector. One push — job done.

These aircraft are thoroughbreds, but their general characteristics diverge. As alluded to, the Spitfire’s V12 in general just purrs. Engine handling is simple: automatic boost and mixture control, power is ‘set and forget’. The flight controls are conventional although they lack the classic harmony between aileron, elevator and rudder forces of the P-40 or Mustang. The ailerons are slightly heavy and clunky with chains, cables and so forth in the control runs, while the elevators are finger-light. By comparison the FW 190’s controls have a neutral feel. They don’t ‘talk’ to you, but they feel the same at 200km/h as at 500km/h, almost as if there was a computer in there somewhere. The ASh-82’s engine handling is straightforward. As power is increased, it throbs, and it is loud.

The Spitfire is renowned for its handling. The stall is benign and when manoeuvring there is plenty of buffet to warn you that you’re approaching that limit. Classical aerobatics are easy, although the roll rate is pedestrian. You need to take care in pitch with those light elevators, as it would be easy to ‘snatch’ out of a loop. Overall, playing in the Spitfire is a pleasant experience.

By comparison, the FW 190’s stall is sudden with little buffet. It is masked by engine vibration, and this aircraft has a noticeable right wing drop. It will stall in manoeuvres with no warning, turning a loop into a roll off the top. I am mindful of this.

Again, standard aerobatics are no problem, although the aircraft does have yaw cross-coupled with pitch, making a straight loop a challenge. The aircraft develops quite a vibration under g, which may be from the widechord propeller blades, and while the roll rate is probably double that of the Spitfire the pilot has to ‘drive’ the aircraft through manoeuvres. It’s equally capable but less pleasant.

Anyone who has flown tailwheel aircraft will know the challenges of landing them. The Spitfire lands nicely, 100kt around base with full flap (it’s either up or down) reducing to 75-80kt across the fence. Bring the power off and that big wing floats you in — three-pointers or wheelers are both fine. Despite a narrow undercarriage, with a long wheelbase the aircraft tracks well. The only slightly tricky part is getting even braking with the spade grip brake handle and rudder control. In general, it’s no harder than a Chipmunk. 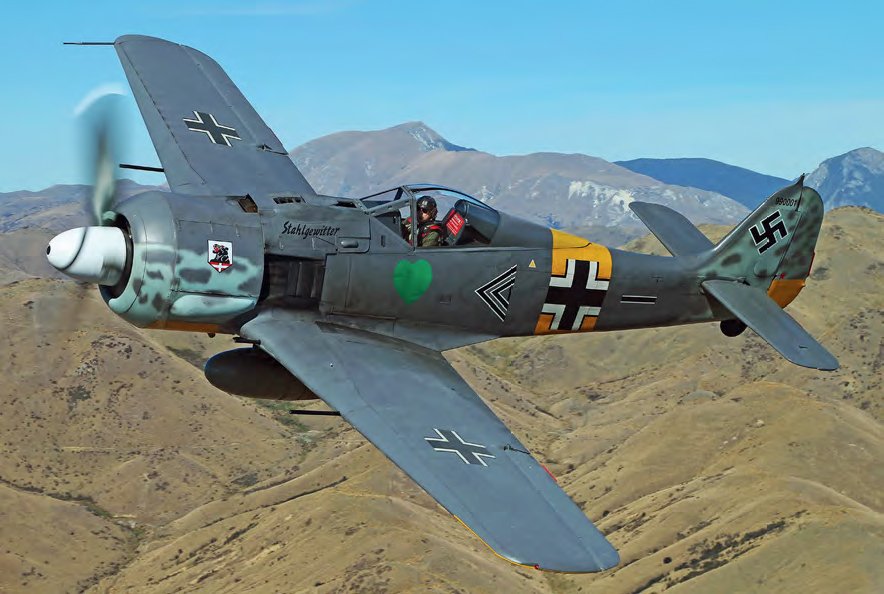 Frank Parker piloting the FW 190, which now wears the markings of wartime Luftwaffe Fw 190 unit JG 54 ‘Grünherz’. Incidentally, the varying use of the FW and Fw designations throughout this piece is deliberate, and correct in denoting either Flug Werk or Focke-Wulf.

The FW 190 is quite different. Around base at 120kt (220km/h), variable flap, across the fence at 85kt (160km/h), round out, power off and you stop flying. The rather harsh undercarriage oleos will exaggerate any skip into a bounce. It does not like three-pointers, so the best solution is a tail-down wheeler — with mediocre success. On the ground, the aircraft is lively despite the wide track. It keeps you on your toes.

These are two very disparate aircraft. The Spitfire is the quintessential British sports car: refined, predictable, comfortable, with the occasional quirk. The FW 190 is more of a rally car: noisy, rattly, efficiently functional. Above all, though, I have the upmost admiration for the men who flew the Supermarine and Focke-Wulf fighters in anger.