Front line pilots in any air force need to train in air-to-air combat. Such training may take the shape of engaging in DACT (Dissimilar Air Combat Training), engaging with colleagues flying a different kind of warplane or against specialised aggressor squadrons that use tactics and protocols of putative enemies. These missions may take place in day-to-day training or during international exercises. In the current polarized world scenario, it is highly unlikely that opposing sides in a conflict will be using the same aircraft type. Maintaining fleets of potential opponent aircraft is, for political and financial reasons, not possible. In whichever way air-to-air combat training is done it is expensive, and in the case of DACT uses up valuable flight hours on the eversmaller fleets of fighter aircraft. In the face of budget cuts stemming from the global financial crisis, there is a need to find new alternatives to the traditional combat training models that increase efficiency and reduce costs.

Draken International was formed to provide a much-needed adversary capability for air forces around the world. The company is currently a leader in providing specialized advanced aerial adversary services at a cost much lower than the traditional model, thanks to a fleet of fighters that currently numbers around 150 aircraft.

The decommissioning of both the French and Spanish fleets of Dassault Mirage F1 fighter bombers served as a golden opportunity to improve the capabilities of aerial services companies such as Draken International or Airborne Tactical Advantage Company (ATAC) in their race to enhance the capabilities offered to their principle clients, the US Air Force and US Navy.

The withdrawal of the Mirage F1M from Spain’s Ejército del Aire (EA or Air Force) took place in 2013, when the last operator – Ala 14 at Albacete Air Base – re-equipped with the modern Eurofighter. When they were withdrawn from service many of Spain’s Mirages had considerably fewer than 6,000 flight hours on the airframe, the limit established by the manufacturer as the useful service life, and had undergone a series of major systems and capabilities upgrades at the end of the 1990s.

In this view taken in July 2018 one can see seven Mirage F1Ms parked on the MAESAL ramp awaiting disassembly. The former Qatari Mirage F1DDA twoseater visible amongst them is to be preserved at the Spanish Museo del Aire at Cuatro Vientos.
All images Roberto Yáñez unless noted

The introduction of Eurofighter led to the Mirages, after almost 40 years of valuable service, being relegated to supporting roles within the Spanish air defence system, including DACT. Interest in purchasing the jets from overseas, including from friendly nations such as Ecuador or Argentina, quickly led to the type’s withdrawal from service altogether.

After their retirement from active duty the aircraft were put in open storage at the Maestranza Aérea de Albacete (MAESAL or Albacete Air Depot), where they underwent some preservation work with a view towards a future sale. That work included the removal of sensitive items from the cockpit and avionics bay for safe-keeping, dismantling the hydraulic and fuel pumps and draining fluids. A small amount of fuel was left in the fuel tanks of each aircraft to maintain their integrity and prevent leaks. The ejection seats were also removed and stored with their explosive charges removed. The aircraft were then parked on the MAESAL ramp awaiting a buyer.

The first coordination meetings between Draken and the EA took place in August 2016 at the Mando de Apoyo Logístico (MALOG or Logistics Support Command) facilities in Madrid. The Draken delegation was headed by the company’s CEO Jared Isaacman and that of the EA by General Pino. During the subsequent negotiations an agreement was reached that called for the sale of nineteen single seaters and one two-seater, as well as spares and equipment, surplus to the EA’s operational squadrons’ requirements, for the maintenance and operation of the fleet. Furthermore, the EA agreed to help return the jets to flying status.

The sales contract was signed on September 8, 2017 and disassembly of the first aircraft for shipment to the United States started in January 2018. At the same time work began to prepare the jets’ auxiliary systems and personnel were hired and supporting companies and a legal framework for the activities was established. 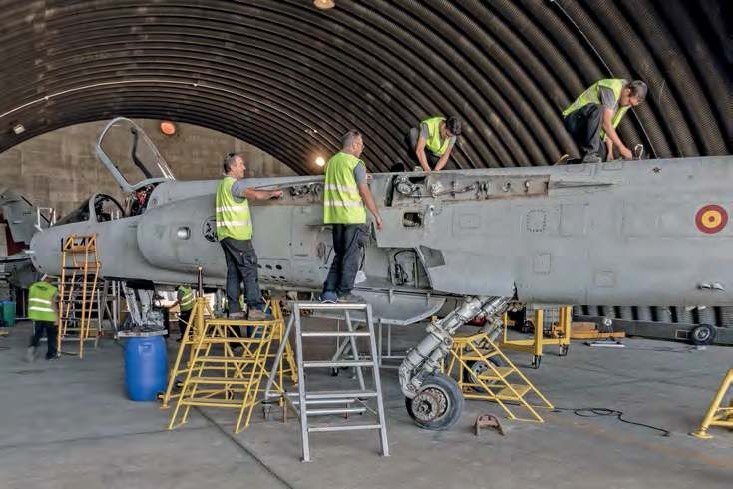 The entry into service of the Mirage F1M will allow Draken to better support the US Air Force at Nellis Air Force Base as part of the ADAIR (Adversary Air) II contract. 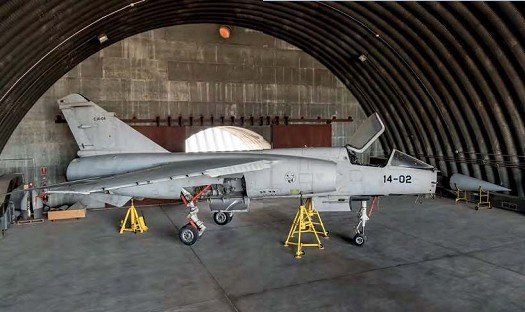 Serial number C.14-04 was one of the first Mirage F1CEs to arrive in Spain, it was upgraded to F1M standard. This aircraft was included as part of the sale to serve as a source of spares for the rest of the fleet. 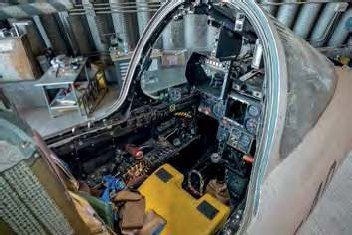 During the years that the aircraft were stored at Albacete some equipment was removed for preservation. 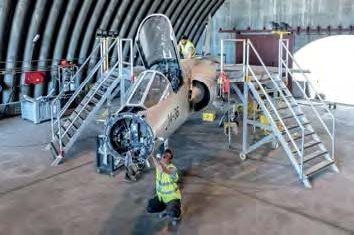 The package of Mirage F1Ms acquired by Draken from Spain includes 11 aircraft fitted with inflight refuelling probes - in this photo is one of the group, serial number C.14-63. 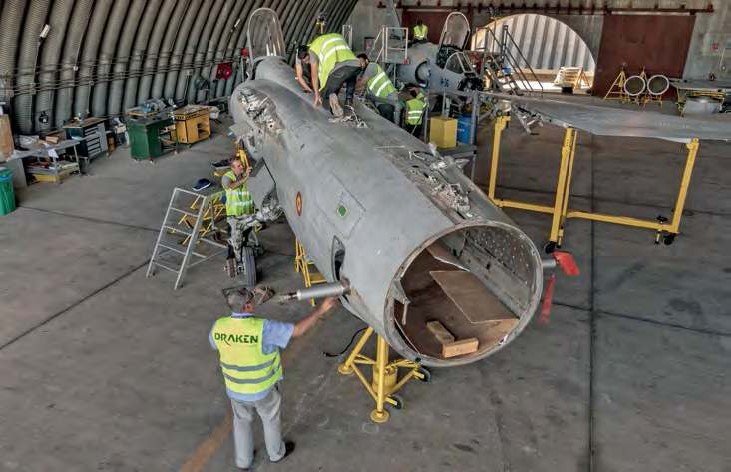 The work of disassembling the Mirage F1Ms is being undertaken at Albacete with the support of the Ejército del Aire.

According to the technical agreement between Draken International and the Spanish Ministry of Defence, all the material acquired by the American company must leave EA property before November 30, 2018.

Disassembly time has varied from one aircraft to another, although in general it has been stabilised at between three and four working weeks per unit. A sequence of tasks has been established to make the work as efficient as possible to be able to finish before the deadline. After checking the amount of fuel left in the tanks, work begins on removing the aircraft’s access panels. The horizontal stabilizers, vertical empennage and drag ‘chute container are also removed. At the same time the radome is removed along with the access panels where the wings join the fuselage. Once the wings are removed, the fuselage is cleaned along with the dismounted parts, then any holes are sealed prior to transport. The aircraft is then placed on jacks and the landing gear is raised and locked. At this point the logistics company DAMCO - a member of the Maersk Group - is charged with lifting and placing the aircraft on the shipping jig. Finally, after a road trip of about 200km (125 miles) each aircraft is loaded on a ship at the port of Valencia, where it begins its sea voyage to its final destination in Florida.

By July a total of ten aircraft had already been sent to the United States, while another three were in various phases of being taken apart. The EA provides two shelters close to the MAESAL ramp, where the aircraft were stored, for the disassembly process. Warehouses and offices were set aside at MAESAL and the nearby air base to package material, and offices space for all the administrative details.

The EA not only provided material support but also a sizeable number of personnel. Since it is responsible for the stored material, MAESAL managed the work of cataloguing the F1M fleet, equipment and spare parts. In practice this has led to not just managing and documenting the huge amount of material present at Albacete - the last Mirage F1M base in Spain - but also documenting equipment stored at other sites around the country. For example, a lot of the available engines and a large number of spares are at the Centro Logístico de Intendencia (CLOIN or Logistics and Supply Center) at Torrejón Air Base near Madrid. This base is also the site of the operational light programme (OFP) programming bench, located at the Centro Logístico de Armamento y Experimentación (CLAEX or Armament and Experimentation Logistics Center). The OFP programming bench enables Draken to update the aircraft’s software if the firm should decide to integrate new equipment in the future.

Around 50 ATAR 9K-50 engines are needed to maintain the fleet of 34 Mirages (20 Spanish F1Ms, 12 former South African Denel Cheetahs and two French Mirage F1B two-seaters) that Draken has purchased. There are around 12 engines at Torrejón Air Base that require minimal work to get them up and running - this should be enough to cover initial needs until the rest of the engines in Spain can be overhauled. 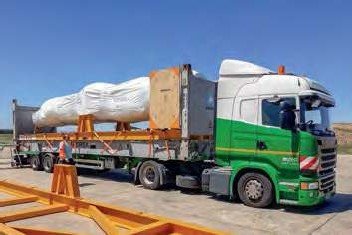 Packed and ready for transport by road to Valencia port, C14-67/14-39 is seen here on its shipping jig covered by a protective bag.
Draken International 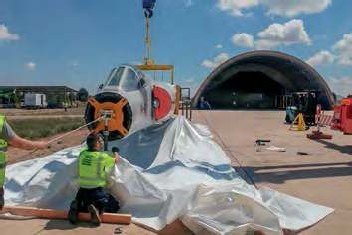 After having been disassembled, Mirage F1M C14-70/14-42 is being prepared for the long sea voyage to Florida. In the background is one of the two Albacete Air Base shelters temporarily used by Draken.
Draken International 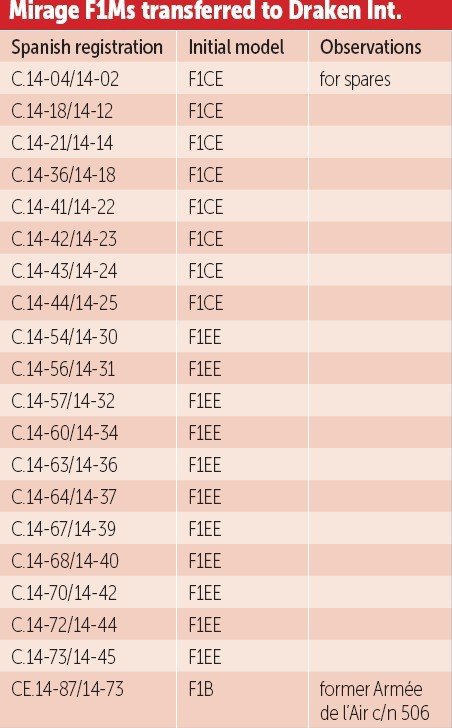 However, the critical factor when it comes time to returning the aircraft to service is not the engines, but the ejection seats. These were ready to be sent to Martin-Baker USA at the end of July for their overhaul and repair. Therefore, the return to service of the fleet is dependent on when Martin-Baker finishes the work.

Once it is ready, the fleet of Mirage F1s will allow Draken to offer an attractive platform to satisfy DACT requirements both for the US Air Force and US Navy, by being able to replicate fourth-generation aircraft effectively. Apart from its robust construction, low fuel consumption, supersonic speed, good range and a powerful radar, there is a good supply of spares available and there is the support of companies that specialize in working with the type, such as the South African firm Paramount Aerospace Systems which is involved in reassembling the fleet in the United States. This means that the Mirage F1 is the ideal type to complement the fleets of existing aggressor organisations. This will allow for scenarios that are more realistic and complex than the ones currently used, providing for a clear improvement in the training of front line pilots.

Currently the Draken fleet of A-4 and L-159 aircraft are undergoing a modernisation programme called ‘Red Storm’ that will enable the jets’ pilots to use a helmet-mounted cueing system, high off-boresight captive training missiles and datalink technology, resulting in a force multiplying architecture of advanced capabilities. In the future it is planned to add similar improvements to the Mirage F1 and Cheetah fleets currently being introduced to Draken’s growing fleet. 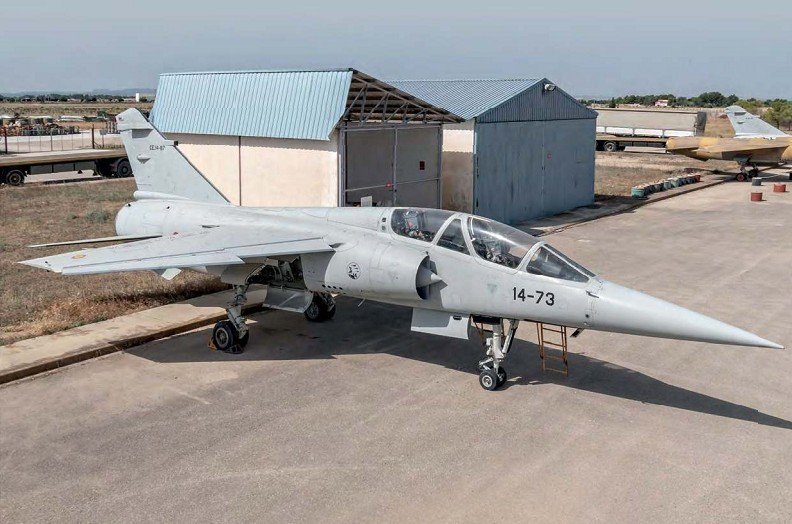