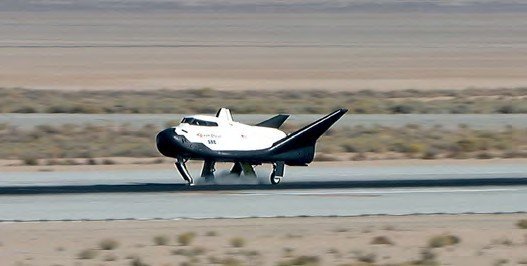 The Dream Chaser touches down at Edwards Air Force Base at the end of its first free-flight test.
Sierra Nevada Corporation

A Sierra Nevada Corporation Dream Chaser recently completed a successful free-flight test. Lifted to 12,400ft (3,779m) by a Colombia Helicopters Model 234- UT Chinook, the Dream Chaser was released and flew along a pre-planned flight path before landing at Edwards Air Force Base, California to verify approach and landing performance. The flight was part of an ongoing series of tests being carried out at the NASA Armstrong Flight Research Centre. The Dream Chaser is designed to provide commercial transport services to low-Earth orbit and a reusable utility capability. It has been selected by NASA to provide cargo delivery and disposal services to the International Space Station. Mark Broadbent