THIRTY-five years after it was recovered from the depths of Loch Doon in South Ayrshire, Supermarine Spitfire IIa P7540 was unveiled in front of an audience of more than 2,000 visitors at the Dumfries and Galloway Aviation Museum at Tinwald Downs on 16 July, The aircraft is now on permanent display in a new purpose-built hangar.

Curator David Reid commented: “This has been a long time coming for us, but we are immensely proud to finally have this aircraft on display. It is the only combat veteran Spitfire in Scotland, with a fascinating history from the Battle of Britain to a training aircraft for Czech pilots. The next stage of its restoration can now begin, as we refit the cockpit and carry out detail work on the rest of the airframe. Eventually, we intend to allow visitors to sit in the aircraft, although this will take some time to achieve. However, to unveil the aircraft in this, our 40th anniversary year, is a tremendous achievement for a small volunteer museum.”

It took a five-year search, involving more than 567 separate dives, to locate the wreck, which was brought to the surface in the summer of 1982. The restoration has involved many museum volunteers and outside groups: fuselage work was carried out by the Aircraft Restoration Group at Pickhill, near Thirsk in north Yorkshire, and the replica wings were supplied by Gateguards UK in Cornwall. 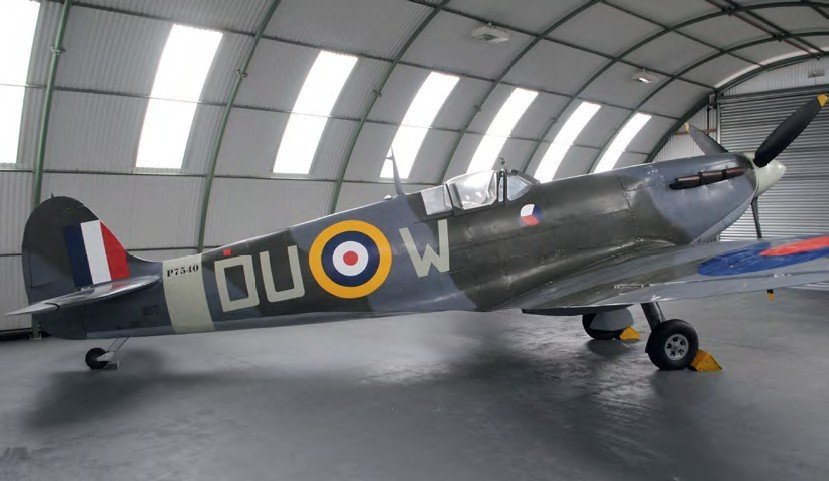 Spitfire IIa P7540 wearing its freshly painted No 312 (Czechoslovak) Squadron markings at the Dumfries and Galloway Aviation Museum on 16 July.
VIA BOB SLOAN

“We are immensely proud to finally have this aircraft on display. It is the only combat veteran Spitfire in Scotland, with a fascinating history”

P7540 was built in October 1940 at Castle Bromwich and issued to No 66 Squadron at RAF Gravesend, Kent in time for the closing few days of the Battle of Britain. Among its pilots was Flt Lt Bobby Oxspring, with whom it saw combat on several occasions. It was also operated by Nos 609 and 266 Squadrons at Biggin Hill and Wittering before transferring to No 312 (Czechoslovak) Squadron on 6 July 1941.

312 was at the time flying Hurricanes from RAF Ayr, but it re-equipped with the Spitfire Vb at the end of the year. Six war-weary examples of the Spitfire IIa, including P7540, were used to aid the transition. P7540 crashed on 25 October 1941 while being flown by 26-year-old Fg Off František Hekl on a familiarisation sortie. It was only his second Spitfire flight. While passing low over Loch Doon, the Spitfire’s starboard wing struck the surface and the aircraft crashed. Hekl’s body was never found and he is commemorated on a memorial at the side of the loch.