With three of the four prototypes already flying by the end of 2016 and a fourth to follow early in 2017, and with over 20% of the flight test campaign behind it, Embraer is confident that the first variant of its new E-Jet E2 family, the E190-E2, is on track for service entry in 2018.

In fact, so confident is the Brazilian aircraft manufacturer in its new product that it crossed the Atlantic with the first prototype in July to attend the Farnborough International Airshow, less than two months after its maiden flight.

The 97-114 seat E190-E2 will be followed into service by the larger capacity (120 to 146 seats) E195-E2 in 2019 and the E175-E2 (80 to 90 seats) in 2021. The E175-E2 had originally been planned for certification in 2020, a year behind the E195-E2, but in December 2016 Embraer announced a year’s slippage, reportedly due to the current resurgence in sales of the first generation E175, particularly in the North American market. With total commitments reaching 690 aircraft (including 283 firm orders), from airlines or leasing companies distributed across the three new variants, Embraer is also confident it has a worthy successor to its original E-Jet family on its hands.

Following what it describes as a ‘long, rigorous and technical assessment’, Embraer launched its E-Jet E2 family at the Paris Air Show in June 2013. The company also announced at the time that it had received orders from SkyWest Airlines (100 firm E175-E2 aircraft, plus 100 options), ILFC (a letter of intent for 25 E190-E2s and 25 E195-E2 jets, plus options on an additional 25 of each); and letters of intent for 65 E2 family aircraft from five undisclosed airlines from Africa, Asia, Europe and Latin America.

Although maintaining some commonality with the original E-Jet family, the new airliners would each have a new high aspect ratio wing specifically tailored to its requirements, together with aerodynamic improvements to the airframe, an updated cockpit, fourth-generation fly-by-wire (FBW) flight controls and Pratt and Whitney PurePower geared turbofan engines.

During the launch ceremony in Le Bourget, Paulo Cesar Silva, President and CEO of Commercial Aviation, said: “Our strategy is to offer all the benefits of a clean sheet design, but with the reliability of a mature platform and commonality with current generation E-Jets.” By the time of the launch announcement, it was estimated that Embraer had invested around $1.7 billion in the E2 programme. 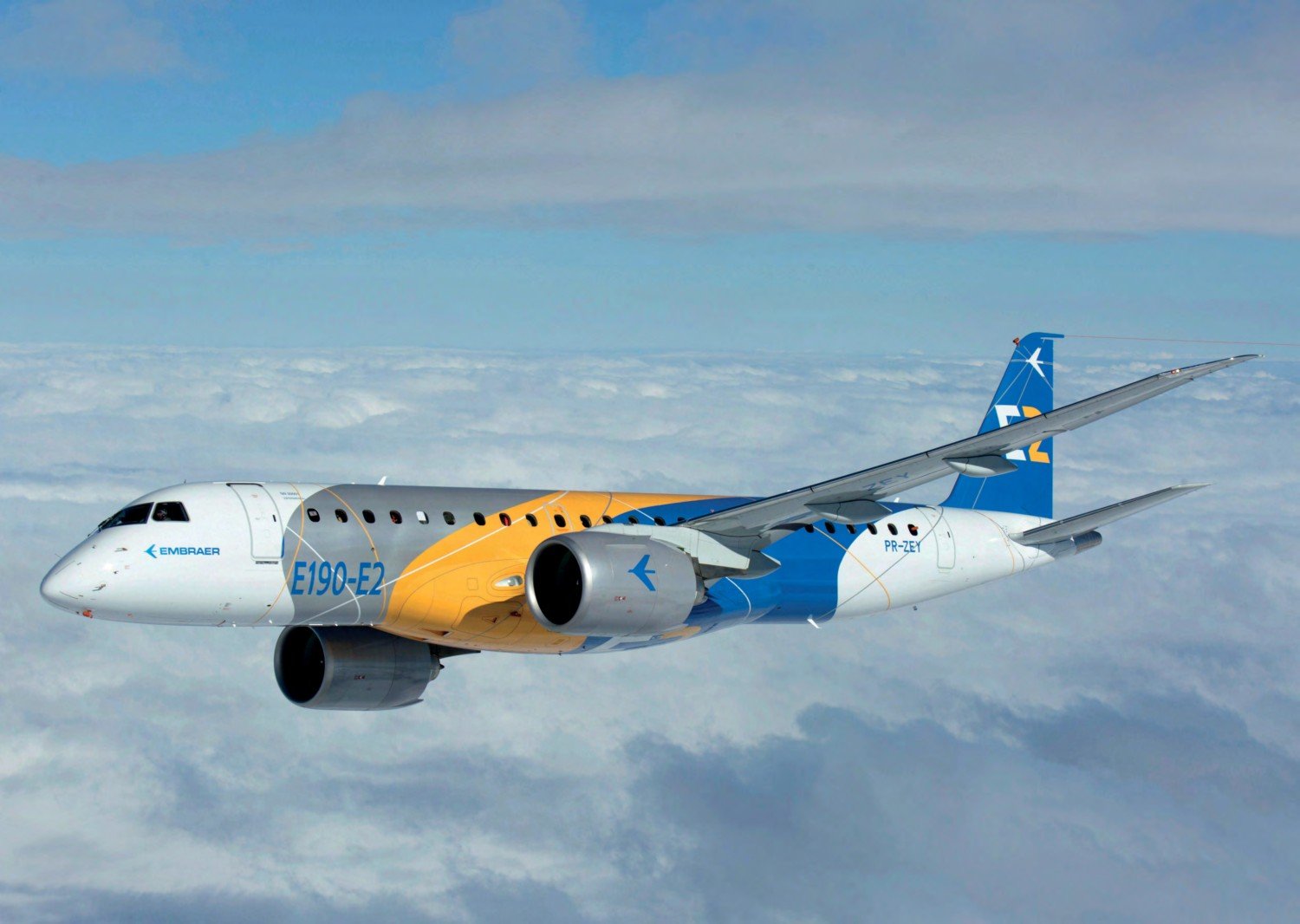 The first metal was cut on the first component for the initial prototype E190-E2, a wing stub forward pressure bulkhead, at Embraer’s facility in Évora in Portugal in October 2014; by the time of the 2015 Paris Air Show, components had begun arriving at the final assembly line in Brazil.

The prototype was rolled out in a ceremony at São José dos Campos on February 25, 2016, and although originally planned to make its maiden flight in the second half of the year, it fiew for the first time just three months later on May 23, marking the beginning of the certification campaign.

After the flight, test pilot and commander Captain Mozart Louzada commented: “There are always a lot of expectations with a first flight and today’s was not an exception. The flight was very smooth. We were able to significantly open the flight envelope by flying at Mach 0.82, climbing to 41,000ft and retracting the landing gear and flaps, and engaging the fly-by-wire in a normal mode.”

Speaking at the Singapore Air Show in February 2016, Embraer’s Chief Commercial Officer, John Slattery, said that the E2 series has been designed after listening to what customers desired in terms of aircraft size (seating capacity), capabilities and range.

He said: “For example, we increased the cabin of the E195-E2 [over the first generation E195] by three rows, but the customers told us not to touch the E190, because the industry wanted a 100-seater. The E175-E2 has been increased by one row, so we believe we have ‘right-sized’ the fleet to the market-place.” Embraer has not pursued a second-generation equivalent to the original 66–78 seat E170.

Unlike the earlier generation of aircraft, each of the new variants has a new, higher aspect ratio wing, which is more aerodynamically efficient and tailored to the size of the aircraft. Together with the new engines and various aerodynamic improvements to the airframe, including main landing gear doors that completely enclose the wheels, Embraer claims a reduction in fuel burn of 16% for the E175-E2 (with 80 seats vs 76 seats for the E175) and E190 (97 seats vs 97 seats) and a 24% improvement for the E195 (120 seats vs 106).

On the flight deck, the Honeywell Primus Epic integrated avionics system of the earlier generation E-Jets has been replaced with the Epic 2 system, offering a 45% larger display area, advanced graphics capabilities and Honeywell’s Next Generation Flight Management Systems. Symbology and pilot interface will be similar between the two generations of aircraft, and Embraer Commercial Aviation’s Vice President Marketing, Rodrigo Silva e Souza, says that one of the key drivers of the design is commonality with the first-generation E-Jets.

The Honeywell Primus Epic 2 avionics system will be an evolution of the existing Primus Epic on the current E-Jets, with larger displays and improved processing capability that, according to Silva e Souza, provides enough capability to accommodate current applications, with allowance for growth margin for future applications.

He said: “Pilots flying the currentgeneration E-Jets need just three days of training to migrate to the E2, less than two days of ground school, and you don’t need a full flight simulator or high-level flight training devices. It will be a common type rating between the first and second-generation aircraft.”

The passenger cabin has also received significant enhancements when compared to the earlier E-Jet; the overhead stowage bins have been enlarged and can accept the standard roll-on cabin bag, stowed wheels first.

“With this aircraft, there is more baggage space inside the cabin. You can carry one bag per seat in the overhead bin, something that is not possible in most airliners,” said Silva e Souza.

A further innovation is the option of Embraer’s staggered first/business class seat, which it says provides around 50in (1.27m) more legroom without compromising total seat count. 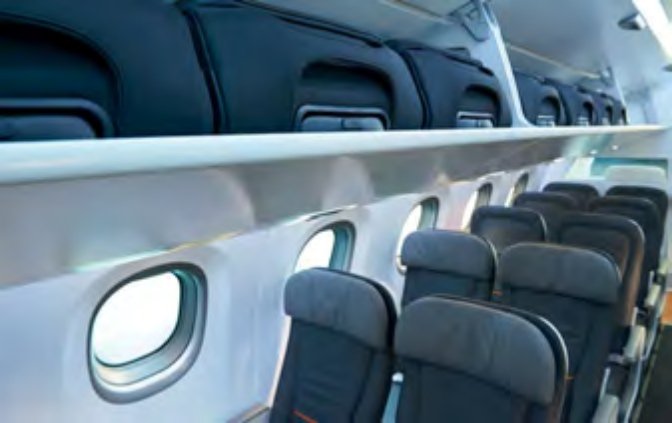 Compared to the earlier E-Jet the overhead stowage bins have been enlarged and can accept the standard roll-on cabin bag, stowed wheels first. 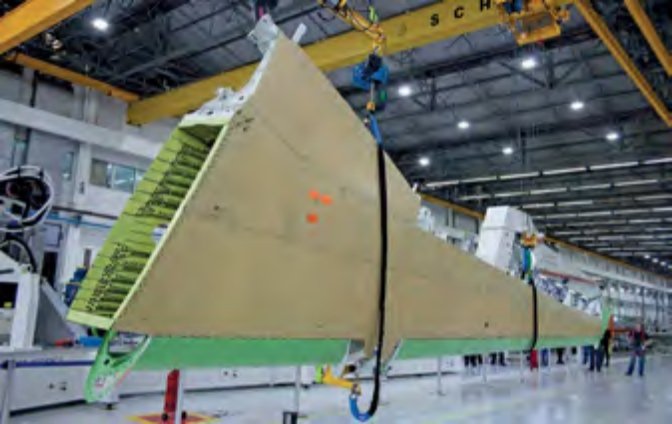 Each of the new E-Jet variants has a new, higher aspect ratio wing, which is more aerodynamically efficient and tailored to the size of the aircraft.

Two of the three E190-E2s involved in the flight test campaign; these aircraft will be joined by a fourth prototype in early 2017. Nigel Pittaway

The successful first flight of the prototype on May 23, 2016, lasted for three hours and 20 minutes and included flight parameter verification, speed and handling qualities and cycling of the landing gear.

Following the inaugural flight, the aircraft (PT-ZEY, c/n 20001) relocated to Embraer’s test airfield at Gavião Peixoto, where it has been joined in the flight test campaign by the second and third aircraft (PT-ZFU, c/n 20002 and PT-ZFV, c/n 20003). A fourth prototype (c/n 20004), fitted with a representative cabin interior, is due to fly early in 2017.

Silva e Souza commented: “On the first flight, the aircraft fully functional, we went to maximum speed, we went to the highest altitude, we engaged the alternate mode of the FBW flight control system – everything was functional and the landing gear was retracted and extended. We fiew the aircraft at the end of May and in less than two months we were crossing the Atlantic to show the aircraft at Farnborough, with absolutely no technical issues.”

By early November 2016 the three aircraft in the flight test campaign had accumulated 280 flight test hours and a further 370 hours of ground testing, representing about 20% of the E190-E2 certification process. In addition to this, the certification programme has accumulated approximately 21,000 hours of testing using specialised test rigs, including the ‘iron bird’ rig used to replicate the operation of aircraft systems such as hydraulics and pneumatics.

“So far the flight test results are on target with our predictions. Everything we are seeing confirms those predictions,” Souza e Silva reported. “Some of the tests already performed include envelope expansion, ground loads calibration and in-flight thrust determination. Other tests, such as stall, climb performance and brake system evaluation, are ongoing and up to now the aircraft is achieving its design targets.”

The first aircraft is mainly engaged in the performance of systems, loads, aero elasticity, external noise and crosswind testing, assisted by the second prototype. Aircraft 20002 will also be used for performance verification flights. The third prototype will be the primary aircraft used in the completion of handling qualities testing, including icing trials.

Souza e Silva said: “[The fourth prototype] will feature a production-series, full cabin interior and will measure comfort and internal noise levers, and it will be used to conduct specific tests, such as cabin evacuation verification.”

Prior to its first flight, c/n 20004 has been engaged in ground testing of the type’s ability to withstand lightning strikes. The first phase of this testing began in early November and simulated electrical discharges from a series of structures surrounding the aircraft. The induced current passing through a critical components harness was then measured to evaluate the effects of lightning strikes. Following the month-long series of tests, phase two testing began in December, and will validate the data gathered from the aircraft in test laboratories.

In addition to the four E190-E2 flight test aircraft, Embraer will use two additional E195-E2 and three E175-E2 jets for certification of those variants in 2019 and 2021 respectively. 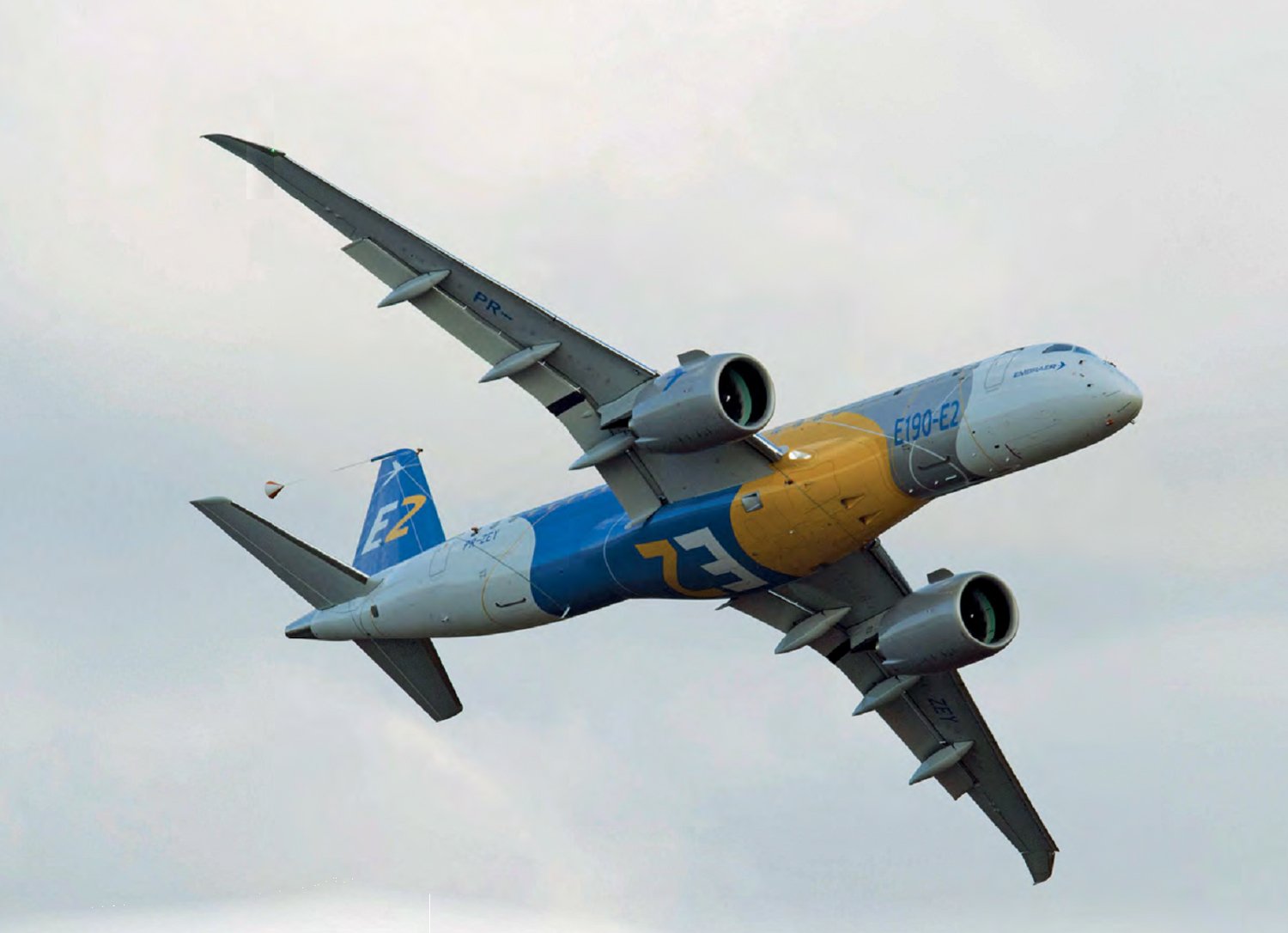 By early November 2016 the three flight test aircraft had completed about 20% of the E190-E2 certification process; approximately 21,000 hours of testing using specialised static test rigs had also been completed. 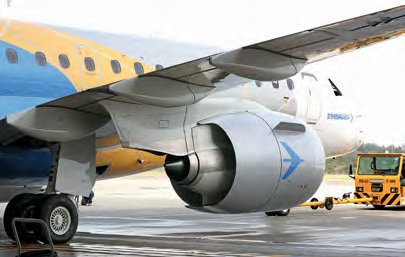 Although Embraer says there are no current plans to end production of the current E-Jet family until at least 2020, it forecasts the E2 series will continue its success in the market segment into the future.

Silva e Souza concluded: “The E2 family has already been very successful; we have 670 total commitments, with a really good list of customers. This number is about twice what we had for the first generation of E-Jets at the same stage of development. We have achieved close to 1,500 orders for the first generation aircraft and we believe that the E2 will be even more successful.” 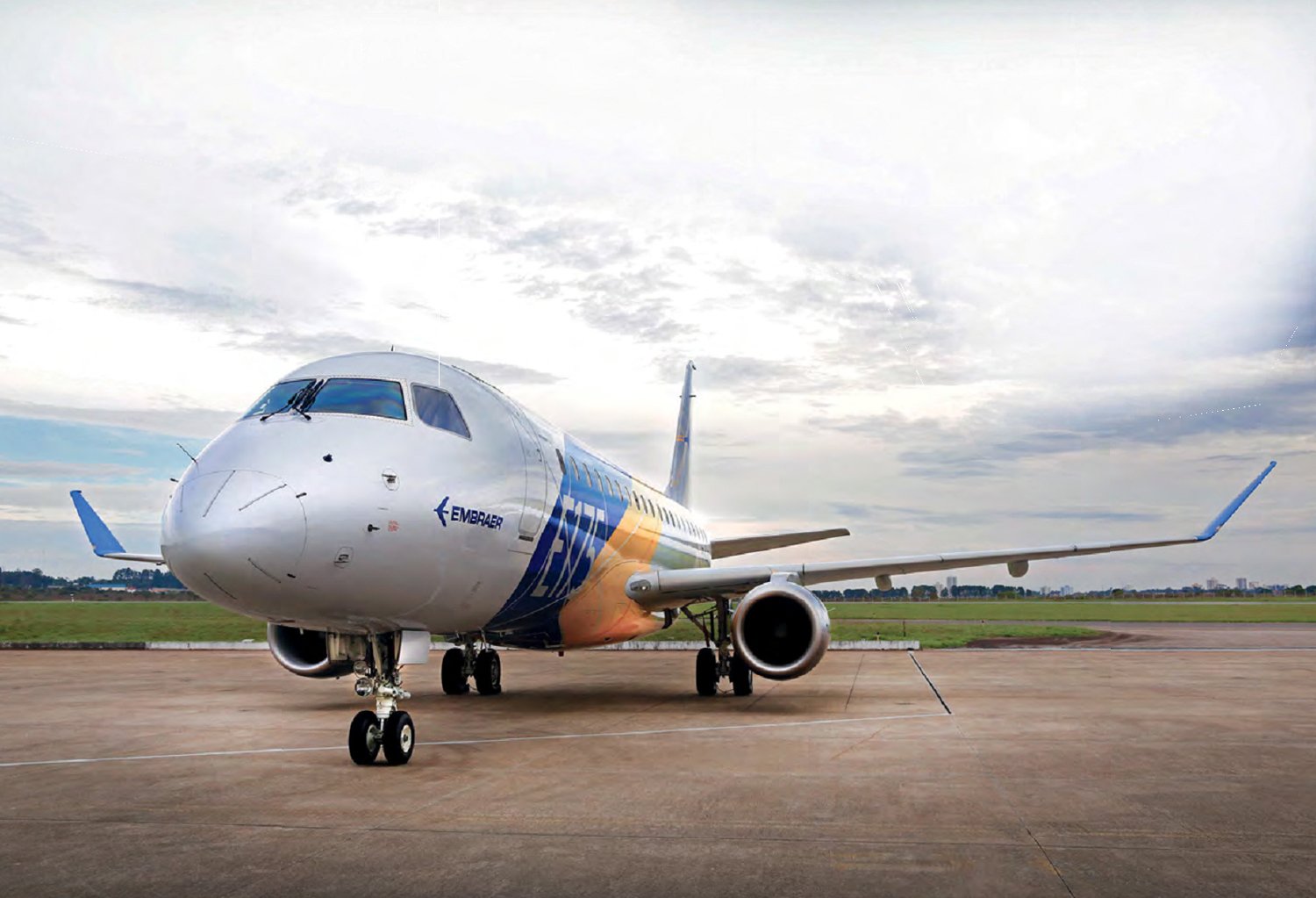