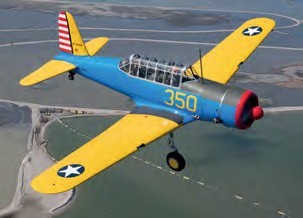 Two weeks before the first flight of the Nieuport, Vultee BT-13 Valiant 42-43210/N313BT took to the air from Lelystad, having arrived from the USA in a container during January. A BT-13 had long been on the wish-list of Jaap van Mesdag, the founder of the Early Birds, who died in October 2015. A team had been assigned by Jaap to secure the continuation of the collection prior to his death. They had two very good reasons to add a BT-13: Jaap’s logbook records his first flight in a BT-13 on 28 May 1949, and the type boasts World War Two Dutch military history, having equipped the Royal Netherlands Military Flying School at Jackson Army Air Field, Mississippi, providing basic training for Dutch pilots.