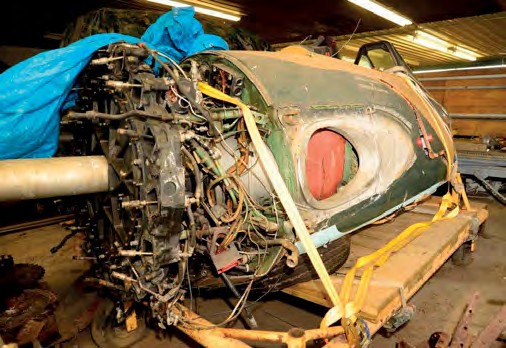 The fuselage pod of Vampire F3 N6878D in storage at the Air Land Sea Museum at Markham Airport, Toronto.
VIA MARK PEAPELL

The National Air Force Museum of Canada at Trenton has acquired the ex-John Travolta de Havilland Vampire F3, N6878D, which was the oldest flying jet aircraft in the world before being damaged in an emergency landing at Rochester, New York on 4 June 2009.

The 1947 English Electric-built fighter is currently stored at the Air Land Sea Museum at Markham Airport, Toronto. At the time of the accident it was owned by Wings of Flight Inc of Rochester. Pilot Peter Treicher had taken off after the Wings over Rochester show when the de Havilland Goblin engine lost power, and in the ensuing forced landing the underside of the nose of the wooden fuselage pod was badly

Originally built for the RAF as VP773, the Vampire was soon transferred to the Royal Canadian Air Force. After being shipped to Canada it was assembled at the de Havilland Canada plant at Downsview and given the serial 17072. It was allocated to the first RCAF unit to operate jet fighters, No 410(F) Squadron at St Hubert, Montréal, and between May 1949-August 1951 was one of the aircraft flown by the unit’s Blue Devils aerobatic display team.

Formed by 15-kill Spitfire ace Flt Lt (later Lt Gen) Donald Laubman, the team started off with three aircraft, but after gaining official recognition from the Air Defence Group shortly after its first show at RCAF Rockcliffe, Ontario on 11 June 1949 it became a six-ship outfit. During 1950 the team was officially named the Air Defence Group Aerobatic Team, and prior to disbandment following a display at the Michigan Air Fair in Detroit on 19 August 1951 had performed at 45 airshows across Canada and the USA.

The RCAF retired the Vampire F3 in 1958, and 17072 was one of 27 examples sold to Fliteways Inc of West Bend, Wisconsin for conversion into business jets. Although this plan fell through, 17072 was acquired by John E. Morgan of Pittsburgh, who flew it in airshows as ‘Johnny Skyrocket’. Legendary film flyer Frank G. Tallman of Orange County, California, acquired the machine in 1959 and put it on show at his Movieland of the Air Museum. After passing through the hands of several more owners, the Vampire was sold to John Travolta in 1988, rebuilt and flown in a Battle of Britain-esque brown/green colour scheme before the actor relinquished ownership of the historic machine in the mid-1990s. Once at Trenton it will be restored back to its original RCAF markings and go on display close to the museum’s star exhibit, Handley Page Halifax VII NA337.